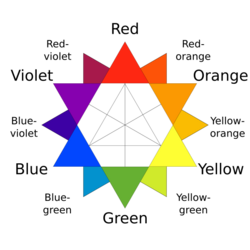 Blue-green is the color that is between green and blue. It belongs to the cyan family of colors. 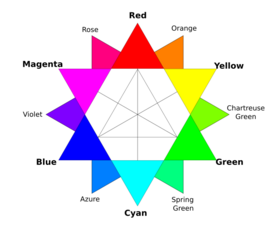 Cyan, also called aqua, is the blue-green color that is between blue and green on a modern RGB color wheel. 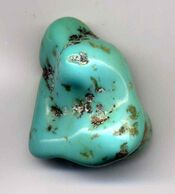 A sample of turquoise

The color turquoise, a representation of the color of the semi-precious stone turquoise.

The first recorded use of turquoise as a color name in English was in 1573.[2]

The color "turquoise" is a light tone of blue-green.

Bondi blue is a color belonging to the cyan family of blues. It is very similar to the Crayola crayon color "blue-green".

Apple, Inc. christened the color of the back of the original iMac computer "bondi blue" when it was introduced in 1998. It is said to be named for the color of the water at Bondi Beach, in Sydney, Australia.

One definition of the color is in the Munsell color system (Munsell 5BG) although there is wide-spread acceptance and knowledge of the colour from the so called blue-green algae which have been recognised and described since the 18th century and probably before that.

This section is an excerpt from Cerulean[ edit ]

Cerulean (/səˈruːliən/), also spelled caerulean, is a shade of blue ranging between azure and a darker sky blue.

The first recorded use of cerulean as a colour name in English was in 1590.[3] The word is derived from the Latin word caeruleus, "dark blue, blue, or blue-green", which in turn probably derives from caerulum, diminutive of caelum, "heaven, sky".[4]

This section is an excerpt from Teal[ edit ]

alt=American teal duck (male)|thumb|Green-winged teal (male) Teal is a light greenish blue color. Its name comes from that of a bird — the Eurasian teal (Anas crecca) — which presents a similarly colored stripe on its head. The word is often used colloquially to refer to shades of cyan in general.

It can be created by mixing cyan into a green base, or deepened as needed with black or gray.[5] The complementary color of teal is pink. It is also one of the first group of 16 HTML/CSS web colors formulated in 1987. In the RGB model used to create colors on computer screens and televisions, teal is created by reducing the brightness of cyan to about one half.

Teal was a fad color during the 1990s, with, among others, many sports teams adopting the color for their uniforms.[6][7] 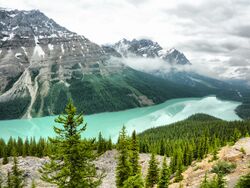