Sodium and fluorine bonding ionically to form sodium fluoride. Sodium loses its outer electron to give it a stable electron configuration, and this electron enters the fluorine atom exothermically. The oppositely charged ions are then attracted to each other. The sodium is oxidized; and the fluorine is reduced.

File:16. Реакција меѓу силно оксидационо и редукционо средство.webm Redox (reduction–oxidation, pronunciation: /ˈrɛdɒks/ RED-oks or /ˈriːdɒks/ REE-doks[1]) is a type of chemical reaction in which the oxidation states of atoms are changed. Redox reactions are characterized by the actual or formal transfer of electrons between chemical species, most often with one species (the reducing agent) undergoing oxidation (losing electrons) while another species (the oxidizing agent) undergoes reduction (gains electrons).[2] The chemical species from which the electron is removed is said to have been oxidized, while the chemical species to which the electron is added is said to have been reduced. In other words:

Many reactions in organic chemistry are redox reactions due to changes in oxidation states but without distinct electron transfer. For example, during the combustion of wood with molecular oxygen, the oxidation state of carbon atoms in the wood increases and that of oxygen atoms decreases as carbon dioxide and water are formed. The oxygen atoms undergo reduction, formally gaining electrons, while the carbon atoms undergo oxidation, losing electrons. Thus oxygen is the oxidizing agent and carbon is the reducing agent in this reaction.[3]

Although oxidation reactions are commonly associated with the formation of oxides from oxygen molecules, oxygen is not necessarily included in such reactions, as other chemical species can serve the same function.[3]

Redox reactions can occur relatively slowly, as in the formation of rust, or much more rapidly, as in the case of burning fuel. There are simple redox processes, such as the oxidation of carbon to yield carbon dioxide (CO2) or the reduction of carbon by hydrogen to yield methane (CH4), and more complex processes such as the oxidation of glucose (C6H12O6) in the human body. Analysis of bond energies and ionization energies in water allow calculation of the redox potentials.[4][5]

"Redox" is a portmanteau of the words "reduction" and "oxidation". The word oxidation originally implied reaction with oxygen to form an oxide, since dioxygen (O2(g)) was historically the first recognized oxidizing agent. Later, the term was expanded to encompass oxygen-like substances that accomplished parallel chemical reactions. Ultimately, the meaning was generalized to include all processes involving the loss of electrons.

The word reduction originally referred to the loss in weight upon heating a metallic ore such as a metal oxide to extract the metal. In other words, ore was "reduced" to metal. Antoine Lavoisier demonstrated that this loss of weight was due to the loss of oxygen as a gas. Later, scientists realized that the metal atom gains electrons in this process. The meaning of reduction then became generalized to include all processes involving a gain of electrons.

The electrochemist John Bockris has used the words electronation and deelectronation to describe reduction and oxidation processes, respectively, when they occur at electrodes.[6] These words are analogous to protonation and deprotonation,[7] but they have not been widely adopted by chemists worldwide.

The term "hydrogenation" could often be used instead of reduction, since hydrogen is the reducing agent in a large number of reactions, especially in organic chemistry and biochemistry. However, unlike oxidation, which has been generalized beyond its root element, hydrogenation has maintained its specific connection to reactions that add hydrogen to another substance (e.g., the hydrogenation of unsaturated fats into saturated fats, R−CH=CH−R + H2 → R−CH2−CH2−R). The word "redox" was first used in 1928.[8] 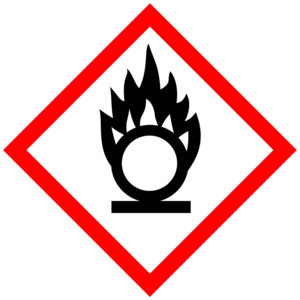 The international pictogram for oxidizing chemicals

Reductants in chemistry are very diverse. Electropositive elemental metals, such as lithium, sodium, magnesium, iron, zinc, and aluminium, are good reducing agents. These metals donate or give away electrons relatively readily. Hydride transfer reagents, such as NaBH4 and LiAlH4, are widely used in organic chemistry,[10][11] primarily in the reduction of carbonyl compounds to alcohols. Another method of reduction involves the use of hydrogen gas (H2) with a palladium, platinum, or nickel catalyst. The catalytic hydrogenation reaction is an important industrial process.

For a redox reaction that takes place in a cell, the potential difference is:

However, the potential of the reaction at the anode is sometimes expressed as an oxidation potential:

The oxidation potential is a measure of the tendency of the reducing agent to be oxidized but does not represent the physical potential at an electrode. With this notation, the cell voltage equation is written with a plus sign

Illustration of a redox reaction

This reaction is spontaneous and releases 542 kJ per 2 g of hydrogen because the H-F bond is much stronger than the weak, high-energy F-F bond. We can write this overall reaction as two half-reactions:

and the reduction reaction:

Analyzing each half-reaction in isolation can often make the overall chemical process clearer. Because there is no net change in charge during a redox reaction, the number of electrons in excess in the oxidation reaction must equal the number consumed by the reduction reaction (as shown above).

When adding the reactions together the electrons are canceled:

And the ions combine to form hydrogen fluoride:

The overall reaction is: 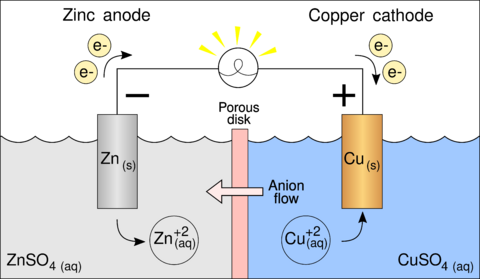 A redox reaction is the force behind an electrochemical cell like the Galvanic cell pictured. The battery is made out of a zinc electrode in a ZnSO4 solution connected with a wire and a porous disk to a copper electrode in a CuSO4 solution.

In this type of reaction, a metal atom in a compound (or in a solution) is replaced by an atom of another metal. For example, copper is deposited when zinc metal is placed in a copper(II) sulfate solution:

In the above reaction, zinc metal displaces the copper(II) ion from copper sulfate solution and thus liberates free copper metal. The reaction is spontaneous and releases 213 kJ per 65 g of zinc because relative to zinc, copper metal is lower in energy due to bonding via its partially filled d-orbitals.[4]

The ionic equation for this reaction is:

As two half-reactions, it is seen that the zinc is oxidized:

And the copper is reduced:

Redox reactions are the foundation of electrochemical cells, which can generate electrical energy or support electrosynthesis. Metal ores often contain metals in oxidized states such as oxides or sulfides, from which the pure metals are extracted by smelting at high temperature in the presence of a reducing agent. The process of electroplating uses redox reactions to coat objects with a thin layer of a material, as in chrome-plated automotive parts, silver plating cutlery, galvanization and gold-plated jewelry.(citation?)

Enzymatic browning is an example of a redox reaction that takes place in most fruits and vegetables.

Many important biological processes involve redox reactions. Before some of these processes can begin iron must be assimilated from the environment.[14]

Cellular respiration, for instance, is the oxidation of glucose (C6H12O6) to CO2 and the reduction of oxygen to water. The summary equation for cell respiration is:

Biological energy is frequently stored and released by means of redox reactions. Photosynthesis involves the reduction of carbon dioxide into sugars and the oxidation of water into molecular oxygen. The reverse reaction, respiration, oxidizes sugars to produce carbon dioxide and water. As intermediate steps, the reduced carbon compounds are used to reduce nicotinamide adenine dinucleotide (NAD+) to NADH, which then contributes to the creation of a proton gradient, which drives the synthesis of adenosine triphosphate (ATP) and is maintained by the reduction of oxygen. In animal cells, mitochondria perform similar functions. See the Membrane potential article.

Free radical reactions are redox reactions that occur as a part of homeostasis and killing microorganisms, where an electron detaches from a molecule and then reattaches almost instantaneously. Free radicals are a part of redox molecules and can become harmful to the human body if they do not reattach to the redox molecule or an antioxidant. Unsatisfied free radicals can spur the mutation of cells they encounter and are, thus, causes of cancer.

The term redox state is often used to describe the balance of GSH/GSSG, NAD+/NADH and NADP+/NADPH in a biological system such as a cell or organ. The redox state is reflected in the balance of several sets of metabolites (e.g., lactate and pyruvate, beta-hydroxybutyrate, and acetoacetate), whose interconversion is dependent on these ratios. An abnormal redox state can develop in a variety of deleterious situations, such as hypoxia, shock, and sepsis. Redox mechanism also control some cellular processes. Redox proteins and their genes must be co-located for redox regulation according to the CoRR hypothesis for the function of DNA in mitochondria and chloroplasts.

Wide varieties of aromatic compounds are enzymatically reduced to form free radicals that contain one more electron than their parent compounds. In general, the electron donor is any of a wide variety of flavoenzymes and their coenzymes. Once formed, these anion free radicals reduce molecular oxygen to superoxide and regenerate the unchanged parent compound. The net reaction is the oxidation of the flavoenzyme's coenzymes and the reduction of molecular oxygen to form superoxide. This catalytic behavior has been described as a futile cycle or redox cycling.

Mi Vida uranium mine, near Moab, Utah. The alternating red and white/green bands of sandstone correspond to oxidized and reduced conditions in groundwater redox chemistry.

In geology, redox is important to both the formation of minerals and the mobilization of minerals, and is also important in some depositional environments. In general, the redox state of most rocks can be seen in the color of the rock. The rock forms in oxidizing conditions, giving it a red color. It is then "bleached" to a green—or sometimes white—form when a reducing fluid passes through the rock. The reduced fluid can also carry uranium-bearing minerals. Famous examples of redox conditions affecting geological processes include uranium deposits and Moqui marbles.(citation?)

Electron transfer reactions are central to myriad processes and properties in soils, and electron "activity", quantified as Eh (platinum electrode potential (voltage) relative to the standard hydrogen electrode) or pe (analogous to pH as -log electron activity, is a master variable, along with pH, that controls and is governed by chemical reactions and biological processes. Early theoretical research with applications to flooded soils and paddy rice production was seminal for subsequent work on thermodynamic aspects of redox and plant root growth in soils.[15] Later work built on this foundation, and expanded it for understanding redox reactions related to heavy metal oxidation state changes, pedogenesis and morphology, organic compound degradation and formation, free radical chemistry, wetland delineation, soil remediation, and various methodological approaches for characterizing the redox status of soils.[16] [17]

Describing the overall electrochemical reaction for a redox process requires a balancing of the component half-reactions for oxidation and reduction. In general, for reactions in aqueous solution, this involves adding H+, OH−, H2O, and electrons to compensate for the oxidation changes.

In acidic aqueous media, H+ ions and water are added to half-reactions to balance the overall reaction.

Adding these two reactions eliminates the electrons terms and yields the balanced reaction:

In basic aqueous media, OH− ions and water are added to half-reactions to balance the overall reaction.

For example, in the reaction between potassium permanganate and sodium sulfite:

Balancing the number of electrons in the two half-cell reactions gives:

Adding these two half-cell reactions together gives the balanced equation:

The key terms involved in redox are often confusing.[18][19] For example, a reagent that is oxidized loses electrons; however, that reagent is referred to as the reducing agent. Likewise, a reagent that is reduced gains electrons and is referred to as the oxidizing agent.[20] These mnemonics are commonly used by students to help memorise the terminology:[21]