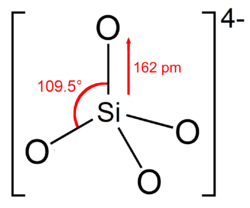 Structure of the orthosilicate anion SiO4−4

In chemistry, a silicate is any member of a family of polyatomic anions consisting of silicon and oxygen, usually with the general formula [SiO(4-2x)−4−x]n, where 0 ≤ x < 2. The family includes orthosilicate SiO4−
4 (x = 0), metasilicate SiO2−
3 (x = 1), and pyrosilicate Si
2O6−
7 (x = 0.5, n = 2). The name is also used for any salt of such anions, such as sodium metasilicate; or any ester containing the corresponding chemical group, such as tetramethyl orthosilicate.[1]

In geology and astronomy, the term silicate is used to mean silicate minerals, ionic solids with silicate anions; as well as rock types that consist predominantly of such minerals. In that context, the term also includes the non-ionic compound silicon dioxide SiO
2 (silica, quartz), which would correspond to x = 2 in the general formula. The term also includes minerals where aluminium or other tetravalent atoms replace some of the silicon atoms, as in the aluminosilicates. Such silicates comprise most of Earth's crust and mantle, as well as the other terrestrial planets, rocky moons, and asteroids.

For diverse manufacturing, technological, and artistic needs, silicates are versatile materials, both natural (such as granite, gravel, and garnet) and artificial (such as Portland cement, ceramics, glass, and waterglass).

The name "silicate" is sometimes extended to any anions containing silicon, even if they do not fit the general formula or contain other atoms besides oxygen; such as hexafluorosilicate [SiF
6]2−.

In most commonly encountered silicates, including almost all silicate minerals, each silicon atom occupies the center of an idealized tetrahedron whose corners are four oxygen atoms, connected to it by single covalent bonds according to the octet rule. This structure-bonding scenario does not describe the nature of silicate minerals under high pressures, which is the situation for most terrestrial silicate minerals.

These tetrahedra may occur as isolated orthosilicate anions SiO4−4, but two or more silicon atoms can be joined with oxygen atoms in various ways, to form more complex anions, such as pyrosilicate Si2O6−7 or the metasilicate ring hexamer Si6O12−18. Polymeric silicate anions of arbitrarily large sizes can have chain, double chain, sheet, or three-dimensional structures.

Typically, each oxygen atom that does not contribute a negative charge to the anion is a bridge between two silicon atoms. The structure of such anions is commonly described and depicted as consisting of silicon-centered tetrahedra connected by their vertices, in such a way that each vertex is shared by at most two tetrahedra.

Although the tetrahedron is the common coordination geometry for silicon compounds, silicon may also occur with higher coordination numbers. For example, in the anion hexafluorosilicate SiF2−6, the silicon atom is surrounded by six fluorine atoms in an octahedral arrangement. This structure is also seen in the hexahydroxysilicate anion Si(OH)2−6 that occurs in thaumasite, a mineral found rarely in nature but sometimes observed among other calcium silicate hydrates artificially formed in cement and concrete submitted to a severe sulfate attack.

At very high pressure, even SiO2 adopts the six-coordinated octahedral geometry in the mineral stishovite, a dense polymorph of silica found in the lower mantle of the Earth and also formed by shock during meteorite impacts.

Silicates with alkali cations and small or chain-like anions, such as sodium ortho- and metasilicate, are fairly soluble in water. They form several solid hydrates when crystallized from solution. Soluble sodium silicates and mixtures thereof, known as waterglass are in fact important industrial and household chemicals. Silicates of non-alkali cations, or with sheet and tridimensional polymeric anions, generally have negligible solubility in water at normal conditions.

Silicate anions are formally the conjugate bases of silicic acids, i.e. compounds with the Si–O–H functional group. For example, orthosilicate can be viewed as the fourfold deprotonated orthosilicic acid Si(OH)4. Silicic acids are generally weak acids. They can be isolated. They exist in aqueous solution as mixtures of condensed and partially protonated anions, in a dynamic equilibrium.[2] The general processes in this equilibrium are hydrolysis/condensation

The equilibrium can shifted towards larger anions by increasing the silicate concentration and/or the acidity of the medium. The orthosilicate anion, for example, is assumed to be the predominant form of silica naturally dissolved in seawater, whose concentration is below 100 parts per million; and also when silica is dissolved in an excess of sodium oxide at pH 12 or more.[2][3] In higher concentrations or low pH, polymeric anions predominate.

In the limit, the silicate anions convert to silicic acids, which condense into a tridimensional network consisting of SiO
4 tetrahedra interconnected by Si–O–Si linkages. A related condensation process is seen in sol-gel processing of tetraethylsilicate.

Silicate anions in solution react with molybdate anions yielding yellow silicomolybdate complexes. In a typical preparation, monomeric orthosilicate was found to react completely in 75 seconds; dimeric pyrosilicate in 10 minutes; and higher oligomers in considerably longer time. In particular, the reaction is not observed with suspensions of colloidal silica.[3]

The nature of soluble silicates is relevant to understanding biomineralization and the synthesis of aluminosilicates, such as the industrially important catalysts called zeolites.[2]