Short description: Organism that consists of only one cell

Although some prokaryotes live in colonies, they are not specialised cells with differing functions. These organisms live together, and each cell must carry out all life processes to survive. In contrast, even the simplest multicellular organisms have cells that depend on each other to survive.

Some organisms are partially unicellular, like Dictyostelium discoideum. Additionally, unicellular organisms can be multinucleate, like Caulerpa, Plasmodium, and Myxogastria.

Primitive protocells were the precursors to today's unicellular organisms. Although the origin of life is largely still a mystery, in the currently prevailing theory, known as the RNA world hypothesis, early RNA molecules would have been the basis for catalyzing organic chemical reactions and self-replication.[4]

Compartmentalization was necessary for chemical reactions to be more likely as well as to differentiate reactions with the external environment. For example, an early RNA replicator ribozyme may have replicated other replicator ribozymes of different RNA sequences if not kept separate.[5] Such hypothetic cells with an RNA genome instead of the usual DNA genome are called 'ribocells' or 'ribocytes'.[4]

When amphiphiles like lipids are placed in water, the hydrophobic tails aggregate to form micelles and vesicles, with the hydrophilic ends facing outwards.[2][5] Primitive cells likely used self-assembling fatty-acid vesicles to separate chemical reactions and the environment.[5] Because of their simplicity and ability to self-assemble in water, it is likely that these simple membranes predated other forms of early biological molecules.[2]

Prokaryotes lack membrane-bound organelles, such as mitochondria or a nucleus.[6] Instead, most prokaryotes have an irregular region that contains DNA, known as the nucleoid.[7] Most prokaryotes have a single, circular chromosome, which is in contrast to eukaryotes, which typically have linear chromosomes.[8] Nutritionally, prokaryotes have the ability to utilize a wide range of organic and inorganic material for use in metabolism, including sulfur, cellulose, ammonia, or nitrite.[9] Prokaryotes are relatively ubiquitous in the environment and some (known as extremophiles) thrive in extreme environments. 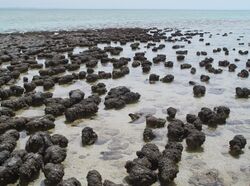 Modern stromatolites in Shark Bay, Western Australia. It can take a century for a stromatolite to grow 5 cm.[10]

Bacteria are one of the world's oldest forms of life, and are found virtually everywhere in nature.[9] Many common bacteria have plasmids, which are short, circular, self-replicating DNA molecules that are separate from the bacterial chromosome.[11] Plasmids can carry genes responsible for novel abilities, of current critical importance being antibiotic resistance.[12] Bacteria predominantly reproduce asexually through a process called binary fission. However, about 80 different species can undergo a sexual process referred to as natural genetic transformation.[13] Transformation is a bacterial process for transferring DNA from one cell to another, and is apparently an adaptation for repairing DNA damage in the recipient cell.[14] In addition, plasmids can be exchanged through the use of a pilus in a process known as conjugation.[12]

Clonal aging occurs naturally in bacteria, and is apparently due to the accumulation of damage that can happen even in the absence of external stressors.[17]

A bottom-dwelling community found deep in the European Arctic.[18]

Hydrothermal vents release heat and hydrogen sulfide, allowing extremophiles to survive using chemolithotrophic growth.[19] Archaea are generally similar in appearance to bacteria, hence their original classification as bacteria, but have significant molecular differences most notably in their membrane structure and ribosomal RNA.[20][21] By sequencing the ribosomal RNA, it was found that the Archaea most likely split from bacteria and were the precursors to modern eukaryotes, and are actually more phylogenetically related to eukaryotes.[21] As their name suggests, Archaea comes from a Greek word archaios, meaning original, ancient, or primitive.[22]

Some archaea inhabit the most biologically inhospitable environments on earth, and this is believed to in some ways mimic the early, harsh conditions that life was likely exposed to. Examples of these Archaean extremophiles are as follows:

Methanogens are a significant subset of archaea and include many extremophiles, but are also ubiquitous in wetland environments as well as the ruminant and hindgut of animals.[27] This process utilizes hydrogen to reduce carbon dioxide into methane, releasing energy into the usable form of adenosine triphosphate.[27] They are the only known organisms capable of producing methane.[28] Under stressful environmental conditions that cause DNA damage, some species of archaea aggregate and transfer DNA between cells.[29] The function of this transfer appears to be to replace damaged DNA sequence information in the recipient cell by undamaged sequence information from the donor cell.[30]

Eukaryotic cells contain membrane bound organelles, such as mitochondria, a nucleus, and chloroplasts. Prokaryotic cells probably transitioned into eukaryotic cells between 2.0 and 1.4 billion years ago.[31] This was an important step in evolution. In contrast to prokaryotes, eukaryotes reproduce by using mitosis and meiosis. Sex appears to be a ubiquitous and ancient, and inherent attribute of eukaryotic life.[32] Meiosis, a true sexual process, allows for efficient recombinational repair of DNA damage [14] and a greater range of genetic diversity by combining the DNA of the parents followed by recombination.[31] Metabolic functions in eukaryotes are more specialized as well by sectioning specific processes into organelles.

The endosymbiotic theory holds that mitochondria and chloroplasts have bacterial origins. Both organelles contain their own sets of DNA and have bacteria-like ribosomes. It is likely that modern mitochondria were once a species similar to Rickettsia, with the parasitic ability to enter a cell.[33] However, if the bacteria were capable of respiration, it would have been beneficial for the larger cell to allow the parasite to live in return for energy and detoxification of oxygen.[33] Chloroplasts probably became symbionts through a similar set of events, and are most likely descendants of cyanobacteria.[34] While not all eukaryotes have mitochondria or chloroplasts, mitochondria are found in most eukaryotes, and chloroplasts are found in all plants and algae. Photosynthesis and respiration are essentially the reverse of one another, and the advent of respiration coupled with photosynthesis enabled much greater access to energy than fermentation alone. 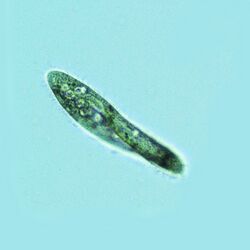 Protozoa are largely defined by their method of locomotion, including flagella, cilia, and pseudopodia.[35] While there has been considerable debate on the classification of protozoa caused by their sheer diversity, in one system there are currently seven phyla recognized under the kingdom Protozoa: Euglenozoa, Amoebozoa, Choanozoa sensu Cavalier-Smith, Loukozoa, Percolozoa, Microsporidia and Sulcozoa.[36][37] Protozoa, like plants and animals, can be considered heterotrophs or autotrophs.[33] Autotrophs like Euglena are capable of producing their energy using photosynthesis, while heterotrophic protozoa consume food by either funneling it through a mouth-like gullet or engulfing it with pseudopods, a form of phagocytosis.[33] While protozoa reproduce mainly asexually, some protozoa are capable of sexual reproduction.[33] Protozoa with sexual capability include the pathogenic species Plasmodium falciparum, Toxoplasma gondii, Trypanosoma brucei, Giardia duodenalis and Leishmania species.[14]

Ciliophora, or ciliates, are a group of protists that utilize cilia for locomotion. Examples include Paramecium, Stentors, and Vorticella.[38] Ciliates are widely abundant in almost all environments where water can be found, and the cilia beat rhythmically in order to propel the organism.[39] Many ciliates have trichocysts, which are spear-like organelles that can be discharged to catch prey, anchor themselves, or for defense.[40][41] Ciliates are also capable of sexual reproduction, and utilize two nuclei unique to ciliates: a macronucleus for normal metabolic control and a separate micronucleus that undergoes meiosis.[40] Examples of such ciliates are Paramecium and Tetrahymena that likely employ meiotic recombination for repairing DNA damage acquired under stressful conditions. 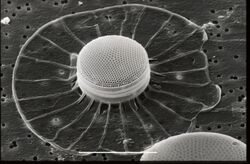 A scanning electron microscope image of a diatom

Unicellular algae are plant-like autotrophs and contain chlorophyll.[44] They include groups that have both multicellular and unicellular species: 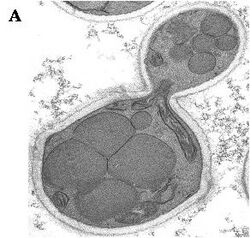 Unicellular fungi include the yeasts. Fungi are found in most habitats, although most are found on land.[50] Yeasts reproduce through mitosis, and many use a process called budding, where most of the cytoplasm is held by the mother cell.[50] Saccharomyces cerevisiae ferments carbohydrates into carbon dioxide and alcohol, and is used in the making of beer and bread.[51] S. cerevisiae is also an important model organism, since it is a eukaryotic organism that's easy to grow. It has been used to research cancer and neurodegenerative diseases as well as to understand the cell cycle.[52][53] Furthermore, research using S. cerevisiae has played a central role in understanding the mechanism of meiotic recombination and the adaptive function of meiosis. Candida spp. are responsible for candidiasis, causing infections of the mouth and/or throat (known as thrush) and vagina (commonly called yeast infection).[54]

Most unicellular organisms are of microscopic size and are thus classified as microorganisms. However, some unicellular protists and bacteria are macroscopic and visible to the naked eye.[55] Examples include: