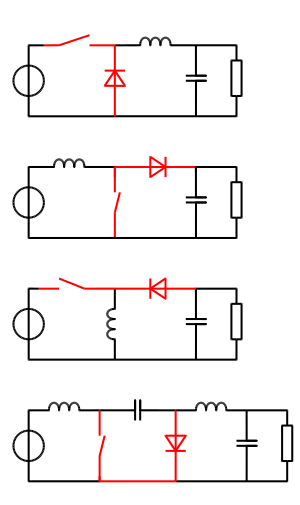 Comparison of non-isolated switching DC-to-DC converter topologies: Buck, Boost, Buck-Boost, Ćuk. The input is left side, the output with load is right side. The switch is typically a MOSFET, IGBT, or BJT transistor.

The Ćuk converter (pronounced chook; sometimes incorrectly spelled Cuk, Čuk or Cúk) is a type of buck-boost converter with zero-ripple current.[1] Ćuk converter can be seen as a combination of boost converter and buck converter, having one switching device and a mutual capacitor, to couple the energy.

Similar to the buck-boost converter with inverting topology, the output voltage of non-isolated Ćuk converter is typically inverted, with lower or higher values with respect to the input voltage. Usually in DC converters, the inductor is used as a main energy-storage component. In ćuk converter, the main energy-storage component is the capacitor. It is named after Slobodan Ćuk of the California Institute of Technology, who first presented the design.[2]

There are variations on the basic Ćuk converter. For example, the coils may share single magnetic core, which drops the output ripple, and adds efficiency. Because the power transfer flows continuously via the capacitor, this type of switcher has minimized EMI radiation. The Ćuk converter allows energy to flow bidirectionally by using a diode and a switch.

A non-isolated Ćuk converter comprises two inductors, two capacitors, a switch (usually a transistor), and a diode. Its schematic can be seen in figure 1. It is an inverting converter, so the output voltage is negative with respect to the input voltage.

The main advantage of this converter is the continuous currents at the input and output of the converter.  The main disadvantage is the high current stress on the switch.[3]

The capacitor C is used to transfer energy. It is connected alternately to the input and to the output of the converter via the commutation of the transistor and the diode (see figures 2 and 3).

The two inductors L1 and L2 are used to convert respectively the input voltage source (Vs) and the output voltage source (Vo) into current sources. At a short time scale, an inductor can be considered as a current source as it maintains a constant current. This conversion is necessary because if the capacitor were connected directly to the voltage source, the current would be limited only by the parasitic resistance, resulting in high energy loss. Charging a capacitor with a current source (the inductor) prevents resistive current limiting and its associated energy loss. 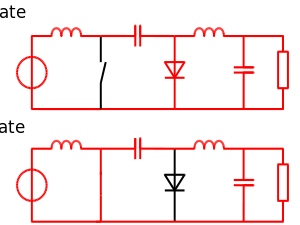 Fig. 2.: The two operating states of a non-isolated Ćuk converter.

In steady state, the energy stored in the inductors has to remain the same at the beginning and at the end of a commutation cycle. The energy in an inductor is given by:

it can be seen that the average value of the inductor voltages over a commutation period have to be zero to satisfy the steady-state requirements.

If we consider that the capacitors C and C2 are large enough for the voltage ripple across them to be negligible, the inductor voltages become:

Fig. 3.: The two operating states of a non-isolated Ćuk converter. In this figure, the diode and the switch are either replaced by a short circuit when they are on or by an open circuit when they are off. It can be seen that when in the off-state, the capacitor C is being charged by the input source through the inductor L1. When in the on-state, the capacitor C transfers the energy to the output capacitor through the inductance L2.

As both average voltage have to be zero to satisfy the steady-state conditions, using the last equation we can write:

So the average voltage across L1 becomes:

Which can be written as:

It can be seen that this relation is the same as that obtained for the buck–boost converter.

Like all DC/DC converters, Ćuk converters rely on the ability of the inductors in the circuit to provide continuous current, in much the same way a capacitor in a rectifier filter provides continuous voltage. If this inductor is too small or below the "critical inductance", then the inductor current slope will be discontinuous where the current goes to zero. This state of operation is usually not studied in much depth as it is generally not used beyond a demonstrating of why the minimum inductance is crucial, although it may occur when maintaining a standby voltage at a much lower current than the converter was designed for.

The minimum inductance is given by:

Where [math]\displaystyle{ f_s }[/math] is the switching frequency. 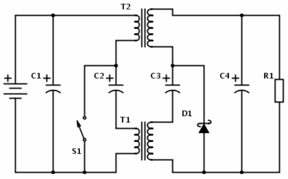 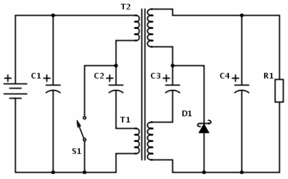 For isolated version of Ćuk converter, an AC transformer and an additional capacitor must be added.[4] Because the isolated Ćuk converter is isolated, the output-voltage polarity can be chosen freely.

As the non-isolated Ćuk converter, the isolated Ćuk converter can have an output voltage magnitude that is either greater than or less than the input voltage magnitude, even with a 1:1 AC transformer. However, the turns ratio can be controlled to reduce device stress on the input side. Additionally, the parasitic elements of the transformer, namely leakage inductance and magnetizing inductance can be used tuned to modify the circuit in to a resonant converter circuit which has much improved efficiency.

A SEPIC converter is able to step-up or step-down the voltage.