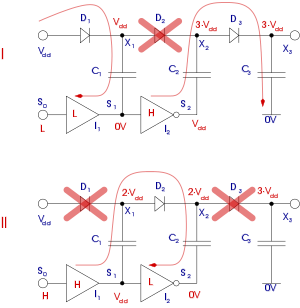 A charge pump is a kind of DC-to-DC converter that uses capacitors for energetic charge storage to raise or lower voltage. Charge-pump circuits are capable of high efficiencies, sometimes as high as 90–95%, while being electrically simple circuits.

Charge pumps use some form of switching device to control the connection of a supply voltage across a load through a capacitor. In a two stage cycle, in the first stage a capacitor is connected across the supply, charging it to that same voltage. In the second stage the circuit is reconfigured so that the capacitor is in series with the supply and the load. This doubles the voltage across the load - the sum of the original supply and the capacitor voltages. The pulsing nature of the higher voltage switched output is often smoothed by the use of an output capacitor.

An external or secondary circuit drives the switching, typically at tens of kilohertz up to several megahertz. The high frequency minimizes the amount of capacitance required, as less charge needs to be stored and dumped in a shorter cycle.

Charge pumps can double voltages, triple voltages, halve voltages, invert voltages, fractionally multiply or scale voltages (such as ×3/2, ×4/3, ×2/3, etc.) and generate arbitrary voltages by quickly alternating between modes, depending on the controller and circuit topology.

They are commonly used in low-power electronics (such as mobile phones) to raise and lower voltages for different parts of the circuitry - minimizing power consumption by controlling supply voltages carefully.

The term charge pump is also commonly used in phase-locked loop (PLL) circuits even though there is no pumping action involved unlike in the circuit discussed above. A PLL charge pump is merely a bipolar switched current source. This means that it can output positive and negative current pulses into the loop filter of the PLL. It cannot produce higher or lower voltages than its power and ground supply levels.