Components can be classified as passive, active, or electromechanic. The strict physics definition treats passive components as ones that cannot supply energy themselves, whereas a battery would be seen as an active component since it truly acts as a source of energy.

However, electronic engineers who perform circuit analysis use a more restrictive definition of passivity. When only concerned with the energy of signals, it is convenient to ignore the so-called DC circuit and pretend that the power supplying components such as transistors or integrated circuits is absent (as if each such component had its own battery built in), though it may in reality be supplied by the DC circuit. Then, the analysis only concerns the AC circuit, an abstraction that ignores DC voltages and currents (and the power associated with them) present in the real-life circuit. This fiction, for instance, lets us view an oscillator as "producing energy" even though in reality the oscillator consumes even more energy from a DC power supply, which we have chosen to ignore. Under that restriction, we define the terms as used in circuit analysis as:

Transistors were considered the invention of the twentieth century that changed electronic circuits forever. A transistor is a semiconductor device used to amplify and switch electronic signals and electrical power.

Conduct electricity easily in one direction, among more specific behaviors.

A vacuum tube is based on current conduction through a vacuum (see Vacuum tube). 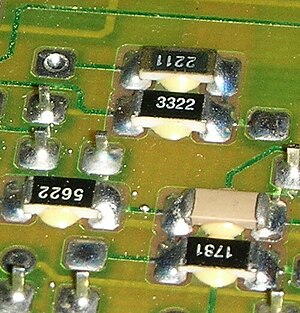 SMD resistors on a backside of a PCB 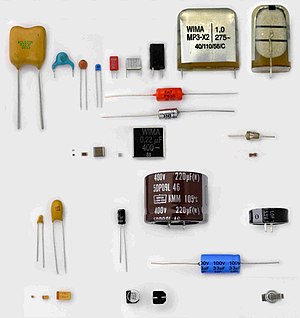 Some different capacitors for electronic equipment

Capacitors store and release electrical charge. They are used for filtering power supply lines, tuning resonant circuits, and for blocking DC voltages while passing AC signals, among numerous other uses.

Electrical components that use magnetism in the storage and release of electrical charge through current:

Electrical components that pass charge in proportion to magnetism or magnetic flux, and have the ability to retain a previous resistive state, hence the name of Memory plus Resistor.

Components that use more than one type of passive component:

A quartz crystal (left) and a crystal oscillator

Passive components that use piezoelectric effect:

Electrical cables with connectors or terminals at their ends

Components that can pass current ("closed") or break the current ("open"):

Passive components that protect circuits from excessive currents or voltages:

On a circuit diagram, electronic devices are represented by conventional symbols. Reference designators are applied to the symbols to identify the components.