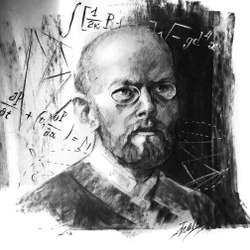 Hilbert's problems are twenty-three problems in mathematics published by German mathematician David Hilbert in 1900. The problems were all unsolved at the time, and several of them were very influential for 20th-century mathematics. Hilbert presented ten of the problems (1, 2, 6, 7, 8, 13, 16, 19, 21, and 22) at the Paris conference of the International Congress of Mathematicians, speaking on August 8 in the Sorbonne. The complete list of 23 problems was published later, most notably in English translation in 1902 by Mary Frances Winston Newson in the Bulletin of the American Mathematical Society.[1]

Nature and influence of the problems

Hilbert's problems ranged greatly in topic and precision. Some of them are propounded precisely enough to enable a clear affirmative or negative answer, like the 3rd problem, which was the first to be solved, or the 8th problem (the Riemann hypothesis). For other problems, such as the 5th, experts have traditionally agreed on a single interpretation, and a solution to the accepted interpretation has been given, but closely related unsolved problems exist. Sometimes Hilbert's statements were not precise enough to specify a particular problem but were suggestive enough so that certain problems of more contemporary origin seem to apply; for example, most modern number theorists would probably see the 9th problem as referring to the conjectural Langlands correspondence on representations of the absolute Galois group of a number field.[citation needed] Still other problems, such as the 11th and the 16th, concern what are now flourishing mathematical subdisciplines, like the theories of quadratic forms and real algebraic curves.

There are two problems that are not only unresolved but may in fact be unresolvable by modern standards. The 6th problem concerns the axiomatization of physics, a goal that twentieth-century developments of physics (including its recognition as a discipline independent from mathematics) seem to render both more remote and less important than in Hilbert's time. Also, the 4th problem concerns the foundations of geometry, in a manner that is now generally judged to be too vague to enable a definitive answer.

The other twenty-one problems have all received significant attention, and late into the twentieth century work on these problems was still considered to be of the greatest importance. Paul Cohen received the Fields Medal during 1966 for his work on the first problem, and the negative solution of the tenth problem during 1970 by Yuri Matiyasevich (completing work of Martin Davis, Hilary Putnam, and Julia Robinson) generated similar acclaim. Aspects of these problems are still of great interest today.

Following Gottlob Frege and Bertrand Russell, Hilbert sought to define mathematics logically using the method of formal systems, i.e., finitistic proofs from an agreed-upon set of axioms.[2] One of the main goals of Hilbert's program was a finitistic proof of the consistency of the axioms of arithmetic: that is his second problem.[lower-alpha 1]

However, Gödel's second incompleteness theorem gives a precise sense in which such a finitistic proof of the consistency of arithmetic is provably impossible. Hilbert lived for 12 years after Kurt Gödel published his theorem, but does not seem to have written any formal response to Gödel's work.[lower-alpha 2][lower-alpha 3]

Hilbert's tenth problem does not ask whether there exists an algorithm for deciding the solvability of Diophantine equations, but rather asks for the construction of such an algorithm: "to devise a process according to which it can be determined in a finite number of operations whether the equation is solvable in rational integers." That this problem was solved by showing that there cannot be any such algorithm contradicted Hilbert's philosophy of mathematics.

In discussing his opinion that every mathematical problem should have a solution, Hilbert allows for the possibility that the solution could be a proof that the original problem is impossible.[lower-alpha 4] He stated that the point is to know one way or the other what the solution is, and he believed that we always can know this, that in mathematics there is not any "ignorabimus" (statement whose truth can never be known).[lower-alpha 5] It seems unclear whether he would have regarded the solution of the tenth problem as an instance of ignorabimus: what is proved not to exist is not the integer solution, but (in a certain sense) the ability to discern in a specific way whether a solution exists.

On the other hand, the status of the first and second problems is even more complicated: there is not any clear mathematical consensus as to whether the results of Gödel (in the case of the second problem), or Gödel and Cohen (in the case of the first problem) give definitive negative solutions or not, since these solutions apply to a certain formalization of the problems, which is not necessarily the only possible one.[lower-alpha 6]

Hilbert originally included 24 problems on his list, but decided against including one of them in the published list. The "24th problem" (in proof theory, on a criterion for simplicity and general methods) was rediscovered in Hilbert's original manuscript notes by German historian Rüdiger Thiele [de] in 2000.[5]

Since 1900, mathematicians and mathematical organizations have announced problem lists, but, with few exceptions, these collections have not had nearly as much influence nor generated as much work as Hilbert's problems.

Paul Erdős posed hundreds, if not thousands, of mathematical problems, many of them profound. Erdős often offered monetary rewards; the size of the reward depended on the perceived difficulty of the problem.

The end of the millennium, being also the centennial of Hilbert's announcement of his problems, was a natural occasion to propose "a new set of Hilbert problems." Several mathematicians accepted the challenge, notably Fields Medalist Steve Smale, who responded to a request of Vladimir Arnold by proposing a list of 18 problems. Smale's problems have thus far not received much attention from the media, and it is unclear how much serious attention they are getting from the mathematical community.

At least in the mainstream media, the de facto 21st century analogue of Hilbert's problems is the list of seven Millennium Prize Problems chosen during 2000 by the Clay Mathematics Institute. Unlike the Hilbert problems, where the primary award was the admiration of Hilbert in particular and mathematicians in general, each prize problem includes a million dollar bounty. As with the Hilbert problems, one of the prize problems (the Poincaré conjecture) was solved relatively soon after the problems were announced.

The Riemann hypothesis is noteworthy for its appearance on the list of Hilbert problems, Smale's list, the list of Millennium Prize Problems, and even in the Weil conjectures, in its geometric guise. Notwithstanding some famous recent assaults from major mathematicians of our day, many experts[who?] believe that the Riemann hypothesis will be included in problem lists for many centuries. Hilbert himself declared: "If I were to awaken after having slept for a thousand years, my first question would be: Has the Riemann hypothesis been proven?"[6]

In 2008, DARPA announced its own list of 23 problems that it hoped could cause major mathematical breakthroughs, "thereby strengthening the scientific and technological capabilities of DoD."[7][8]

That leaves 8 (the Riemann hypothesis), 12, 13 and 16[lower-alpha 7] unresolved, and 4 and 23 as too vague to ever be described as solved. The withdrawn 24 would also be in this class. Number 6 is deferred as a problem in physics rather than in mathematics.

Hilbert's twenty-three problems are (for details on the solutions and references, see the detailed articles that are linked to in the first column):