Short description: An arrangement of non-overlapping spheres within a containing space

Sphere packing finds practical application in the stacking of cannonballs.

A typical sphere packing problem is to find an arrangement in which the spheres fill as much of the space as possible. The proportion of space filled by the spheres is called the packing density of the arrangement. As the local density of a packing in an infinite space can vary depending on the volume over which it is measured, the problem is usually to maximise the average or asymptotic density, measured over a large enough volume.

For equal spheres in three dimensions, the densest packing uses approximately 74% of the volume. A random packing of equal spheres generally has a density around 63.5%.[1]

A lattice arrangement (commonly called a regular arrangement) is one in which the centers of the spheres form a very symmetric pattern which needs only n vectors to be uniquely defined (in n-dimensional Euclidean space). Lattice arrangements are periodic. Arrangements in which the spheres do not form a lattice (often referred to as irregular) can still be periodic, but also aperiodic (properly speaking non-periodic) or random. Because of their high degree of symmetry, lattice packings are easier to classify than non-lattice ones. Periodic lattices always have well-defined densities.

HCP lattice (left) and the FCC lattice (right) are the two most common highest density arrangements.

Two ways to stack three planes made of spheres

In three-dimensional Euclidean space, the densest packing of equal spheres is achieved by a family of structures called close-packed structures. One method for generating such a structure is as follows. Consider a plane with a compact arrangement of spheres on it. Call it A. For any three neighbouring spheres, a fourth sphere can be placed on top in the hollow between the three bottom spheres. If we do this for half of the holes in a second plane above the first, we create a new compact layer. There are two possible choices for doing this, call them B and C. Suppose that we chose B. Then one half of the hollows of B lies above the centers of the balls in A and one half lies above the hollows of A which were not used for B. Thus the balls of a third layer can be placed either directly above the balls of the first one, yielding a layer of type A, or above the holes of the first layer which were not occupied by the second layer, yielding a layer of type C. Combining layers of types A, B, and C produces various close-packed structures.

Two simple arrangements within the close-packed family correspond to regular lattices. One is called cubic close packing (or face-centred cubic, "FCC")—where the layers are alternated in the ABCABC... sequence. The other is called hexagonal close packing ("HCP")—where the layers are alternated in the ABAB... sequence. But many layer stacking sequences are possible (ABAC, ABCBA, ABCBAC, etc.), and still generate a close-packed structure. In all of these arrangements each sphere touches 12 neighboring spheres,[2] and the average density is

Carl Friedrich Gauss proved in 1831 that these packings have the highest density amongst all possible lattice packings.[3]

In 1611 Johannes Kepler conjectured that this is the maximum possible density amongst both regular and irregular arrangements—this became known as the Kepler conjecture. In 1998, Thomas Callister Hales, following the approach suggested by László Fejes Tóth in 1953, announced a proof of the Kepler conjecture. Hales' proof is a proof by exhaustion involving checking of many individual cases using complex computer calculations. Referees said that they were "99% certain" of the correctness of Hales' proof. On 10 August 2014, Hales announced the completion of a formal proof using automated proof checking, removing any doubt.[4]

Jammed packings with a low density

Packings where all spheres are constrained by their neighbours to stay in one location are called rigid or jammed. The strictly jammed sphere packing with the lowest density is a diluted ("tunneled") fcc crystal with a density of only 0.49365.[6]

If we attempt to build a densely packed collection of spheres, we will be tempted to always place the next sphere in a hollow between three packed spheres. If five spheres are assembled in this way, they will be consistent with one of the regularly packed arrangements described above. However, the sixth sphere placed in this way will render the structure inconsistent with any regular arrangement. This results in the possibility of a random close packing of spheres which is stable against compression.[7] Vibration of a random loose packing can result in the arrangement of spherical particles into regular packings, a process known as granular crystallisation. Such processes depend on the geometry of the container holding the spherical grains.[2]

When spheres are randomly added to a container and then compressed, they will generally form what is known as an "irregular" or "jammed" packing configuration when they can be compressed no more. This irregular packing will generally have a density of about 64%. Recent research predicts analytically that it cannot exceed a density limit of 63.4%[8] This situation is unlike the case of one or two dimensions, where compressing a collection of 1-dimensional or 2-dimensional spheres (that is, line segments or circles) will yield a regular packing.

In 2016, Maryna Viazovska announced a proof that the E8 lattice provides the optimal packing (regardless of regularity) in eight-dimensional space,[12] and soon afterwards she and a group of collaborators announced a similar proof that the Leech lattice is optimal in 24 dimensions.[13] This result built on and improved previous methods which showed that these two lattices are very close to optimal.[14] The new proofs involve using the Laplace transform of a carefully chosen modular function to construct a radially symmetric function f such that f and its Fourier transform f̂ both equal one at the origin, and both vanish at all other points of the optimal lattice, with f negative outside the central sphere of the packing and f̂ positive. Then, the Poisson summation formula for f is used to compare the density of the optimal lattice with that of any other packing.[15] Before the proof had been formally refereed and published, mathematician Peter Sarnak called the proof "stunningly simple" and wrote that "You just start reading the paper and you know this is correct."[16]

Another line of research in high dimensions is trying to find asymptotic bounds for the density of the densest packings. As of 2017, it is known that for large n, the densest lattice in dimension n has density between cn ⋅ 2−n (for some constant c) and 2−0.599n.[17] Conjectural bounds lie in between.[18] 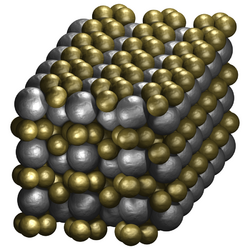 Many problems in the chemical and physical sciences can be related to packing problems where more than one size of sphere is available. Here there is a choice between separating the spheres into regions of close-packed equal spheres, or combining the multiple sizes of spheres into a compound or interstitial packing. When many sizes of spheres (or a distribution) are available, the problem quickly becomes intractable, but some studies of binary hard spheres (two sizes) are available.

When the second sphere is much smaller than the first, it is possible to arrange the large spheres in a close-packed arrangement, and then arrange the small spheres within the octahedral and tetrahedral gaps. The density of this interstitial packing depends sensitively on the radius ratio, but in the limit of extreme size ratios, the smaller spheres can fill the gaps with the same density as the larger spheres filled space.[20] Even if the large spheres are not in a close-packed arrangement, it is always possible to insert some smaller spheres of up to 0.29099 of the radius of the larger sphere.[21]

When the smaller sphere has a radius greater than 0.41421 of the radius of the larger sphere, it is no longer possible to fit into even the octahedral holes of the close-packed structure. Thus, beyond this point, either the host structure must expand to accommodate the interstitials (which compromises the overall density), or rearrange into a more complex crystalline compound structure. Structures are known which exceed the close packing density for radius ratios up to 0.659786.[19][22]

Upper bounds for the density that can be obtained in such binary packings have also been obtained.[23]

In many chemical situations such as ionic crystals, the stoichiometry is constrained by the charges of the constituent ions. This additional constraint on the packing, together with the need to minimize the Coulomb energy of interacting charges leads to a diversity of optimal packing arrangements.

Although the concept of circles and spheres can be extended to hyperbolic space, finding the densest packing becomes much more difficult. In a hyperbolic space there is no limit to the number of spheres that can surround another sphere (for example, Ford circles can be thought of as an arrangement of identical hyperbolic circles in which each circle is surrounded by an infinite number of other circles). The concept of average density also becomes much more difficult to define accurately. The densest packings in any hyperbolic space are almost always irregular.[24]

Despite this difficulty, K. Böröczky gives a universal upper bound for the density of sphere packings of hyperbolic n-space where n ≥ 2.[25] In three dimensions the Böröczky bound is approximately 85.327613%, and is realized by the horosphere packing of the order-6 tetrahedral honeycomb with Schläfli symbol {3,3,6}.[26] In addition to this configuration at least three other horosphere packings are known to exist in hyperbolic 3-space that realize the density upper bound.[27]

The problem of finding the arrangement of n identical spheres that maximizes the number of contact points between the spheres is known as the "sticky-sphere problem". The maximum is known for n ≤ 11, and only conjectural values are known for larger n.[29]

For further details on these connections, see the book Sphere Packings, Lattices and Groups by Conway and Sloane.[30]

A non-technical overview of packing in hyperbolic space.