Short description: Symptoms that can occur following a reduction in alcohol use after a period of excessive use

Alcohol withdrawal syndrome (AWS) is a set of symptoms that can occur following a reduction in alcohol use after a period of excessive use.[1] Symptoms typically include anxiety, shakiness, sweating, vomiting, fast heart rate, and a mild fever.[1] More severe symptoms may include seizures, hallucinations, and delirium tremens (DTs).[1] Symptoms typically begin around six hours following the last drink, are worst at 24 to 72 hours, and improve by seven days.[2][3]

Alcohol withdrawal may occur in those who are alcohol dependent.[1] This may occur following a planned or unplanned decrease in alcohol intake.[1] The underlying mechanism involves a decreased responsiveness of GABA receptors in the brain.[3] The withdrawal process is typically followed using the Clinical Institute Withdrawal Assessment for Alcohol scale (CIWA-Ar).[3]

The typical treatment of alcohol withdrawal is with benzodiazepines such as chlordiazepoxide or diazepam.[2] Often the amounts given are based on a person's symptoms.[2] Thiamine is recommended routinely.[2] Electrolyte problems and low blood sugar should also be treated.[2] Early treatment improves outcomes.[2]

In the Western world about 15% of people have problems with alcoholism at some point in time.[3] Alcohol depresses the central nervous system, slowing cerebral messaging and altering the way signals are sent and received. Progressively larger amounts of alcohol are needed to achieve the same physical and emotional results. The drinker eventually must consume alcohol just to avoid the physical cravings and withdrawal symptoms.[4] About half of people with alcoholism will develop withdrawal symptoms upon reducing their use, with four percent developing severe symptoms.[3] Among those with severe symptoms up to 15% die.[2] Symptoms of alcohol withdrawal have been described at least as early as 400 BC by Hippocrates.[5][6] It is not believed to have become a widespread problem until the 1700s.[6]

Signs and symptoms of alcohol withdrawal occur primarily in the central nervous system. The severity of withdrawal can vary from mild symptoms such as insomnia, trembling, and anxiety to severe and life-threatening symptoms such as alcoholic hallucinosis, delirium tremens, and autonomic instability.[7][8]

Withdrawal usually begins 6 to 24 hours after the last drink.[9] It can last for up to one week.[10] To be classified as alcohol withdrawal syndrome, patients must exhibit at least two of the following symptoms: increased hand tremor, insomnia, nausea or vomiting, transient hallucinations (auditory, visual or tactile), psychomotor agitation, anxiety, generalized tonic–clonic seizures, and autonomic instability.[11]

The severity of symptoms is dictated by a number of factors, the most important of which are degree of alcohol intake, length of time the individual has been using alcohol, and previous history of alcohol withdrawal.[11][12] Symptoms are also grouped together and classified: 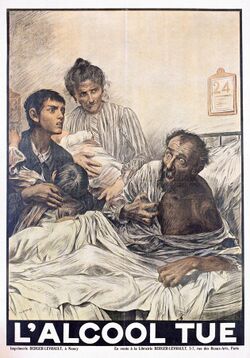 Six to 12 hours after the ingestion of the last drink, withdrawal symptoms such as shaking, headache, sweating, anxiety, nausea or vomiting may occur.[14] Twelve to 24 hours after cessation, the condition may progress to such major symptoms as confusion, hallucinations[14] (with awareness of reality), while less severe symptoms may persist and develop including tremor, agitation, hyperactivity and insomnia.[12]

At 12 to 48 hours following the last ethanol ingestion, the possibility of generalized tonic–clonic seizures should be anticipated, occurring in 3-5% of cases.[12] Meanwhile, none of the earlier withdrawal symptoms will typically have abated. Seizures carry the risk of major complications and death for the alcoholic.[15][12]

Although the person's condition usually begins to improve after 48 hours, withdrawal symptoms sometimes continue to increase in severity and advance to the most severe stage of withdrawal, delirium tremens. This occurs in 5 to 20% of patients experiencing detoxification and one third of untreated cases,[13][12] which is characterized by hallucinations that are indistinguishable from reality, severe confusion, seizures, high blood pressure, and fever that can persist anywhere from 4 to 12 days.[14]

A protracted alcohol withdrawal syndrome occurs in many alcoholics when withdrawal symptoms continue beyond the acute withdrawal stage but usually at a subacute level of intensity and gradually decreasing with severity over time. This syndrome is sometimes referred to as the post-acute-withdrawal syndrome. Some withdrawal symptoms can linger for at least a year after discontinuation of alcohol. Symptoms can include a craving for alcohol, inability to feel pleasure from normally pleasurable things (known as anhedonia), clouding of sensorium, disorientation, nausea and vomiting or headache.[16]

Insomnia is a common protracted withdrawal symptom that persists after the acute withdrawal phase of alcohol. Insomnia has also been found to influence relapse rate. Studies have found that magnesium or trazodone can help treat the persisting withdrawal symptom of insomnia in recovering alcoholics. Insomnia can be difficult to treat in these individuals because many of the traditional sleep aids (e.g., benzodiazepine receptor agonists and barbiturate receptor agonists) work via a GABAA receptor mechanism and are cross-tolerant with alcohol. However, trazodone is not cross-tolerant with alcohol.[17][18][19] The acute phase of the alcohol withdrawal syndrome can occasionally be protracted. Protracted delirium tremens has been reported in the medical literature as a possible but unusual feature of alcohol withdrawal.[20]

Chronic use of alcohol leads to changes in brain chemistry especially in the GABAergic system. Various adaptations occur such as changes in gene expression and down regulation of GABAA receptors. During acute alcohol withdrawal, changes also occur such as upregulation of alpha4 containing GABAA receptors and downregulation of alpha1 and alpha3 containing GABAA receptors. Neurochemical changes occurring during alcohol withdrawal can be minimized with drugs which are used for acute detoxification. With abstinence from alcohol and cross-tolerant drugs these changes in neurochemistry may gradually return towards normal.[21][22] Adaptations to the NMDA system also occur as a result of repeated alcohol intoxication and are involved in the hyper-excitability of the central nervous system during the alcohol withdrawal syndrome. Homocysteine levels, which are elevated during chronic drinking, increase even further during the withdrawal state, and may result in excitotoxicity.[23] Alterations in ECG (in particular an increase in QT interval) and EEG abnormalities (including abnormal quantified EEG) may occur during early withdrawal.[23] Dysfunction of the hypothalamic–pituitary–adrenal axis and increased release of corticotropin-releasing hormone occur during both acute as well as protracted abstinence from alcohol and contribute to both acute and protracted withdrawal symptoms. Anhedonia/dysphoria symptoms, which can persist as part of a protracted withdrawal, may be due to dopamine underactivity.[24]

Kindling can cause complications and may increase the risk of relapse, alcohol-related brain damage and cognitive deficits. Chronic alcohol misuse and kindling via multiple alcohol withdrawals may lead to permanent alterations in the GABAA receptors.[25] The mechanism behind kindling is sensitization of some neuronal systems and desensitization of other neuronal systems which leads to increasingly gross neurochemical imbalances. This in turn leads to more profound withdrawal symptoms including anxiety, convulsions and neurotoxicity.[26]

Binge drinking is associated with increased impulsivity, impairments in spatial working memory and impaired emotional learning. These adverse effects are believed to be due to the neurotoxic effects of repeated withdrawal from alcohol on aberrant neuronal plasticity and cortical damage. Repeated periods of acute intoxication followed by acute detoxification has profound effects on the brain and is associated with an increased risk of seizures as well as cognitive deficits. The effects on the brain are similar to those seen in alcoholics who have detoxified repeatedly but not as severe as in alcoholics who have no history of prior detox. Thus, the acute withdrawal syndrome appears to be the most important factor in causing damage or impairment to brain function. The brain regions most sensitive to harm from binge drinking are the amygdala and prefrontal cortex.[27]

Many hospitals use the Clinical Institute Withdrawal Assessment for Alcohol (CIWA) protocol in order to assess the level of withdrawal present and therefore the amount of medication needed.[11] When overuse of alcohol is suspected but drinking history is unclear, testing for elevated values of carbohydrate-deficient transferrin or gammaglutamyl transferase can help make the diagnosis of alcohol overuse and dependence more clear. The CIWA has also been shortened (now called the CIWA-Ar), while retaining its validity and reliability, to help assess patients more efficiently due to the life-threatening nature of alcohol withdrawal.[29]

Other conditions that may present similarly include benzodiazepine withdrawal syndrome (a condition also mainly caused by GABAA receptor adaptation).

Benzodiazepines are effective for the management of symptoms as well as the prevention of seizures.[30] Certain vitamins are also an important part of the management of alcohol withdrawal syndrome. In those with severe symptoms inpatient care is often required.[9] In those with lesser symptoms treatment at home may be possible with daily visits with a health care provider.[9]

The primary debate between use of long-acting benzodiazepines and short-acting is that of ease of use. Longer-acting drugs, such as diazepam, can be administered less frequently. However, evidence does exist that "symptom-triggered regimens" such as those used when treating with lorazepam, are as safe and effective, but have decreased treatment duration and medication quantity used.[10]

Alcoholics are often deficient in various nutrients, which can cause severe complications during alcohol withdrawal, such as the development of Wernicke syndrome. To help to prevent Wernicke syndrome, these individuals should be administered a multivitamin preparation with sufficient quantities of thiamine and folic acid. During alcohol withdrawal, the prophylactic administration of thiamine, folic acid, and pyridoxine intravenously is recommended before starting any carbohydrate-containing fluids or food. These vitamins are often combined into a banana bag for intravenous administration.[36]

There are three medications used to help prevent a return to drinking: naltrexone, acamprosate, and disulfiram. They are used after withdrawal has occurred.[41]

Clonidine may be used in combination with benzodiazepines to help some of the symptoms.[11] No conclusions can be drawn concerning the efficacy or safety of baclofen for alcohol withdrawal syndrome due to the insufficiency and low quality of the evidence.[42]

Antipsychotics, such as haloperidol, are sometimes used in addition to benzodiazepines to control agitation or psychosis.[11] Antipsychotics may potentially worsen alcohol withdrawal as they lower the seizure threshold. Clozapine, olanzapine, or low-potency phenothiazines (such as chlorpromazine) are particularly risky; if used, extreme caution is required.[43]

While intravenous ethanol could theoretically be used, evidence to support this use, at least in those who are very sick, is insufficient.[44]

Continued use of benzodiazepines may impair recovery from psychomotor and cognitive impairments from alcohol.[47] Cigarette smoking may slow down or interfere with recovery of brain pathways in recovering alcoholics.[48]