In cryptography, a message authentication code (MAC), sometimes known as a tag, is a short piece of information used for authenticating a message. In other words, to confirm that the message came from the stated sender (its authenticity) and has not been changed. The MAC value protects a message's data integrity, as well as its authenticity, by allowing verifiers (who also possess the secret key) to detect any changes to the message content.

The term message integrity code (MIC) is frequently substituted for the term MAC, especially in communications[1] to distinguish it from the use of the latter as media access control address (MAC address). However, some authors[2] use MIC to refer to a message digest, which aims only to uniquely but opaquely identify a single message. RFC 4949 recommends avoiding the term message integrity code (MIC), and instead using checksum, error detection code, hash, keyed hash, message authentication code, or protected checksum.

A secure message authentication code must resist attempts by an adversary to forge tags, for arbitrary, select, or all messages, including under conditions of known- or chosen-message. It should be computationally infeasible to compute a valid tag of the given message without knowledge of the key, even if for the worst case, we assume the adversary knows the tag of any message but the one in question.[3]

S and V must satisfy the following:

A MAC is unforgeable if for every efficient adversary A

where AS(k, · ) denotes that A has access to the oracle S(k, · ), and Query(AS(k, · ), 1n) denotes the set of the queries on S made by A, which knows n. Clearly we require that any adversary cannot directly query the string x on S, since otherwise a valid tag can be easily obtained by that adversary.[6]

While MAC functions are similar to cryptographic hash functions, they possess different security requirements. To be considered secure, a MAC function must resist existential forgery under chosen-message attacks. This means that even if an attacker has access to an oracle which possesses the secret key and generates MACs for messages of the attacker's choosing, the attacker cannot guess the MAC for other messages (which were not used to query the oracle) without performing infeasible amounts of computation.

MACs differ from digital signatures as MAC values are both generated and verified using the same secret key. This implies that the sender and receiver of a message must agree on the same key before initiating communications, as is the case with symmetric encryption. For the same reason, MACs do not provide the property of non-repudiation offered by signatures specifically in the case of a network-wide shared secret key: any user who can verify a MAC is also capable of generating MACs for other messages. In contrast, a digital signature is generated using the private key of a key pair, which is public-key cryptography.[4] Since this private key is only accessible to its holder, a digital signature proves that a document was signed by none other than that holder. Thus, digital signatures do offer non-repudiation. However, non-repudiation can be provided by systems that securely bind key usage information to the MAC key; the same key is in the possession of two people, but one has a copy of the key that can be used for MAC generation while the other has a copy of the key in a hardware security module that only permits MAC verification. This is commonly done in the finance industry.

Intrinsically keyed hash algorithms such as SipHash are also by definition MACs; they can be even faster than universal-hashing based MACs.[8]

Additionally, the MAC algorithm can deliberately combine two or more cryptographic primitives, so as to maintain protection even if one of them is later found to be vulnerable. For instance, in Transport Layer Security (TLS), the input data is split in halves that are each processed with a different hashing primitive (SHA-1 and SHA-2) then XORed together to output the MAC.

Universal hashing and in particular pairwise independent hash functions provide a secure message authentication code as long as the key is used at most once. This can be seen as the one-time pad for authentication.[9]

The simplest such pairwise independent hash function is defined by the random key, key = (a, b), and the MAC tag for a message m is computed as tag = (am + b) mod p, where p is prime.

Message authentication codes and data origin authentication have been also discussed in the framework of quantum cryptography. By contrast to other cryptographic tasks, such as key distribution, for a rather broad class of quantum MACs it has been shown that quantum resources do not offer any advantage over unconditionally secure one-time classical MACs.[10]

Various standards exist that define MAC algorithms. These include:

An example of MAC use 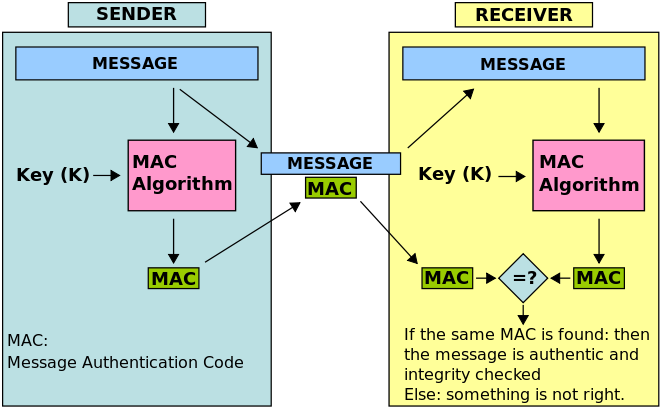 However, to allow the receiver to be able to detect replay attacks, the message itself must contain data that assures that this same message can only be sent once (e.g. time stamp, sequence number or use of a one-time MAC). Otherwise an attacker could – without even understanding its content – record this message and play it back at a later time, producing the same result as the original sender.