EAX mode (encrypt-then-authenticate-then-translate[1]) is a mode of operation for cryptographic block ciphers. It is an Authenticated Encryption with Associated Data (AEAD) algorithm designed to simultaneously provide both authentication and privacy of the message (authenticated encryption) with a two-pass scheme, one pass for achieving privacy and one for authenticity for each block.

EAX mode was submitted on October 3, 2003 to the attention of NIST in order to replace CCM as standard AEAD mode of operation, since CCM mode lacks some desirable attributes of EAX and is more complex. 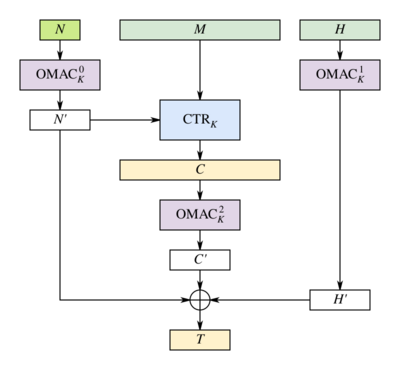 EAX is a flexible nonce-using two-pass AEAD scheme with no restrictions on block cipher primitive to be used, nor on block size, and supports arbitrary-length messages. Authentication tag length is arbitrarily sizeable up to the used cipher's block size.

The block cipher primitive is used in CTR mode for encryption and as OMAC for authentication over each block through the EAX composition method, that may be seen as a particular case of a more general algorithm called EAX2 and described in The EAX Mode of Operation[2]

The reference implementation in the aforementioned paper uses AES in CTR mode for encryption combined with AES OMAC for authentication.

Being a two-pass scheme, EAX mode is slower than a well designed one-pass scheme based on the same primitives.

The authors of EAX mode, Mihir Bellare, Phillip Rogaway, and David Wagner placed the work under public domain and have stated that they were unaware of any patents covering this technology. Thus, EAX mode of operation is believed to be free and unencumbered for any use.

A modification of the EAX mode, so called EAX′ or EAXprime, is used in the ANSI C12.22 standard for transport of meter-based data over a network. In 2012 Kazuhiko Minematsu, Stefan Lucks, Hiraku Morita and Tetsu Iwata published a paper that proves the security of the mode with messages longer than the key, but demonstrates a trivial attack against short messages using this mode.[3] It is not possible to create vulnerable short messages compliant with the ANSI C12.22 standard, but in other contexts in which such short messages are possible, EAXprime cannot be securely used.[4]