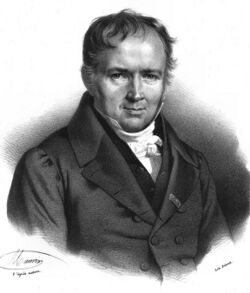 Poisson's equation is an elliptic partial differential equation of broad utility in theoretical physics. For example, the solution to Poisson's equation is the potential field caused by a given electric charge or mass density distribution; with the potential field known, one can then calculate electrostatic or gravitational (force) field. It is a generalization of Laplace's equation, which is also frequently seen in physics. The equation is named after French mathematician and physicist Siméon Denis Poisson.[1][2]

Statement of the equation

Poisson's equation may be solved using a Green's function: [math]\displaystyle{ \varphi(\mathbf{r}) = - \iiint \frac{f(\mathbf{r}')}{4\pi |\mathbf{r} - \mathbf{r}'|}\, \mathrm{d}^3\! r', }[/math] where the integral is over all of space. A general exposition of the Green's function for Poisson's equation is given in the article on the screened Poisson equation. There are various methods for numerical solution, such as the relaxation method, an iterative algorithm.

In the case of a gravitational field g due to an attracting massive object of density ρ, Gauss's law for gravity in differential form can be used to obtain the corresponding Poisson equation for gravity, [math]\displaystyle{ \nabla\cdot\mathbf{g} = -4\pi G\rho ~. }[/math]

Since the gravitational field is conservative (and irrotational), it can be expressed in terms of a scalar potential Φ, [math]\displaystyle{ \mathbf{g} = -\nabla \phi ~. }[/math]

If the mass density is zero, Poisson's equation reduces to Laplace's equation. The corresponding Green's function can be used to calculate the potential at distance r from a central point mass m (i.e., the fundamental solution). In three dimensions the potential is [math]\displaystyle{ \phi(r) = \dfrac {-G m}{r}. }[/math] which is equivalent to Newton's law of universal gravitation.

One of the cornerstones of electrostatics is setting up and solving problems described by the Poisson equation. Solving the Poisson equation amounts to finding the electric potential φ for a given charge distribution [math]\displaystyle{ \rho_f }[/math].

The mathematical details behind Poisson's equation in electrostatics are as follows (SI units are used rather than Gaussian units, which are also frequently used in electromagnetism).

Assuming the medium is linear, isotropic, and homogeneous (see polarization density), we have the constitutive equation, [math]\displaystyle{ \mathbf{D} = \varepsilon \mathbf{E} }[/math] where ε is the permittivity of the medium and E is the electric field.

Using Green's Function, the potential at distance r from a central point charge Q (i.e., the Fundamental Solution) is: [math]\displaystyle{ \varphi(r) = \frac {Q}{4 \pi \varepsilon r}. }[/math] which is Coulomb's law of electrostatics. (For historic reasons, and unlike gravity's model above, the [math]\displaystyle{ 4 \pi }[/math] factor appears here and not in Gauss's law.)

The above discussion assumes that the magnetic field is not varying in time. The same Poisson equation arises even if it does vary in time, as long as the Coulomb gauge is used. In this more general context, computing φ is no longer sufficient to calculate E, since E also depends on the magnetic vector potential A, which must be independently computed. See Maxwell's equation in potential formulation for more on φ and A in Maxwell's equations and how Poisson's equation is obtained in this case.

Potential of a Gaussian charge density

This solution can be checked explicitly by evaluating ∇2φ.

Note that, for r much greater than σ, the erf function approaches unity and the potential φ(r) approaches the point charge potential [math]\displaystyle{ \varphi \approx \frac{1}{4 \pi \varepsilon} \frac{Q}{r} , }[/math] as one would expect. Furthermore, the error function approaches 1 extremely quickly as its argument increases; in practice for r > 3σ the relative error is smaller than one part in a thousand.

Surface reconstruction is an inverse problem. The goal is to digitally reconstruct a smooth surface based on a large number of points pi (a point cloud) where each point also carries an estimate of the local surface normal ni.[3] Poisson's equation can be utilized to solve this problem with a technique called Poisson surface reconstruction.[4]

In order to effectively apply Poisson's equation to the problem of surface reconstruction, it is necessary to find a good discretization of the vector field V. The basic approach is to bound the data with a finite difference grid. For a function valued at the nodes of such a grid, its gradient can be represented as valued on staggered grids, i.e. on grids whose nodes lie in between the nodes of the original grid. It is convenient to define three staggered grids, each shifted in one and only one direction corresponding to the components of the normal data. On each staggered grid we perform [trilinear interpolation] on the set of points. The interpolation weights are then used to distribute the magnitude of the associated component of ni onto the nodes of the particular staggered grid cell containing pi. Kazhdan and coauthors give a more accurate method of discretization using an adaptive finite difference grid, i.e. the cells of the grid are smaller (the grid is more finely divided) where there are more data points.[4] They suggest implementing this technique with an adaptive octree.