Unsolved:History of the creation–evolution controversy

Rejection of evolution by religious groups, sometimes called creation–evolution controversy, has a long history.[1] In response to theories developed by scientists, some religious individuals and organizations questioned the legitimacy of scientific ideas that contradicted the literal interpretation of the creation account in Genesis. Interpretation of the Judeo-Christian Bible had long been the prerogative of an orthodox priesthood able to understand Latin who traditionally held that Genesis was not meant to be read literally and taught it as an allegory.[2] With the advent of the printing press, the translation of the Bible into other languages, and wider literacy, sundry and more literal understandings of scripture flourished.[3] This allowed some religious persons and groups to challenge scientists who supported evolution, such as biologists Thomas Henry Huxley and Ernst Haeckel.[4]

Creation–evolution controversy in the age of Darwin

Although the history of evolutionary thought dates back to Empedocles and other Greek philosophers in Europe (5th century BCE), and Taoism in Asia, and the history of evolutionary thought in Christian theology dates back to Augustine of Hippo (4th century) and Thomas Aquinas (13th century), the current creation–evolution controversy originated in Europe and North America in the late 18th century. Discoveries in geology led to various theories of an ancient earth, and fossils showing past extinctions prompted early ideas of evolution, which were particularly controversial in England, where both the natural world and the hierarchical social order were thought to be fixed by God's will. As the terrors of the French Revolution developed into the Napoleonic Wars, followed by economic depression threatening revolution in Great Britain itself, such subversive ideas were rejected, associated only with radical agitators.[5] 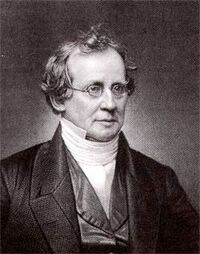 Conditions eased with economic recovery, and when Vestiges of the Natural History of Creation was anonymously published in 1844 its ideas of transmutation of species attracted wide public interest despite being attacked by the scientific establishment and many theologians who believed it to be in conflict with their interpretations of the biblical account of life's, especially humanity's, origin and development.[6] However, radical Quakers, Unitarians and Baptists welcomed the book's ideas of "natural law" as supporting their struggle to overthrow the privileges of the Church of England.[7]

Vestiges of the Natural History of Creation remained a best-seller, and paved the way for widespread interest in the theory of natural selection as introduced and published by English naturalist Charles Darwin in his 1859 book, On the Origin of Species. Darwin's book was praised by Unitarians as well as by liberal Anglican theologians whose Essays and Reviews (1860) sparked considerably more religious controversy in Britain than Darwin's publication, as its support of higher criticism questioned the historical accuracy of literal interpretations of the Bible and added declarations that miracles were irrational.[8]

Darwin's book revolutionized the way naturalists viewed the world. The book and its promotion attracted attention and controversy, and many theologians reacted to Darwin's theories. For example, in his 1874 work What is Darwinism? the theologian Charles Hodge argued that Darwin's theories were tantamount to atheism.[9] The controversy was fueled in part by one of Darwin's most vigorous promoters, Thomas Henry Huxley, who opined that Christianity is a "...compound of some of the best and some of the worst elements of Paganism and Judaism, moulded in practice by the innate character of certain people of the Western world..."[10] Perhaps the most uncompromising of the evolutionary philosophers was Ernst Haeckel, who dogmatically affirmed that nothing spiritual exists.[11]

A watershed in the Protestant objections to evolution occurred after about 1875.[12] Previously, citing Louis Agassiz and other scientific luminaries, Protestant contributors to religious quarterlies dismissed Darwin's theories as unscientific.[12] After 1875, it became clear that the majority of naturalists embraced evolution, and a sizable minority of these Protestant contributors rejected Darwin's theory because it called into question the veracity of Scriptures.[12] Even so, virtually none of these dissenters insisted on a young Earth.[13]

The greatest concern for creationists in the late 19th century was the issue of human ancestry. In the words of an 1896 religious tract: 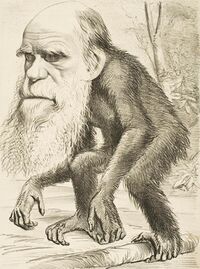 Creationists during this period were largely premillennialists, whose belief in Christ's return depended on a quasi-literal reading of the Bible.[13] However, they were not as concerned about geology, freely granting scientists any time they needed before the Edenic creation to account for scientific observations, such as fossils and geological findings.[15] In the immediate post-Darwinian era, few scientists or clerics rejected the antiquity of the earth, the progressive nature of the fossil record.[16] Likewise, few attached geological significance to the Biblical flood, unlike subsequent creationists.[16] Evolutionary skeptics, creationist leaders and skeptical scientists were usually either willing to adopt a figurative reading of the first chapter of Genesis, or allowed that the six days of creation were not necessarily 24-hour days.[17]

Initial reactions in the United States matched the developments in Britain, and when Alfred Russel Wallace went there for a lecture tour in 1886–1887 his explanations of "Darwinism" were welcomed without any problems, but attitudes changed after the First World War.[3] The controversy became political when public schools began teaching that man evolved from earlier forms of life per Darwin's theory of natural selection. In response, the U.S. state of Tennessee passed the Butler Act of 1925 prohibiting the teaching of any theory of the origins of humans that contradicted the teachings of the Bible. This law was tested in the highly publicized Scopes Trial of 1925. The law was upheld by the Tennessee Supreme Court, and remained on the books until 1967 when it was repealed. In 1968, the U.S. Supreme Court ruled in Epperson v. Arkansas that banning the teaching of specific theories contravened the Establishment Clause of the First Amendment to the United States Constitution because their primary purpose was religious.

Work in genetics culminating in the 1937 publication of Genetics and the Origin of Species by Theodosius Dobzhansky, combining Mendelian inheritance with Darwinian natural selection, and explaining, through neutral mutations, the source of the variation upon which evolution acted, led to a synthesis that brought together disparate fields of biology and other sciences into a strong, coherent explanation of evolution.[18] A campaign ensued, urging schools to teach the "fact" of evolution,[19] and in the 1960s, the federally supported Biological Sciences Curriculum Study[20] biology text books were introduced, promoting evolution as the organizing principle of biology.[21] The belief in the power of science amongst biologists was running especially high: One of the prominent creators of the modern evolutionary synthesis, Julian Huxley, made a religion of humanism, saying that a "drastic reorganization of our pattern of religious thought is now becoming necessary, from a god-centered to an evolutionary-centered pattern,"[22] and advocating the use of science to further expand human capacities.[23] Meanwhile, public opinion polls suggested that most Americans either believed that God specially created human beings or guided evolution.[24] Membership in churches favoring increasingly literal interpretations of Scripture continued to rise, with the Southern Baptist Convention and Lutheran Church–Missouri Synod outpacing all other denominations.[24] With growth, these churches became better equipped to promulgate a creationist message, with their own colleges, schools, publishing houses, and broadcast media.[21]

ICR and the co-opting of the creationist label

John C. Whitcomb and Henry M. Morris' influential The Genesis Flood: The Biblical Record and Its Scientific Implications was published in 1961.[26] The authors argued that creation was literally 6 days long, that humans lived concurrently with dinosaurs, and that God created each kind of life. With publication, Morris became a popular speaker, spreading anti-evolutionary ideas at fundamentalist churches, colleges, and conferences.[27] Morris set up the Creation Science Research Center (CSRC), an organization dominated by Baptists, as an adjunct to the Christian Heritage College.[28] The CSRC rushed publication of biology text books that promoted creationism.[28] These efforts were against the recommendations of Morris, who urged a more cautious and scientific approach.[28] Ultimately, the CSRC broke up, and Morris founded the Institute for Creation Research in 1970.[29] Morris promised that the ICR, unlike the CSRC, would be controlled and operated by scientists.[30] During this time, Morris and others who supported flood geology, adopted the scientific sounding terms scientific creationism and creation science.[31] The flood geologists effectively co-opted "the generic creationist label for their hyperliteralist views."[32] Previously, creationism was a generic term describing a philosophical perspective that presupposes the existence of a supernatural creator.[33]

The Catholic Church and evolution

Among the first recorded responses of a prominent Roman Catholic clergyman to Darwin's theory was that of the Blessed John Henry Newman, who in 1868, in a letter to a fellow priest, made the following comments:

Some point to the fact that before ordination all Catholic priests have to study the teachings of Thomas Aquinas, who subscribed to an Aristotelian view of evolution, in which he posits that animal species evolve by means of mutations and natural law.

More recent statements have been made by Pope John Paul II[35] and Pope Benedict XVI[36] that also support a theistic understanding of evolution.

The controversy continues to this day, with the scientific consensus on the origins and evolution of life actively attacked by creationist organizations and religious groups who desire to uphold other forms of creationism (usually young Earth creationism (YEC), creation science, old Earth creationism or intelligent design (ID)) as an alternative. Most of these groups are explicitly Christian, and more than one sees the debate as part of the Christian mandate to evangelize.[37]

Some see science and religion as being diametrically opposed views which cannot be reconciled. More accommodating viewpoints, held by mainstream churches and some scientists, consider science and religion to be separate categories of thought, which ask fundamentally different questions about reality and posit different avenues for investigating it.[38]

More recently, the intelligent design movement has taken an anti-evolution position which avoids any direct appeal to religion. However, Leonard Krishtalka, a paleontologist and an opponent of the movement, has called intelligent design "nothing more than creationism in a cheap tuxedo,"[39] and, in Kitzmiller v. Dover Area School District (2005) United States District Judge John E. Jones III ruled that "intelligent design is not science," but is "grounded in theology" and "cannot uncouple itself from its creationist, and thus religious, antecedents."[40] Before the trial began, U.S. President George W. Bush commented endorsing the teaching of intelligent design alongside evolution "I felt like both sides ought to be properly taught ... so people can understand what the debate is about."[41] Scientists argue that intelligent design does not represent any research program within the scientific community, and is opposed by most of the same groups who oppose creationism.[42]

Timeline of the controversy