Short description: Correlation as a function of distance 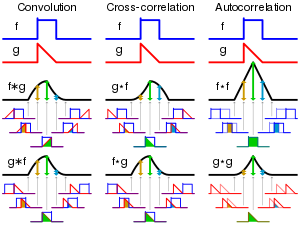 Correlation functions are a useful indicator of dependencies as a function of distance in time or space, and they can be used to assess the distance required between sample points for the values to be effectively uncorrelated. In addition, they can form the basis of rules for interpolating values at points for which there are no observations.

Correlation functions used in astronomy, financial analysis, econometrics, and statistical mechanics differ only in the particular stochastic processes they are applied to. In quantum field theory there are correlation functions over quantum distributions.

For possibly distinct random variables X(s) and Y(t) at different points s and t of some space, the correlation function is

where [math]\displaystyle{ \operatorname{corr} }[/math] is described in the article on correlation. In this definition, it has been assumed that the stochastic variables are scalar-valued. If they are not, then more complicated correlation functions can be defined. For example, if X(s) is a random vector with n elements and Y(t) is a vector with q elements, then an n×q matrix of correlation functions is defined with [math]\displaystyle{ i,j }[/math] element

If the random vector has only one component variable, then the indices [math]\displaystyle{ i,j }[/math] are redundant. If there are symmetries, then the correlation function can be broken up into irreducible representations of the symmetries — both internal and spacetime.

Probability distributions defined on a finite number of points can always be normalized, but when these are defined over continuous spaces, then extra care is called for. The study of such distributions started with the study of random walks and led to the notion of the Itō calculus.

The Feynman path integral in Euclidean space generalizes this to other problems of interest to statistical mechanics. Any probability distribution which obeys a condition on correlation functions called reflection positivity leads to a local quantum field theory after Wick rotation to Minkowski spacetime (see Osterwalder-Schrader axioms). The operation of renormalization is a specified set of mappings from the space of probability distributions to itself. A quantum field theory is called renormalizable if this mapping has a fixed point which gives a quantum field theory.