The Large Binocular Telescope (LBT) is an optical telescope for astronomy located on 10,700-foot (3,300 m) Mount Graham, in the Pinaleno Mountains of southeastern Arizona, United States. It is a part of the Mount Graham International Observatory.

The telescope design has two 8.4 m (330 inch) mirrors mounted on a common base, hence the name "binocular".[1] LBT takes advantage of active and adaptive optics, provided by Arcetri Observatory. The collecting area is two 8.4 meter aperture mirrors, which works out to about 111 m2 combined. This area is equivalent to an 11.8-meter (460 in) circular aperture, which would be greater than any other single telescope, but it is not comparable in many respects since the light is collected at a lower diffraction limit and is not combined in the same way. Also, an interferometric mode will be available, with a maximum baseline of 22.8 meters (75 ft) for aperture synthesis imaging observations and a baseline of 15 meters (49 ft) for nulling interferometry. This feature is along one axis with the LBTI instrument at wavelengths of 2.9–13 micrometres, which is the near infrared.[4]

The telescope was designed by a group of Italian firms, and assembled by Ansaldo in its Milanese plant.

LBT perched on an Arizona mountain

The choice of location sparked considerable local controversy, both from the San Carlos Apache Tribe, who view the mountain as sacred, and from environmentalists who contended that the observatory would cause the demise of an endangered subspecies of the American red squirrel, the Mount Graham red squirrel. Environmentalists and members of the tribe filed some forty lawsuits – eight of which ended up before a federal appeals court – but the project ultimately prevailed after an act of the United States Congress.

The telescope and mountain observatory survived two major forest fires in thirteen years, the more recent in the summer of 2017. Likewise the squirrels continue to survive. Some experts now believe their numbers fluctuate dependent upon nut harvest without regard to the observatory.[5][6]

Dome during the day with doors closed

The first binocular light images show three false-color renditions of the spiral galaxy NGC 2770. The galaxy is 88 million light years from our Milky Way, a relatively close neighbor. The galaxy has a flat disk of stars and glowing gas tipped slightly toward our line of sight.

The first image taken combined ultraviolet and green light, and emphasizes the clumpy regions of newly formed hot stars in the spiral arms. The second image combined two deep red colors to highlight the smoother distribution of older, cooler stars. The third image was a composite of ultraviolet, green and deep red light and shows the detailed structure of hot, moderate and cool stars in the galaxy. The cameras and images were produced by the Large Binocular Camera team, led by Emanuele Giallongo at the Rome Astrophysical Observatory.

In binocular aperture synthesis mode LBT has a light-collecting area of 111 m2, equivalent to a single primary mirror 11.8-meter (39 ft) in diameter, and will combine light to produce the image sharpness equivalent to a single 22.8-meter (75 ft) telescope. However, this requires a beam combiner that was tested in 2008, but has not been a part of regular operations.[10] It can take images with one side at 8.4 m aperture, or take two images of the same object using different instruments on each side of the telescope.

Interior looking down one of the primary mirrors

In the summer of 2010, the "First Light Adaptive Optics" (FLAO) – an adaptive optics system with a deformable secondary mirror rather than correcting atmospheric distortion further downstream in the optics – was inaugurated.[2][11] Using one 8.4 m side, it surpassed Hubble sharpness (at certain light wavelengths), achieving a Strehl ratio of 60–80% rather than the 20–30% of older adaptive optic systems, or the 1% typically achieved without adaptive optics for telescopes of this size.[11][12] Adaptive optics at a telescope's secondary (M2) was previously tested at MMT Observatory by the Arcetri Observatory and University of Arizona team.[13]

The telescope has also made appearances on an episode of the Discovery Channel TV show Really Big Things, National Geographic Channel Big, Bigger, Biggest,[14] and the BBC program The Sky At Night. The BBC Radio 4 radio documentary The New Galileos covered the LBT and the JWST.[15]

In 2017, LBT observed the OSIRIS-REx spacecraft, an unmanned asteroid sample return spacecraft, in space while it was en route.[18] 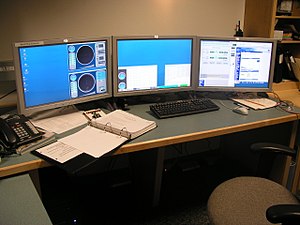 LUCI (originally LUCIFER: Large Binocular Telescope Near-infrared Spectroscopic Utility with Camera and Integral Field Unit for Extragalactic Research) is the near-infrared instrument for the LBT.[20][21] The name of the instrument was changed to LUCI in 2012. LUCI operates in the 0.9–2.5 µm spectral range using a 2048 x 2048 element Hawaii-2RG detector array from Teledyne and provides imaging and spectroscopic capabilities in seeing- and diffraction-limited modes. In its focal plane area, long-slit and multi-slit masks can be installed for single-object and multi-object spectroscopy. A fixed collimator produces an image of the entrance aperture in which either a mirror (for imaging) or a grating can be positioned. Three camera optics with numerical apertures of 1.8, 3.75 and 30 provide image scales of 0.25, 0.12, and 0.015 arcsec/detector element for wide field, seeing-limited and diffraction-limited observations. LUCI is operated at cryogenic temperatures, and is therefore enclosed in a cryostat of 1.6 m diameter and 1.6 m height, and cooled down to about −200 °C by two closed-cycle coolers.[20] 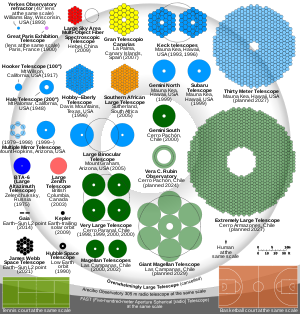 Partners in the LBT project [22]