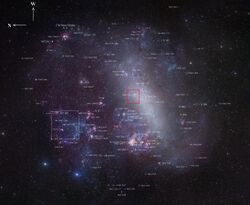 The nebula seems to be in an S-shape, but on closer inspection reveals to have extensions of the spiral arms, ending in a figure 8.[6] The unusual shape may be due to the combination of other nebula, or it may have been formed by perforation of the original molecular cloud by powerful stellar winds and explosions.

It may have also formed by a collision of two interstellar clouds, according to Annie Laval and Patricia Ambrocio-Cruz. The gas would have been compressed, forming the luminous stars seen today.[4]

DEM L132a is 88 parsecs across and encompasses the two luminous blue variables S Doradus and R85. However, those stars do not emit sufficient ionising radiation to produce the observed shell, and no other hot luminous stars are seen within the shell. It may have been produced by one or both of the LBVs during an earlier phase of their evolution. DEM L132b is 52 parsecs wide and surrounds two class O giants or supergiants and numerous other hot stars, which comfortably produce the necessary ionising radiation and fast winds to sculpt the bubble from the surrounding interstellar material. The WR bubble nebula is a similar size to DEM L132b and is produced by Brey 21, a binary containing a WN3 star and a B-type supergiant. DEM L123 is 158 parsecs across and its origins are unclear. No sufficiently powerful stars have been detected inside it that could produce it with their stellar wind (as this would require the power of 44 O6 supergiants) and it is ten times too energetic to have originated from a typical supernova. This bubble may have been created by a hypernova.[2]

The N119 nebula with the approximate location of the bubbles marked.[2]

N119 was first catalogued by Karl Henize, an American Astronomer, when he made a list of Hα emission-line stars and nebulae in 1956. The full designation is LHA 120-N 119: the 119th nebula on Lamont–Hussey Observatory H-alpha (Lamont-Hussey Alpha) plate 120. Plate 120 covered the Large Magellanic Cloud while plate 115 covered the Small Magellanic Cloud. LHA 120-S 119 is a Wolf–Rayet star in another part of the LMC. There is no LHA 115-N 119 since fewer nebulae were found on the SMC plate.[7]