Short description: Measure of the luminosity of celestial objects

Absolute magnitude (M) is a measure of the luminosity of a celestial object, on an inverse logarithmic astronomical magnitude scale. An object's absolute magnitude is defined to be equal to the apparent magnitude that the object would have if it were viewed from a distance of exactly 10 parsecs (32.6 light-years), without extinction (or dimming) of its light due to absorption by interstellar matter and cosmic dust. By hypothetically placing all objects at a standard reference distance from the observer, their luminosities can be directly compared among each other on a magnitude scale.

For Solar System bodies that shine in reflected light, a different definition of absolute magnitude (H) is used, based on a standard reference distance of one astronomical unit.

In stellar and galactic astronomy, the standard distance is 10 parsecs (about 32.616 light-years, 308.57 petameters or 308.57 trillion kilometres). A star at 10 parsecs has a parallax of 0.1″ (100 milliarcseconds). Galaxies (and other extended objects) are much larger than 10 parsecs, their light is radiated over an extended patch of sky, and their overall brightness cannot be directly observed from relatively short distances, but the same convention is used. A galaxy's magnitude is defined by measuring all the light radiated over the entire object, treating that integrated brightness as the brightness of a single point-like or star-like source, and computing the magnitude of that point-like source as it would appear if observed at the standard 10 parsecs distance. Consequently, the absolute magnitude of any object equals the apparent magnitude it would have if it were 10 parsecs away.

The measurement of absolute magnitude is made with an instrument called a bolometer. When using an absolute magnitude, one must specify the type of electromagnetic radiation being measured. When referring to total energy output, the proper term is bolometric magnitude. The bolometric magnitude usually is computed from the visual magnitude plus a bolometric correction, Mbol = MV + BC. This correction is needed because very hot stars radiate mostly ultraviolet radiation, whereas very cool stars radiate mostly infrared radiation (see Planck's law).

The Greek astronomer Hipparchus established a numerical scale to describe the brightness of each star appearing in the sky. The brightest stars in the sky were assigned an apparent magnitude m = 1, and the dimmest stars visible to the naked eye are assigned m = 6.[7] The difference between them corresponds to a factor of 100 in brightness. For objects within the immediate neighborhood of the Sun, the absolute magnitude M and apparent magnitude m from any distance d (in parsecs, with 1 pc = 3.2616 light-years) are related by [math]\displaystyle{ 100^{\frac{m-M}{5}}=\frac{F_{10}}{F} = \left(\frac{d}{10\;\mathrm{pc}}\right)^{2}, }[/math] where F is the radiant flux measured at distance d (in parsecs), F10 the radiant flux measured at distance 10 pc. Using the common logarithm, the equation can be written as [math]\displaystyle{ M = m - 5 \log_{10}(d_\text{pc})+5 = m - 5 \left(\log_{10}d_\text{pc}-1\right), }[/math] where it is assumed that extinction from gas and dust is negligible. Typical extinction rates within the Milky Way galaxy are 1 to 2 magnitudes per kiloparsec, when dark clouds are taken into account.[8]

For objects at very large distances (outside the Milky Way) the luminosity distance dL (distance defined using luminosity measurements) must be used instead of d, because the Euclidean approximation is invalid for distant objects. Instead, general relativity must be taken into account. Moreover, the cosmological redshift complicates the relationship between absolute and apparent magnitude, because the radiation observed was shifted into the red range of the spectrum. To compare the magnitudes of very distant objects with those of local objects, a K correction might have to be applied to the magnitudes of the distant objects.

The bolometric magnitude Mbol, takes into account electromagnetic radiation at all wavelengths. It includes those unobserved due to instrumental passband, the Earth's atmospheric absorption, and extinction by interstellar dust. It is defined based on the luminosity of the stars. In the case of stars with few observations, it must be computed assuming an effective temperature.

In August 2015, the International Astronomical Union passed Resolution B2[9] defining the zero points of the absolute and apparent bolometric magnitude scales in SI units for power (watts) and irradiance (W/m2), respectively. Although bolometric magnitudes had been used by astronomers for many decades, there had been systematic differences in the absolute magnitude-luminosity scales presented in various astronomical references, and no international standardization. This led to systematic differences in bolometric corrections scales.[10] Combined with incorrect assumed absolute bolometric magnitudes for the Sun, this could lead to systematic errors in estimated stellar luminosities (and other stellar properties, such as radii or ages, which rely on stellar luminosity to be calculated).

The new IAU absolute magnitude scale permanently disconnects the scale from the variable Sun. However, on this SI power scale, the nominal solar luminosity corresponds closely to Mbol = 4.74, a value that was commonly adopted by astronomers before the 2015 IAU resolution.[10]

The luminosity of the star in watts can be calculated as a function of its absolute bolometric magnitude Mbol as: [math]\displaystyle{ L_\star = L_0 10^{-0.4 M_\mathrm{bol}} }[/math] using the variables as defined previously.

For planets and asteroids, a definition of absolute magnitude that is more meaningful for non-stellar objects is used. The absolute magnitude, commonly called [math]\displaystyle{ H }[/math], is defined as the apparent magnitude that the object would have if it were one astronomical unit (AU) from both the Sun and the observer, and in conditions of ideal solar opposition (an arrangement that is impossible in practice).[12] Because Solar System bodies are illuminated by the Sun, their brightness varies as a function of illumination conditions, described by the phase angle. This relationship is referred to as the phase curve. The absolute magnitude is the brightness at phase angle zero, an arrangement known as opposition, from a distance of one AU. 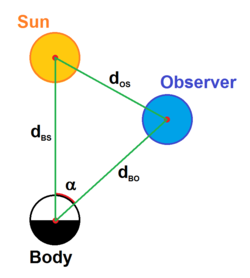 The phase angle [math]\displaystyle{ \alpha }[/math] can be calculated from the distances body-sun, observer-sun and observer-body, using the law of cosines.

The value of [math]\displaystyle{ q(\alpha) }[/math] depends on the properties of the reflecting surface, in particular on its roughness. In practice, different approximations are used based on the known or assumed properties of the surface.[13] 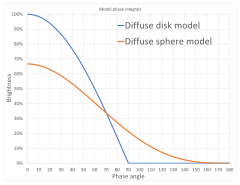 Brightness with phase for diffuse reflection models. The sphere is 2/3 as bright at zero phase, while the disk can't be seen beyond 90 degrees.

By contrast, a diffuse disk reflector model is simply [math]\displaystyle{ q(\alpha) = \cos{\alpha} }[/math], which isn't realistic, but it does represent the opposition surge for rough surfaces that reflect more uniform light back at low phase angles.

Because Solar System bodies are never perfect diffuse reflectors, astronomers use different models to predict apparent magnitudes based on known or assumed properties of the body.[13] For planets, approximations for the correction term [math]\displaystyle{ -2.5\log_{10}{q(\alpha)} }[/math] in the formula for m have been derived empirically, to match observations at different phase angles. The approximations recommended by the Astronomical Almanac[20] are (with [math]\displaystyle{ \alpha }[/math] in degrees):

Earth's albedo varies by a factor of 6, from 0.12 in the cloud-free case to 0.76 in the case of altostratus cloud. The absolute magnitude here corresponds to an albedo of 0.434. Earth's apparent magnitude cannot be predicted as accurately as that of most other planets.[20]

Asteroid 1 Ceres, imaged by the Dawn spacecraft at phase angles of 0°, 7° and 33°. The left image at 0° phase angle shows the brightness surge due to the opposition effect. 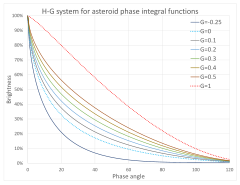 If an object has an atmosphere, it reflects light more or less isotropically in all directions, and its brightness can be modelled as a diffuse reflector. Bodies with no atmosphere, like asteroids or moons, tend to reflect light more strongly to the direction of the incident light, and their brightness increases rapidly as the phase angle approaches [math]\displaystyle{ 0^{\circ} }[/math]. This rapid brightening near opposition is called the opposition effect. Its strength depends on the physical properties of the body's surface, and hence it differs from asteroid to asteroid.[13]

The apparent magnitude of asteroids varies as they rotate, on time scales of seconds to weeks depending on their rotation period, by up to [math]\displaystyle{ 2\text{ mag} }[/math] or more.[28] In addition, their absolute magnitude can vary with the viewing direction, depending on their axial tilt. In many cases, neither the rotation period nor the axial tilt are known, limiting the predictability. The models presented here do not capture those effects.[24][13]

The absolute magnitude of any given comet can vary dramatically. It can change as the comet becomes more or less active over time or if it undergoes an outburst. This makes it difficult to use the absolute magnitude for a size estimate. When comet 289P/Blanpain was discovered in 1819, its absolute magnitude was estimated as [math]\displaystyle{ M_{1} = 8.5 }[/math].[38] It was subsequently lost and was only rediscovered in 2003. At that time, its absolute magnitude had decreased to [math]\displaystyle{ M_{1} = 22.9 }[/math],[40] and it was realised that the 1819 apparition coincided with an outburst. 289P/Blanpain reached naked eye brightness (5–8 mag) in 1819, even though it is the comet with the smallest nucleus that has ever been physically characterised, and usually doesn't become brighter than 18 mag.[38][39]

For some comets that have been observed at heliocentric distances large enough to distinguish between light reflected from the coma, and light from the nucleus itself, an absolute magnitude analogous to that used for asteroids has been calculated, allowing to estimate the sizes of their nuclei.[41]

For a meteor, the standard distance for measurement of magnitudes is at an altitude of 100 km (62 mi) at the observer's zenith.[42][43]