SN Refsdal is the first detected multiply-lensed supernova, visible within the field of the galaxy cluster MACS J1149+2223. It was given its nickname in honor of the Norwegian astrophysicist Sjur Refsdal, who, in 1964, first proposed using time-delayed images from a lensed supernova to study the expansion of the universe.[1][2][3] The observations were made using the Hubble Space Telescope.[4]

The host galaxy of SN Refsdal is at a redshift of 1.49, corresponding to a comoving distance of 14.4 billion light-years and a lookback time of 9.34 billion years.[5] The multiple images are arranged around the elliptical galaxy at z = 0.54 in a cross-shaped pattern, also known as an "Einstein cross".[1] 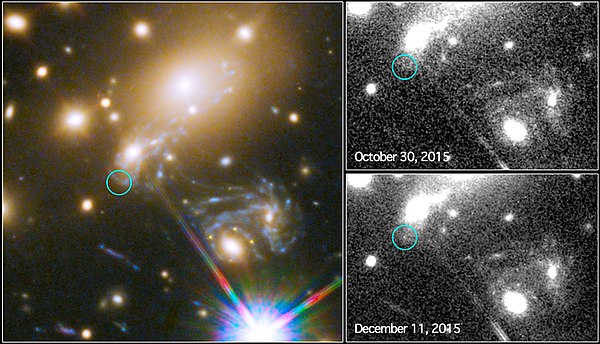 The image to the left shows a part of the deep field observation of the galaxy cluster MACS J1149.5+2223 from the Frontier Fields programme. The circle indicates the predicted position of the newest appearance of the supernova. To the lower right the Einstein cross event from late 2014 is visible. The image on the top right shows observations by Hubble from October 2015, taken at the beginning of the observation programme to detect the newest appearance of the supernova. The image on the lower right shows the discovery of the Refsdal Supernova on 11 December 2015, as predicted by several different models.

After the discovery of the Refsdal Supernova, astronomers predicted that they would have the rare opportunity to see the supernova again in about one year, after the four images had faded away. This is because the initially observed four-image pattern was only one component of the lensing display. The supernova may have appeared as a single image some 40–50 years ago elsewhere in the cluster field.[1]

The supernova Refsdal reappeared punctually at the predicted position between mid-November 2015 and December 11, 2015[6] (with the exact date being uncertain by approximately one month which is the interval between two consecutive Hubble observations),[7] in excellent agreement with the blind model predictions made before the reappearance was observed.[8][9][10] The time delay between the original quadruplet observed in 2014 and the latest appearance of the supernova in 2015 was used to infer the value of the Hubble constant. This is the first time this technique, originally suggested by Refsdal, has been applied to supernovae.[11]