In a binary system consisting of a white dwarf and a companion star, the white dwarf strips away material from its companion. Normally the white dwarf would eventually reach a critical mass, and fusion reactions would make it explode and completely dissipate it, but in a Type Iax supernova, only half of the dwarf's mass is lost.[8] 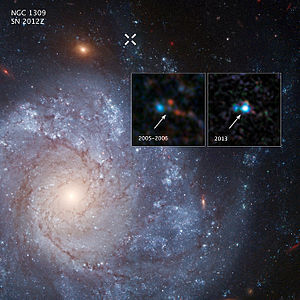 The two inset images show before-and-after images captured by NASA's Hubble Space Telescope of Supernova 2012Z in the spiral galaxy NGC 1309. The white X at the top of the main image marks the location of the supernova in the galaxy.

Supernova SN 2012Z in the NGC 1309 galaxy is thought to be of Type Iax, and was discovered in 2012 by S. B. Cenko, W. Li, and A. V. Filippenko using the Katzman Automatic Imaging Telescope on January 29.15 UT as part of the Lick Observatory Supernova Search. It is believed that the more massive of the binary stars at the heart of the supernova lost substantial amounts of its hydrogen and helium to its smaller companion, becoming a white dwarf. The companion star then became larger and engulfed the white dwarf, ejecting the outer hydrogen layers of the combined star and leaving behind a helium core. In turn, the white dwarf drained matter from the companion star until the dwarf became so unstable that it exploded as a supernova, with a zombie star left behind as a remnant.[3]

There were images of the area from before the supernova, allowing before and after images, and the process of the supernova to be studied. To test the zombie star hypothesis, the area was observed again a few years after the event. The authors found that the decline of the light curve was consistent with the existence of a radioactively-heated bound remnant, but that it was difficult to come up with a model that could explain the whole light curve.[9]

This discovery is a milestone in a decades long search by astronomers for such an occurrence; the observation of SN 2012Z was the first time astrophysicists were able to identify a star system that later went supernova.[8]