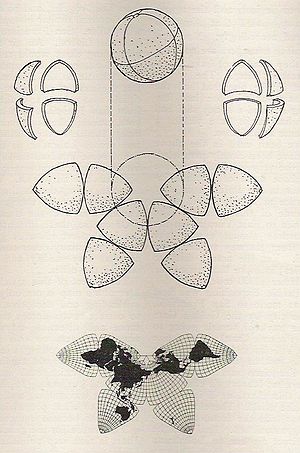 Bernard Joseph Stanislaus Cahill (London , January 30, 1866 - Alameda County, October 4, 1944[1][2]), American cartographer and architect, was the inventor of the octahedral "Butterfly Map" (published in 1909 and patented in 1913[3]). An early proponent of the San Francisco Civic Center, he also designed hotels, factories and mausoleums like the Columbarium of San Francisco.

His Butterfly World Map, like Buckminster Fuller's later Dymaxion map of 1943 and 1954, enabled all continents to be uninterrupted, and with reasonable fidelity to a globe. Cahill demonstrated this principle by also inventing a rubber-ball globe which could be flattened under a pane of glass in the "butterfly" form, then return to its ball shape.

A variant was developed by Gene Keyes in 1975, the Cahill–Keyes projection.