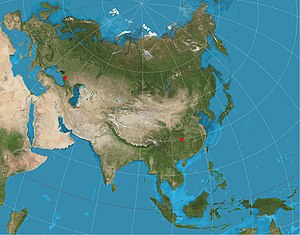 Two-point equidistant projection of the entire world with Tissot's indicatrix of deformation. The two points are Rome, Italy and Luoyang, China.

The projection has been used for all maps of the Asian continent by the National Geographic Society atlases since 1959,[1] though its purpose in that case was to reduce distortion throughout Asia rather than to measure from the two loci.[2] The projection sometimes appears in maps of air routes. The Chamberlin trimetric projection is a logical extension of the two-point idea to three points, but the three-point case only yields a sort of minimum error for distances from the three loci, rather than yielding correct distances. Tobler extended this idea to arbitrarily large number of loci by using automated root-mean-square minimization techniques rather than using closed-form formulae.[3]