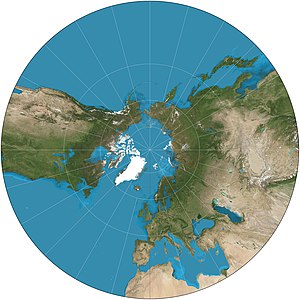 The gnomonic projection with Tissot's indicatrix of deformation

A gnomonic map projection displays all great circles as straight lines, resulting in any straight line segment on a gnomonic map showing a geodesic, the shortest route between the segment's two endpoints. This is achieved by casting surface points of the sphere onto a tangent plane, each landing where a ray from the center of the sphere passes through the point on the surface and then on to the plane. No distortion occurs at the tangent point, but distortion increases rapidly away from it. Less than half of the sphere can be projected onto a finite map.[1] Consequently, a rectilinear photographic lens, which is based on the gnomonic principle, cannot image more than 180 degrees.

The gnomonic projection is said to be the oldest map projection, developed by Thales in the 6th century BC[1]:164. The path of the shadow-tip or light-spot in a nodus-based sundial traces out the same hyperbolae formed by parallels on a gnomonic map.

As with all azimuthal projections, angles from the tangent point are preserved. The map distance from that point is a function r(d) of the true distance d, given by

where R is the radius of the Earth. The radial scale is

and the transverse scale

so the transverse scale increases outwardly, and the radial scale even more.

The gnomonic projection is used extensively in photography, where it is called rectilinear projection. Because they are equivalent, the same viewer used for photographic panoramas can be used to render gnomonic maps Template:PanoLink.

The gnomonic projection is used in astronomy where the tangent point is centered on the object of interest. The sphere being projected in this case is the celestial sphere, R = 1, and not the surface of the Earth.

Comparison of the Gnomonic projection and some azimuthal projections centred on 90° N at the same scale, ordered by projection altitude in Earth radii. (click for detail)