The world on a Dymaxion projection, with 15° graticule

The Dymaxion projection with Tissot's indicatrix of deformation. 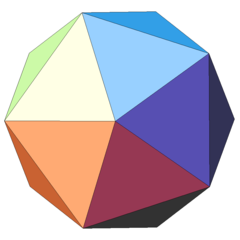 An icosahedron, the shape the world map is projected onto before unfolding 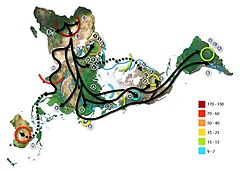 The Dymaxion map or Fuller map is a projection of a world map onto the surface of an icosahedron, which can be unfolded and flattened to two dimensions. The flat map is heavily interrupted in order to preserve shapes and sizes.

The projection was invented by Buckminster Fuller. The March 1, 1943 edition of Life magazine included a photographic essay titled "Life Presents R. Buckminster Fuller's Dymaxion World". The article included several examples of its use together with a pull-out section that could be assembled as a "three-dimensional approximation of a globe or laid out as a flat map, with which the world may be fitted together and rearranged to illuminate special aspects of its geography."[1] Fuller applied for a patent in the United States in February 1944, the patent application showing a projection onto a cuboctahedron. The patent was issued in January 1946.[2]

The 1954 version published by Fuller, made with co-cartographer Shoji Sadao, the Airocean World Map, used a modified but mostly regular icosahedron as the base for the projection, which is the version most commonly referred to today. This version depicts the Earth's continents as "one island", or nearly contiguous land masses.

The Dymaxion projection is intended only for representations of the entire globe. It is not a gnomonic projection, whereby global data expands from the center point of a tangent facet outward to the edges. Instead, each triangle edge of the Dymaxion map matches the scale of a partial great circle on a corresponding globe, and other points within each facet shrink toward its middle, rather than enlarging to the peripheries.[3] Fuller's 1980 version of the Dymaxion map was the first definition and use of a mathematical transformation process to make the map.[4][5][6][7]

The name Dymaxion was applied by Fuller to several of his inventions.

Fuller claimed that his map had several advantages over other projections for world maps.

More unusually, the Dymaxion map does not have any "right way up". Fuller argued that in the universe there is no "up" and "down", or "north" and "south": only "in" and "out".[8] Gravitational forces of the stars and planets created "in", meaning "towards the gravitational center", and "out", meaning "away from the gravitational center". He attributed the north-up-superior/south-down-inferior presentation of most other world maps to cultural bias.

Fuller intended the map to be unfolded in different ways to emphasize different aspects of the world.[9] Peeling the triangular faces of the icosahedron apart in one way results in an icosahedral net that shows an almost contiguous land mass comprising all of Earth's continents – not groups of continents divided by oceans. Peeling the solid apart in a different way presents a view of the world dominated by connected oceans surrounded by land.

Showing the continents as "one island earth" also helped Fuller explain, in his book Critical Path, the journeys of early seafaring people, who were in effect using prevailing winds to circumnavigate this world island.

However, the Dymaxion map can also prove difficult to use. It is, for example, confusing to describe the four cardinal directions and locate geographic coordinates. The awkward shape of the map may be counterintuitive to most people trying to use it. For example, tracing a path from India to Chile may be confusing. Depending on how the map is projected, land masses and oceans are often divided into several pieces.

A 1967 Jasper Johns painting, Map (Based on Buckminster Fuller's Dymaxion Airocean World), depicting a Dymaxion map, hangs in the permanent collection of the Museum Ludwig in Cologne.[10][11]

The World Game, a collaborative simulation game in which players attempt to solve world problems,[12][13] is played on a 70-by-35-foot Dymaxion map.[14]

In 2013, to commemorate the 70th anniversary of the publication of the Dymaxion map in Life magazine, the Buckminster Fuller Institute announced the "Dymax Redux", a competition for graphic designers and visual artists to re-imagine the Dymaxion map.[15][16] The competition received over 300 entries from 42 countries.[15]

In 2020, the Build the Earth project created a new map projection called Modified Airocean, based on the Dymaxion/Airocean projection. This map projection provides an extremely low amount of distortion of both shapes and sizes on land, at the cost of heavily distorting the oceans. Unlike a typical Airocean projection, Modified Airocean is not intended to be unfolded into a 3D object like an icosahedron, and has its continents placed such that it looks somewhat similar to an equirectangular projection.[17]