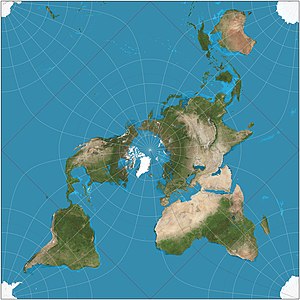 Peirce quincuncial projection of the world. The red equator is a square whose corners are the only four points on the map at which the projection fails to be conformal. 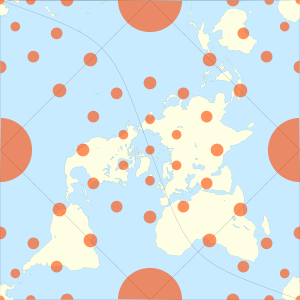 The Peirce quincuncial projection with Tissot's indicatrix of deformation.

The Peirce quincuncial projection[1] is a conformal map projection developed by Charles Sanders Peirce in 1879. The projection has the distinctive property that it can be tiled ad infinitum on the plane, with edge-crossings being completely smooth except for four singular points per tile. The projection has seen use in digital photography for portraying 360° views. The description quincuncial refers to the arrangement of four quadrants of the globe around the center hemisphere in an overall square pattern. Typically the projection is oriented such that the north pole lies at the center.

The maturation of complex analysis led to general techniques for conformal mapping, where points of a flat surface are handled as numbers on the complex plane. While working at the U.S. Coast and Geodetic Survey, the American philosopher Charles Sanders Peirce published his projection in 1879 (Peirce 1879),[2] having been inspired by H. A. Schwarz's 1869 conformal transformation of a circle onto a polygon of n sides (known as the Schwarz–Christoffel mapping). In the normal aspect, Peirce's projection presents the Northern Hemisphere in a square; the Southern Hemisphere is split into four isosceles triangles symmetrically surrounding the first one, akin to star-like projections. In effect, the whole map is a square, inspiring Peirce to call his projection quincuncial, after the arrangement of five items in a quincunx.

After Peirce presented his projection, two other cartographers developed similar projections of the hemisphere (or the whole sphere, after a suitable rearrangement) on a square: Guyou in 1887 and Adams in 1925.[3] The three projections are transversal versions of each other (see related projections below).

where sd is the ratio of two Jacobi elliptic functions: sn/dn; w is the mapped point on the plane as a complex number (w = x + iy); and r is the stereographic projection with a scale of 1/2 at the center. An elliptic integral of the first kind can be used to solve for w. The comma notation used for sd(u,k) means that 1/√2 is the modulus for the elliptic function ratio, as opposed to the parameter [which would be written sd(u|m)] or the amplitude [which would be written sd(u\α)]. The mapping has a scale factor of 1/2 at the center, like the generating stereographic projection.

According to Peirce, his projection has the following properties (Peirce, 1879):

The projection tessellates the plane; i.e., repeated copies can completely cover (tile) an arbitrary area, each copy's features exactly matching those of its neighbors. (See the example to the right). Furthermore, the four triangles of the second hemisphere of Peirce quincuncial projection can be rearranged as another square that is placed next to the square that corresponds to the first hemisphere, resulting in a rectangle with aspect ratio of 2:1; this arrangement is equivalent to the transverse aspect of the Guyou hemisphere-in-a-square projection.[6]

Using the Peirce quincuncial projection to present a spherical panorama.

Like many other projections based upon complex numbers, the Peirce quincuncial has been rarely used for geographic purposes. One of the few recorded cases is in 1946, when it was used by the U.S. Coast and Geodetic Survey world map of air routes.[6] It has been used recently to present spherical panoramas for practical as well as aesthetic purposes, where it can present the entire sphere with most areas being recognizable.[7]

In transverse aspect, one hemisphere becomes the Adams hemisphere-in-a-square projection (the pole is placed at the corner of the square). Its four singularities are at the North Pole, the South Pole, on the equator at 25°W, and on the equator at 155°E, in the Arctic, Atlantic, and Pacific oceans, and in Antarctica.[8] That great circle divides the traditional Western and Eastern hemispheres.

In oblique aspect (45 degrees) of one hemisphere becomes the Guyou hemisphere-in-a-square projection (the pole is placed in the middle of the edge of the square). Its four singularities are at 45 degrees north and south latitude on the great circle composed of the 20°W meridian and the 160°E meridians, in the Atlantic and Pacific oceans.[8] That great circle divides the traditional western and eastern hemispheres.