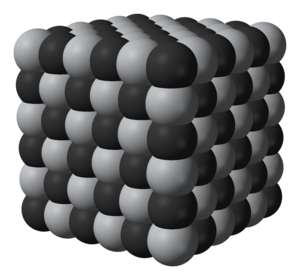 In chemistry, a carbide usually describes a compound composed of carbon and a metal. In metallurgy, carbiding or carburizing is the process for producing carbide coatings on a metal piece.[1]

The carbides of the group 4, 5 and 6 transition metals (with the exception of chromium) are often described as interstitial compounds.[2] These carbides have metallic properties and are refractory. Some exhibit a range of stoichiometries, being a non-stoichiometric mixture of various carbides arising due to crystal defects. Some of them, including titanium carbide and tungsten carbide, are important industrially and are used to coat metals in cutting tools.[3]

The long-held view is that the carbon atoms fit into octahedral interstices in a close-packed metal lattice when the metal atom radius is greater than approximately 135 pm:[2]

The following table[2][3] shows actual structures of the metals and their carbides. (N.B. the body centered cubic structure adopted by vanadium, niobium, tantalum, chromium, molybdenum and tungsten is not a close-packed lattice.) The notation "h/2" refers to the M2C type structure described above, which is only an approximate description of the actual structures. The simple view that the lattice of the pure metal "absorbs" carbon atoms can be seen to be untrue as the packing of the metal atom lattice in the carbides is different from the packing in the pure metal, although it is technically correct that the carbon atoms fit into the octahedral interstices of a close-packed metal lattice.

For a long time the non-stoichiometric phases were believed to be disordered with a random filling of the interstices, however short and longer range ordering has been detected.[4]

Iron forms a number of carbides, Fe3C, Fe7C3 and Fe2C. The best known is cementite, Fe3C, which is present in steels. These carbides are more reactive than the interstitial carbides; for example, the carbides of Cr, Mn, Fe, Co and Ni are all hydrolysed by dilute acids and sometimes by water, to give a mixture of hydrogen and hydrocarbons. These compounds share features with both the inert interstitials and the more reactive salt-like carbides.[2]

Some metals, such as lead and tin, are believed not to form carbides under any circumstances.[5] There exists however a mixed titanium-tin carbide, which is a two-dimensional conductor.[6]

Salt-like carbides are composed of highly electropositive elements such as the alkali metals, alkaline earth metals, and group 3 metals, including scandium, yttrium, and lanthanum. Aluminium from group 13 forms carbides, but gallium, indium, and thallium do not. These materials feature isolated carbon centers, often described as "C4−", in the methanides or methides; two-atom units, "C2−2", in the acetylides; and three-atom units, "C4−3", in the allylides.[2] The graphite intercalation compound KC8, prepared from vapour of potassium and graphite, and the alkali metal derivatives of C60 are not usually classified as carbides.[7]

Methanides are a subset of carbides distinguished by their tendency to decompose in water producing methane. Three examples are aluminium carbide Al4C3, magnesium carbide Mg2C[8] and beryllium carbide Be2C.

Transition metal carbides are not saline carbides but their reaction with water is very slow and is usually neglected. For example, depending on surface porosity, 5–30 atomic layers of titanium carbide are hydrolyzed, forming methane within 5 minutes at ambient conditions, following by saturation of the reaction.[9]

Note that methanide in this context is a trivial historical name. According to the IUPAC systematic naming conventions, a compound such as NaCH3 would be termed a "methanide", although this compound is often called methylsodium.[10] 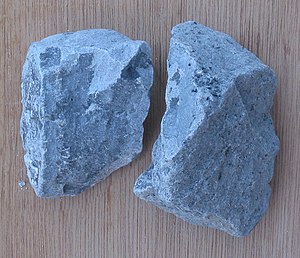 Several carbides are assumed to be salts of the acetylide anion C2–2 (also called percarbide, by analogy with peroxide), which has a triple bond between the two carbon atoms. Alkali metals, alkaline earth metals, and lanthanoid metals form acetylides, for example, sodium carbide Na2C2, calcium carbide CaC2, and LaC2.[2] Lanthanides also form carbides (sesquicarbides, see below) with formula M2C3. Metals from group 11 also tend to form acetylides, such as copper(I) acetylide and silver acetylide. Carbides of the actinide elements, which have stoichiometry MC2 and M2C3, are also described as salt-like derivatives of C2−2.

The C–C triple bond length ranges from 119.2 pm in CaC2 (similar to ethyne), to 130.3 pm in LaC2 and 134 pm in UC2. The bonding in LaC2 has been described in terms of LaIII with the extra electron delocalised into the antibonding orbital on C2−2, explaining the metallic conduction.[2]

The polyatomic ion C4−3, sometimes called allylide, is found in Li4C3 and Mg2C3. The ion is linear and is isoelectronic with CO2.[2] The C–C distance in Mg2C3 is 133.2 pm.[11] Mg2C3 yields methylacetylene, CH3CCH, and propadiene, CH2CCH2, on hydrolysis, which was the first indication that it contains C4−3.

The carbides of silicon and boron are described as "covalent carbides", although virtually all compounds of carbon exhibit some covalent character. Silicon carbide has two similar crystalline forms, which are both related to the diamond structure.[2] Boron carbide, B4C, on the other hand, has an unusual structure which includes icosahedral boron units linked by carbon atoms. In this respect boron carbide is similar to the boron rich borides. Both silicon carbide (also known as carborundum) and boron carbide are very hard materials and refractory. Both materials are important industrially. Boron also forms other covalent carbides, such as B25C. 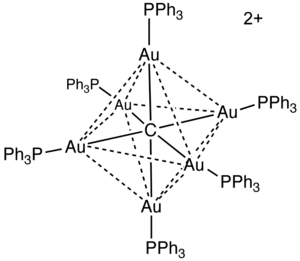 Metal complexes containing C are known as metal carbido complexes. Most common are carbon-centered octahedral clusters, such as [Au6C(PΦ3)6]2+ (where Φ or "Ph" represents a hexagonal carbon ring: a phenyl group) and [Fe6C(CO)6]2−. Similar species are known for the metal carbonyls and the early metal halides. A few terminal carbides have been isolated, such as [CRuCl2{P(C6H11)3}2].

Metallocarbohedrynes (or "met-cars") are stable clusters with the general formula M8C12 where M is a transition metal (Ti, Zr, V, etc.).

In addition to the carbides, other groups of related carbon compounds exist:[2]