The Mazda Bongo (Japanese: マツダ・ボンゴ, Hepburn: Matsuda Bongo), also known as Mazda E-Series and the Ford Econovan, is a van and pickup truck manufactured by the Japan ese automobile manufacturer Mazda since 1966, in a cabover configuration except for the Friendee variant. It has been built with rear-, middle-, as well as front-mounted engines. It also formed the basis for the long running Kia Bongo range. It is named for the African Bongo, a type of antelope. 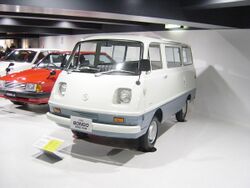 The rear-engined Bongos had a full chassis (using the same Mazda 1000 engine as other variants mounted to a four-speed transaxle at the rear) and were very strong and due to the low gearing, able to carry half a ton. Due to rust and poor maintenance, these Bongos are now rare. The 1000 pickup which was built for commercial uses, and the cargo and passenger vans all used a double wishbone and coil spring suspension for the front wheels, and a trailing-arm suspension and coil springs at the rear wheels.

Due to the popularity of the Bongo, Mazda decided to manufacture a minibus, called the Mazda Parkway starting in 1974 until 1997, shared with the larger Mazda Titan truck platform. 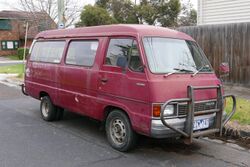 After a two-year hiatus, the next Bongo van appeared in September 1977. It was a mid-engine rear wheel drive vehicle. Ford sold this version of the van as the Ford Econovan, while Mazda sold it for export as the E1300, E1400, and E1600, depending on engine size. Beginning in October 1979 a 2.2-litre diesel engine was also available in commercial versions, sold in export as the E2200. This appeared in the passenger version "Bongo Multi Wagon" in February 1980.[8] The Bongo Multi Wagon had originally been sold with a 1.8-liter petrol engine only. As the E1600, this model went on sale in Great Britain in 1982, only a year before being replaced. The British market only received the long wheelbase 1-tonne panel van version with small, twinned rear wheels. The UK model has a five-speed manual gearbox with a column mounted shifter.[9]

This generation was also manufactured by Kia in South Korea, as the Kia Bongo and Ceres. The Bongo/Ceres underwent a number of facelifts and was still available as late as 1999.

The original version has round headlights and no grille; after a facelift the second generation Bongo/E-series had rectangular headlights and a more traditional grille. This took place in January 1981.[8] This generation Bongo was the best-selling Mazda vehicle from its introduction until 1981, when it was surpassed by the front-wheel drive Mazda Familia. 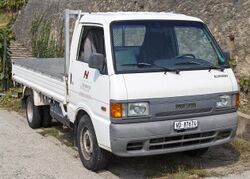 The Bongo was redesigned in 1983 with new engines. It was also sold by Ford in Asia as the "Spectron" (passenger version) or as the "J80" (cargo model). In Australia, the Bongo was sold by Mazda as the E-series, with Ford also retailing the commercial version as the "Ford Econovan" and the passenger version as the "Ford Spectron" (1983–1990). From 1994 onwards, the Bongo was also sold by Nissan as the Vanette. In South Korea this was built as the Kia Wide Bongo. In South Africa, it was sold as the Ford Spectron.

During the 1980s, Toyota, Nissan, and Mitsubishi all sold versions of their utility vans in the United States, however none achieved any real market success and so Mazda decided not to bring the Bongo to the US. Instead, they created the more passenger car-like MPV for the American market.

In Australia, it was sold as the Mazda E-series and the Mazda Traveller [12] and also as the Ford Econovan and Ford Spectron. The entry-level Econovan offered a 4-metre (13.1 ft) length, 1.8-litre petrol engine, five-speed manual of four-speed automatic, single rear wheels, in three-seater steel-sided or six seater XL window-sided forms.[13] Prior to 1986, there was also a 1.4-litre engine and five-speed manual option available as a steel-sided van with single- or dual-rear wheels, and as a passenger-carrying XL van with single-rear wheels.[14][15]

In December 1985, Ford updated the Econovan in Australia to upgrade the engines for unleaded petrol.[17] The petrol engine fitted to 4.0-metre Econovan increased in displacement from 1.4 to 1.8 litres, and the 4.4-metre Maxi had its petrol engine increased from 1.8 to 2.0 litres.[17] The 4.0- and 4.4-metre Econovan also gained the availability of four-speed automatic, previously fitted only to the Spectron vans.[17] The 4.7-metre Maxi van, previously available only with dual rear wheels, was now also available with single rear wheels, although crew cab and cab chassis models remained as dual rear wheel propositions.[17] Ford stated that all petrol manuals and the 4.4-metre petrol automatic Maxi were designed to run on both leaded and unleaded fuel, although the 4.0-metre petrol automatic will run only on unleaded.[17] At the same time as these powertrain updates, Ford also made some cosmetic changes to the Spectron.[17] The low-roof Spectron added colour-keyed bumpers and a new side stripe, matched to a new beige cloth interior trim, and on the XLT the old beige interior colour switched to grey.[17]

A new long-wheelbase version known as the Bongo Brawny was also introduced, three months before the regular Bongo. The Brawny was larger than the regular Bongo in by all key measures (wheelbase, length, width, height, and weight). In export markets this model was again sold as the E-series. In Australia, Ford differentiated the long-wheelbase versions with the "Econovan Maxi" identifier. In Korea, it is also known as Kia Wide Bongo for truck variant and Kia Besta for van variant

In June 1999, a new generation of Bongo vans and trucks went on sale, which were also rebadged as the Mazda E-series, Ford Econovan, Mitsubishi Delica Van/Truck, and Nissan Vanette. This model adopted the SK platform which was based on the previous generation SS/SE model. This was sold at various Mazda, Mazda Anfini and Mazda Autozam dealers.[18] In August 20, 2010, an upgraded Bongo truck/van were officially released in Japan.[19]

Mazda's difficult business environment at the time meant they could not afford to build a full brand new platform. A petrol 1.8-litre EGI F8-E with 90 PS (66 kW) and a diesel 2.2-litre R2 with 79 PS (58 kW) were available. Mazda announced that this is the last generation of in-house designed Bongo vans and trucks in March 2012. Mazda discontinued the Bongo in 2020 and it will focus on fuel efficient passenger cars.

The Bongo was reintroduced in July 2020 in Japan and based on the Daihatsu Gran Max.[21][22] It is available in van and truck model.

The Bongo Brawny was reintroduced in April 2019 in Japan as a badge engineered fifth-generation Toyota HiAce.[4] Unlike the previous model, it is intended to be a larger commercial van as opposed to a passenger van. 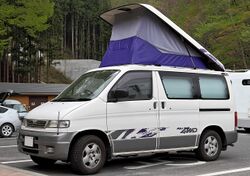 The Bongo Friendee was introduced in June 1995 and is based on the SG platform. It was an eight-seater minivan and it was also sold in the Japanese home market as the Ford Freda.

They are usually (but not exclusively) available in automatic transmissions, and come in 2WD (SGL3) and 4WD (SGL5) versions. The 2.5-litre turbo diesels are common in Japan, although there is a 2.5-litre V6 petrol version available.

The Mazda Bongo Friendee is an eight-seater minivan. Some had Mazda factory-fitted kitchens installed. Many have also been imported to the UK and converted to camper vans. All of them have fold down seats downstairs to make a double bed, and on many models there is also an "Auto Free Top" elevating roof which can sleep two more people. Flat-top versions were also available.

In September 2001, a facelift version appeared with a revised bodystyle and different engines, although the 2.5 turbodiesel continued unchanged. Air conditioning, climate control is fitted as standard and electronic blinds and electric side door are commonly fitted options.