Short description: Process of understanding a complex topic or substance 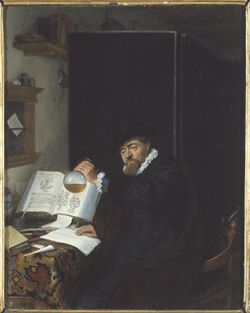 Analysis is the process of breaking a complex topic or substance into smaller parts in order to gain a better understanding of it. The technique has been applied in the study of mathematics and logic since before Aristotle (384–322 B.C.), though analysis as a formal concept is a relatively recent development.[1]

The word comes from the Ancient Greek ἀνάλυσις (analysis, "a breaking-up" or "an untying;" from ana- "up, throughout" and lysis "a loosening").[2] From it also comes the word's plural, analyses.

As a formal concept, the method has variously been ascribed to Alhazen,[3] René Descartes (Discourse on the Method), and Galileo Galilei. It has also been ascribed to Isaac Newton, in the form of a practical method of physical discovery (which he did not name).

The converse of analysis is synthesis: putting the pieces back together again in new or different whole. 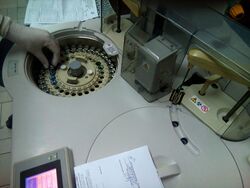 The field of chemistry uses analysis in three ways: to identify the components of a particular chemical compound (qualitative analysis),[4] to identify the proportions of components in a mixture (quantitative analysis),[5] and to break down chemical processes and examine chemical reactions between elements of matter.[6] For an example of its use, analysis of the concentration of elements is important in managing a nuclear reactor, so nuclear scientists will analyze neutron activation to develop discrete measurements within vast samples. A matrix can have a considerable effect on the way a chemical analysis is conducted and the quality of its results. Analysis can be done manually or with a device.

A) Qualitative Analysis: It is concerned with which components are in a given sample or compound.

B) Quantitative Analysis: It is to determine the quantity of individual component present in a given sample or compound.

Example: To find concentration by uv-spectrophotometer.

Chemists can use isotope analysis to assist analysts with issues in anthropology, archeology, food chemistry, forensics, geology, and a host of other questions of physical science. Analysts can discern the origins of natural and man-made isotopes in the study of environmental radioactivity.

Analysts in the field of engineering look at requirements, structures, mechanisms, systems and dimensions. Electrical engineers analyse systems in electronics. Life cycles and system failures are broken down and studied by engineers. It is also looking at different factors incorporated within the design.

Linguistics explores individual languages and language in general. It breaks language down and analyses its component parts: theory, sounds and their meaning, utterance usage, word origins, the history of words, the meaning of words and word combinations, sentence construction, basic construction beyond the sentence level, stylistics, and conversation. It examines the above using statistics and modeling, and semantics. It analyses language in context of anthropology, biology, evolution, geography, history, neurology, psychology, and sociology. It also takes the applied approach, looking at individual language development and clinical issues.

Literary criticism is the analysis of literature. The focus can be as diverse as the analysis of Homer or Freud. While not all literary-critical methods are primarily analytical in nature, the main approach to the teaching of literature in the west since the mid-twentieth century, literary formal analysis or close reading, is. This method, rooted in the academic movement labelled The New Criticism, approaches texts – chiefly short poems such as sonnets, which by virtue of their small size and significant complexity lend themselves well to this type of analysis – as units of discourse that can be understood in themselves, without reference to biographical or historical frameworks. This method of analysis breaks up the text linguistically in a study of prosody (the formal analysis of meter) and phonic effects such as alliteration and rhyme, and cognitively in examination of the interplay of syntactic structures, figurative language, and other elements of the poem that work to produce its larger effects.

The terms synthesis and analysis are used in mathematics in a more special sense than in logic. In ancient mathematics they had a different meaning from what they now have. The oldest definition of mathematical analysis as opposed to synthesis is that given in [appended to] Euclid, XIII. 5, which in all probability was framed by Eudoxus: "Analysis is the obtaining of the thing sought by assuming it and so reasoning up to an admitted truth; synthesis is the obtaining of the thing sought by reasoning up to the inference and proof of it."

The analytic method is not conclusive, unless all operations involved in it are known to be reversible. To remove all doubt, the Greeks, as a rule, added to the analytic process a synthetic one, consisting of a reversion of all operations occurring in the analysis. Thus the aim of analysis was to aid in the discovery of synthetic proofs or solutions.

James Gow uses a similar argument as Cajori, with the following clarification, in his A Short History of Greek Mathematics (1884):

The synthetic proof proceeds by shewing that the proposed new truth involves certain admitted truths. An analytic proof begins by an assumption, upon which a synthetic reasoning is founded. The Greeks distinguished theoretic from problematic analysis. A theoretic analysis is of the following kind. To prove that A is B, assume first that A is B. If so, then, since B is C and C is D and D is E, therefore A is E. If this be known a falsity, A is not B. But if this be a known truth and all the intermediate propositions be convertible, then the reverse process, A is E, E is D, D is C, C is B, therefore A is B, constitutes a synthetic proof of the original theorem. Problematic analysis is applied in all cases where it is proposed to construct a figure which is assumed to satisfy a given condition. The problem is then converted into some theorem which is involved in the condition and which is proved synthetically, and the steps of this synthetic proof taken backwards are a synthetic solution of the problem.

In statistics, the term analysis may refer to any method used for data analysis. Among the many such methods, some are: