A module with two input streams at the top, an AND output bucket in the middle, and an XOR output stream at the bottom.

Fluidics, or fluidic logic, is the use of a fluid to perform analog or digital operations similar to those performed with electronics.

The physical basis of fluidics is pneumatics and hydraulics, based on the theoretical foundation of fluid dynamics. The term fluidics is normally used when devices have no moving parts, so ordinary hydraulic components such as hydraulic cylinders and spool valves are not considered or referred to as fluidic devices.

A jet of fluid can be deflected by a weaker jet striking it at the side. This provides nonlinear amplification, similar to the transistor used in electronic digital logic. It is used mostly in environments where electronic digital logic would be unreliable, as in systems exposed to high levels of electromagnetic interference or ionizing radiation.

Nanotechnology considers fluidics as one of its instruments. In this domain, effects such as fluid–solid and fluid–fluid interface forces are often highly significant. Fluidics have also been used for military applications.

In 1957, Billy M. Horton of the Harry Diamond Laboratories (which later became a part of the Army Research Laboratory) first came up with the idea for the fluidic amplifier when he realized that he could redirect the direction of flue gases using a small bellows.[1] He proposed a theory on stream interaction, stating that one can achieve amplification by deflecting a stream of fluid with a different stream of fluid. In 1959, Horton and his associates, Dr. R. E. Bowles and Ray Warren, constructed a family of working vortex amplifiers out of soap, linoleum, and wood.[2] Their published result caught the attention of several major industries and created a surge of interest in applying fluidics (then called fluid amplification) to sophisticated control systems, which lasted throughout the 1960s.[3][4] Horton is credited for developing the first fluid amplifier control device and launching the field of fluidics.[5] In 1961, Horton, Warren, and Bowles were among the 27 recipients to receive the first Army Research and Development Achievement Award for developing the fluid amplifier control device.[6]

Logic gates can be built that use water instead of electricity to power the gating function. These are reliant on being positioned in one orientation to perform correctly. An OR gate is simply two pipes being merged, and a NOT gate (inverter) consists of "A" deflecting a supply stream to produce Ā. The AND and XOR gates are sketched in the diagram. An inverter could also be implemented with the XOR gate, as A XOR 1 = Ā.[7]

Another kind of fluidic logic is bubble logic. Bubble logic gates conserve the number of bits entering and exiting the device, because bubbles are neither produced nor destroyed in the logic operation, analogous to billiard-ball computer gates.[8] 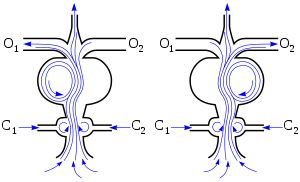 In a fluidic amplifier, a fluid supply, which may be air, water, or hydraulic fluid, enters at the bottom. Pressure applied to the control ports C1 or C2 deflects the stream, so that it exits via either port O1 or O2. The stream entering the control ports may be much weaker than the stream being deflected, so the device has gain.

This basic device can be used to construct other fluidic logic elements, as well fluidic oscillators that can be used in analogous way as flip flops.[9] Simple systems of digital logic can thus be built.

Fluidic amplifiers typically have bandwidths in the low kilohertz range, so systems built from them are quite slow compared to electronic devices.

The fluidic triode is an amplification device that uses a fluid to convey the signal. The fluidic triode was invented in 1962 by Murray O. Meetze, Jr., a high school student in Heath Springs, S.C who also built a fluid diode, a fluid oscillator and a variety of hydraulic "circuits," including one that has no electronic counterpart.[10] Fluidic triodes were used as the final stage in the main Public Address system at the 1964 New York World's Fair.[citation needed]

Although much studied in the laboratory they have few practical applications. Many expect them to be key elements of nanotechnology.

The MONIAC Computer built in 1949 was a fluid-based analogue computer used for teaching economic principles as it could recreate complex simulations that digital computers could not. Twelve to fourteen were built and acquired by businesses and teaching establishments.

The FLODAC Computer was built in 1964 as a proof of concept fluid digital computer.[11]

In the consumer market, fluidically controlled products are increasing in both popularity and presence, installed in items ranging from toy spray guns through shower heads and hot tub jets; all provide oscillating or pulsating streams of air or water.

Fluid logic can be used to create a valve with no moving parts such as in some anaesthetic machines.[12]

Fluidic oscillators were used in the design of pressure-triggered, 3D printable, emergency ventilators for the COVID-19 pandemic.[13] [14] [15]

Fluidic amplifiers are used to generate ultrasound for non-destructive testing by quickly switching pressurized air from one outlet to another. [16]

Fluidic injection is being researched for use in aircraft to control direction, in two ways: circulation control and thrust vectoring. In both, larger more complex mechanical parts are replaced by fluidic systems, in which larger forces in fluids are diverted by smaller jets or flows of fluid intermittently, to change the direction of vehicles. In circulation control, near the trailing edges of wings, aircraft flight control systems such as ailerons, elevators, elevons, flaps and flaperons are replaced by slots which emit fluid flows.[17][18][19] In thrust vectoring, in jet engine nozzles, swiveling parts are replaced by slots which inject fluid flows into jets.[20] Such systems divert thrust via fluid effects. Tests show that air forced into a jet engine exhaust stream can deflect thrust up to 15 degrees.[20] In such uses, fluidics is desirable for lower: mass, cost (up to 50% less), drag (up to 15% less during use), inertia (for faster, stronger control response), complexity (mechanically simpler, fewer or no moving parts or surfaces, less maintenance), and radar cross section for stealth. This will likely be used in many unmanned aerial vehicles (UAVs), 6th generation fighter aircraft, and ships.

BAE Systems has tested two fluidically controlled unmanned aircraft, one starting in 2010 named Demon,[21][22] and another starting in 2017 named MAGMA, with the University of Manchester.[23]