An anaesthetic machine (British English) or anesthesia machine (American English) is a medical device used to generate and mix a fresh gas flow of medical gases and inhalational anaesthetic agents for the purpose of inducing and maintaining anaesthesia.

The machine is commonly used together with a mechanical ventilator, breathing system, suction equipment, and patient monitoring devices; strictly speaking, the term "anaesthetic machine" refers only to the component which generates the gas flow, but modern machines usually integrate all these devices into one combined freestanding unit, which is colloquially referred to as the "anaesthetic machine" for the sake of simplicity. In the developed world, the most frequent type in use is the continuous-flow anaesthetic machine or "Boyle's machine", which is designed to provide an accurate supply of medical gases mixed with an accurate concentration of anaesthetic vapour, and to deliver this continuously to the patient at a safe pressure and flow. This is distinct from intermittent-flow anaesthetic machines, which provide gas flow only on demand when triggered by the patient's own inspiration.

Simpler anaesthetic apparatus may be used in special circumstances, such as the triservice anaesthetic apparatus, a simplified anaesthesia delivery system invented for the British Defence Medical Services, which is light and portable and may be used for ventilation even when no medical gases are available. This device has unidirectional valves which suck in ambient air, which can be enriched with oxygen from a cylinder, with the help of a set of bellows.

The original concept of continuous-flow machines was popularised by Boyle's anaesthetic machine, invented by the British anaesthetist Henry Boyle at St Bartholomew's Hospital in London , United Kingdom in 1917, although similar machines had been in use in France and the United States.[1] Prior to this time, anaesthesiologists often carried all their equipment with them, but the development of heavy, bulky cylinder storage and increasingly elaborate airway equipment meant that this was no longer practical for most circumstances. Contemporary anaesthetic machines are sometimes still referred to metonymously as "Boyle's machine", and are usually mounted on anti-static wheels for convenient transportation.

Many of the early innovations in anaesthetic equipmentin the United States, including the closed circuit carbon-dioxide absorber (a.k.a. the Guedel-Foregger Midget) and diffusion of such equipment to anaesthesiologists within the United States can be attributed to Richard von Foregger and The Foregger Company.

Components of a typical machine 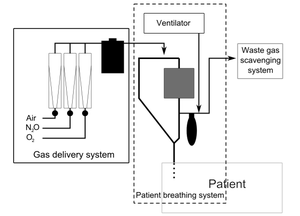 Simple schematic of an anaesthetic machine

A modern anaesthetic machine includes at minimum the following components:[1]

Systems for monitoring the patient's heart rate, ECG, blood pressure and oxygen saturation may be incorporated, in some cases with additional options for monitoring end-tidal carbon dioxide and temperature.[1] Breathing systems are also typically incorporated, including a manual reservoir bag for ventilation in combination with an adjustable pressure-limiting valve, as well as an integrated mechanical ventilator, to accurately ventilate the patient during anaesthesia.[1]

Anaesthetic machines are distinct from anaesthesia carts, which hold various adjuncts for anaesthesia such as intravenous medications, syringes, needles and other items of equipment that the anesthetist providing anaesthesia might need.

In dentistry a simplified version of the anaesthetic machine, without a ventilator or anaesthetic vaporiser, is referred to as a relative analgesia machine. By using this machine, the dentist can administer a mild inhalation sedation with nitrous oxide and oxygen, in order to keep their patient in a conscious state while depressing the feeling of pain.

Based on experience gained from analysis of mishaps, the modern anaesthetic machine incorporates several safety devices, including:

The functions of the machine should be checked at the beginning of every operating list in a "cockpit-drill". Machines and associated equipment must be maintained and serviced regularly.

Older machines may lack some of the safety features and refinements present on newer machines. However, they were designed to be operated without mains electricity, using compressed gas power for the ventilator and suction apparatus. Modern machines often have battery backup, but may fail when this becomes depleted.

The modern anaesthetic machine still retains all the key working principles of the Boyle's machine (a British Oxygen Company trade name) in honour of the British anaesthetist Henry Boyle. In India, however, the trade name 'Boyle' is registered with Boyle HealthCare Pvt. Ltd., Indore MP.

A two-person pre-use check (consisting of an anaesthesiologist and an assistant) of the anaesthetic machine is recommended before each case and has been shown to decrease the risk of 24-hour severe postoperative morbidity and mortality.[2] Various regulatory and professional bodies have formulated checklists for different countries.[3] Machines should be cleaned between cases as they are at considerable risk of contamination with pathogens.[4]