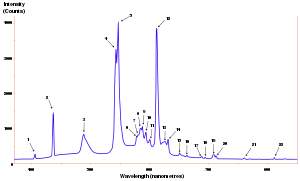 The spectral density of a fluorescent light as a function of optical wavelength shows peaks at atomic transitions, indicated by the numbered arrows.

The voice waveform over time (left) has a broad audio power spectrum (right).

The power spectrum [math]\displaystyle{ S_{xx}(f) }[/math] of a time series [math]\displaystyle{ x(t) }[/math] describes the distribution of power into frequency components composing that signal.[1] According to Fourier analysis, any physical signal can be decomposed into a number of discrete frequencies, or a spectrum of frequencies over a continuous range. The statistical average of a certain signal or sort of signal (including noise) as analyzed in terms of its frequency content, is called its spectrum.

When the energy of the signal is concentrated around a finite time interval, especially if its total energy is finite, one may compute the energy spectral density. More commonly used is the power spectral density (or simply power spectrum), which applies to signals existing over all time, or over a time period large enough (especially in relation to the duration of a measurement) that it could as well have been over an infinite time interval. The power spectral density (PSD) then refers to the spectral energy distribution that would be found per unit time, since the total energy of such a signal over all time would generally be infinite. Summation or integration of the spectral components yields the total power (for a physical process) or variance (in a statistical process), identical to what would be obtained by integrating [math]\displaystyle{ x^2(t) }[/math] over the time domain, as dictated by Parseval's theorem.[1]

The spectrum of a physical process [math]\displaystyle{ x(t) }[/math] often contains essential information about the nature of [math]\displaystyle{ x }[/math]. For instance, the pitch and timbre of a musical instrument are immediately determined from a spectral analysis. The color of a light source is determined by the spectrum of the electromagnetic wave's electric field [math]\displaystyle{ E(t) }[/math] as it fluctuates at an extremely high frequency. Obtaining a spectrum from time series such as these involves the Fourier transform, and generalizations based on Fourier analysis. In many cases the time domain is not specifically employed in practice, such as when a dispersive prism is used to obtain a spectrum of light in a spectrograph, or when a sound is perceived through its effect on the auditory receptors of the inner ear, each of which is sensitive to a particular frequency.

However this article concentrates on situations in which the time series is known (at least in a statistical sense) or directly measured (such as by a microphone sampled by a computer). The power spectrum is important in statistical signal processing and in the statistical study of stochastic processes, as well as in many other branches of physics and engineering. Typically the process is a function of time, but one can similarly discuss data in the spatial domain being decomposed in terms of spatial frequency.[1]

Any signal that can be represented as a variable that varies in time has a corresponding frequency spectrum. This includes familiar entities such as visible light (perceived as color), musical notes (perceived as pitch), radio/TV (specified by their frequency, or sometimes wavelength) and even the regular rotation of the earth. When these signals are viewed in the form of a frequency spectrum, certain aspects of the received signals or the underlying processes producing them are revealed. In some cases the frequency spectrum may include a distinct peak corresponding to a sine wave component. And additionally there may be peaks corresponding to harmonics of a fundamental peak, indicating a periodic signal which is not simply sinusoidal. Or a continuous spectrum may show narrow frequency intervals which are strongly enhanced corresponding to resonances, or frequency intervals containing almost zero power as would be produced by a notch filter.

When a signal is defined in terms only of a voltage, for instance, there is no unique power associated with the stated amplitude. In this case "power" is simply reckoned in terms of the square of the signal, as this would always be proportional to the actual power delivered by that signal into a given impedance. So one might use units of V2 Hz−1 for the PSD. Energy spectral density (ESD) would have units would be V2 s Hz−1, since energy has units of power multiplied by time (e.g., watt-hour).[3]

Sometimes one encounters an amplitude spectral density (ASD), which is the square root of the PSD; the ASD of a voltage signal has units of V Hz−1/2.[4] This is useful when the shape of the spectrum is rather constant, since variations in the ASD will then be proportional to variations in the signal's voltage level itself. But it is mathematically preferred to use the PSD, since only in that case is the area under the curve meaningful in terms of actual power over all frequency or over a specified bandwidth.

In the general case, the units of PSD will be the ratio of units of variance per unit of frequency; so, for example, a series of displacement values (in meters) over time (in seconds) will have PSD in units of meters squared per hertz, m2/Hz. In the analysis of random vibrations, units of g2 Hz−1 are frequently used for the PSD of acceleration, where g denotes the g-force.[5]

The energy spectral density is most suitable for transients—that is, pulse-like signals—having a finite total energy. Finite or not, Parseval's theorem[7] (or Plancherel's theorem) gives us an alternate expression for the energy of the signal:

The above definition of energy spectral density is suitable for transients (pulse-like signals) whose energy is concentrated around one time window; then the Fourier transforms of the signals generally exist. For continuous signals over all time, one must rather define the power spectral density (PSD) which exists for stationary processes; this describes how power of a signal or time series is distributed over frequency, as in the simple example given previously. Here, power can be the actual physical power, or more often, for convenience with abstract signals, is simply identified with the squared value of the signal. For example, statisticians study the variance of a function over time [math]\displaystyle{ x(t) }[/math] (or over another independent variable), and using an analogy with electrical signals (among other physical processes), it is customary to refer to it as the power spectrum even when there is no physical power involved. If one were to create a physical voltage source which followed [math]\displaystyle{ x(t) }[/math] and applied it to the terminals of a 1 ohm resistor, then indeed the instantaneous power dissipated in that resistor would be given by [math]\displaystyle{ x(t)^2 }[/math] watts.

However, for the sake of dealing with the math that follows, it is more convenient to deal with time limits in the signal itself rather than time limits in the bounds of the integral. As such, we have an alternative representation of the average power, where [math]\displaystyle{ x_{T}(t) = x(t)w_{T}(t) }[/math] and [math]\displaystyle{ w_{T}(t) }[/math] is unity within the arbitrary period and zero elsewhere.

Clearly in cases where the above expression for P is non-zero (even as T grows without bound) the integral itself must also grow without bound. That is the reason that we cannot use the energy spectral density itself, which is that diverging integral, in such cases.

Then the power spectral density is simply defined as the integrand above.[9][10]

From here we see, again assuming the ergodicity of [math]\displaystyle{ x(t) }[/math], that the power spectral density can be found as the Fourier transform of the autocorrelation function (Wiener–Khinchin theorem).

Many authors use this equality to actually define the power spectral density.[12]

More generally, similar techniques may be used to estimate a time-varying spectral density. In this case the time interval [math]\displaystyle{ T }[/math] is finite rather than approaching infinity. This results in decreased spectral coverage and resolution since frequencies of less than [math]\displaystyle{ 1/T }[/math] are not sampled, and results at frequencies which are not an integer multiple of [math]\displaystyle{ 1/T }[/math] are not independent. Just using a single such time series, the estimated power spectrum will be very "noisy"; however this can be alleviated if it is possible to evaluate the expected value (in the above equation) using a large (or infinite) number of short-term spectra corresponding to statistical ensembles of realizations of [math]\displaystyle{ x(t) }[/math] evaluated over the specified time window.

Note that a single estimate of the PSD can be obtained through a finite number of samplings. As before, the actual PSD is achieved when [math]\displaystyle{ N }[/math] (and thus [math]\displaystyle{ T }[/math]) approaches infinity and the expected value is formally applied. In a real-world application, one would typically average a finite-measurement PSD over many trials to obtain a more accurate estimate of the theoretical PSD of the physical process underlying the individual measurements. This computed PSD is sometimes called a periodogram. This periodogram converges to the true PSD as the number of estimates as well as the averaging time interval [math]\displaystyle{ T }[/math] approach infinity (Brown & Hwang).[13]

Properties of the power spectral density

Some properties of the PSD include:[14]

Using the same notation and methods as used for the power spectral density derivation, we exploit Parseval's theorem and obtain

For discrete signals xn and yn, the relationship between the cross-spectral density and the cross-covariance is

The goal of spectral density estimation is to estimate the spectral density of a random signal from a sequence of time samples. Depending on what is known about the signal, estimation techniques can involve parametric or non-parametric approaches, and may be based on time-domain or frequency-domain analysis. For example, a common parametric technique involves fitting the observations to an autoregressive model. A common non-parametric technique is the periodogram.

The spectral density is usually estimated using Fourier transform methods (such as the Welch method), but other techniques such as the maximum entropy method can also be used.

Spectrogram of an FM radio signal with frequency on the horizontal axis and time increasing upwards on the vertical axis.

The concept and use of the power spectrum of a signal is fundamental in electrical engineering, especially in electronic communication systems, including radio communications, radars, and related systems, plus passive remote sensing technology. Electronic instruments called spectrum analyzers are used to observe and measure the power spectra of signals.

The spectrum analyzer measures the magnitude of the short-time Fourier transform (STFT) of an input signal. If the signal being analyzed can be considered a stationary process, the STFT is a good smoothed estimate of its power spectral density.

Primordial fluctuations, density variations in the early universe, are quantified by a power spectrum which gives the power of the variations as a function of spatial scale.