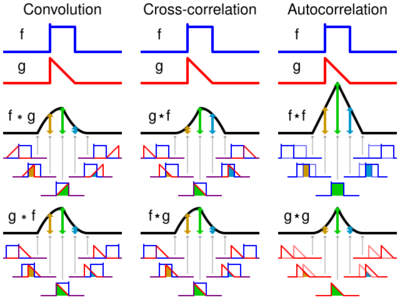 Visual comparison of convolution, cross-correlation, and autocorrelation. For the operations involving function f, and assuming the height of f is 1.0, the value of the result at 5 different points is indicated by the shaded area below each point. The symmetry of f is the reason [math]\displaystyle{ f*g }[/math] and [math]\displaystyle{ f \star g }[/math] are identical in this example.

In mathematics (in particular, functional analysis), convolution is a mathematical operation on two functions (f and g) that produces a third function ([math]\displaystyle{ f*g }[/math]) that expresses how the shape of one is modified by the other. The term convolution refers to both the result function and to the process of computing it. It is defined as the integral of the product of the two functions after one is reflected about the y-axis and shifted. The choice of which function is reflected and shifted before the integral does not change the integral result (see commutativity). The integral is evaluated for all values of shift, producing the convolution function.

Generalizations of convolution have applications in the field of numerical analysis and numerical linear algebra, and in the design and implementation of finite impulse response filters in signal processing.

Computing the inverse of the convolution operation is known as deconvolution.

The convolution of f and g is written f∗g, denoting the operator with the symbol ∗.[upper-alpha 2] It is defined as the integral of the product of the two functions after one is reflected about the y-axis and shifted. As such, it is a particular kind of integral transform:

An equivalent definition is (see commutativity):

For functions f, g supported on only [0, ∞] (i.e., zero for negative arguments), the integration limits can be truncated, resulting in:

For the multi-dimensional formulation of convolution, see domain of definition (below).

A common engineering notational convention is:[2]

Relations with other transforms

One of the earliest uses of the convolution integral appeared in D'Alembert's derivation of Taylor's theorem in Recherches sur différents points importants du système du monde, published in 1754.[6]

Also, an expression of the type:

is used by Sylvestre François Lacroix on page 505 of his book entitled Treatise on differences and series, which is the last of 3 volumes of the encyclopedic series: Traité du calcul différentiel et du calcul intégral, Chez Courcier, Paris, 1797–1800.[7] Soon thereafter, convolution operations appear in the works of Pierre Simon Laplace, Jean-Baptiste Joseph Fourier, Siméon Denis Poisson, and others. The term itself did not come into wide use until the 1950s or 60s. Prior to that it was sometimes known as Faltung (which means folding in German), composition product, superposition integral, and Carson's integral.[8] Yet it appears as early as 1903, though the definition is rather unfamiliar in older uses.[9][10]

is a particular case of composition products considered by the Italian mathematician Vito Volterra in 1913.[11]

When a function gT is periodic, with period T, then for functions, f, such that f ∗ gT exists, the convolution is also periodic and identical to:

where t0 is an arbitrary choice. The summation is called a periodic summation of the function f.

When gT is a periodic summation of another function, g, then f ∗ gT is known as a circular or cyclic convolution of f and g.

And if the periodic summation above is replaced by fT, the operation is called a periodic convolution of fT and gT.

For complex-valued functions f, g defined on the set Z of integers, the discrete convolution of f and g is given by:[12]

or equivalently (see commutativity) by:

When a function gN is periodic, with period N, then for functions, f, such that f∗gN exists, the convolution is also periodic and identical to:

If gN is a periodic summation of another function, g, then f∗gN is known as a circular convolution of f and g.

When the non-zero durations of both f and g are limited to the interval [0, N − 1],  f∗gN reduces to these common forms:

Circular convolution arises most often in the context of fast convolution with a fast Fourier transform (FFT) algorithm.

In many situations, discrete convolutions can be converted to circular convolutions so that fast transforms with a convolution property can be used to implement the computation. For example, convolution of digit sequences is the kernel operation in multiplication of multi-digit numbers, which can therefore be efficiently implemented with transform techniques (Knuth 1997, §4.3.3.C; von zur Gathen & Gerhard 2003, §8.2).

Eq.1 requires N arithmetic operations per output value and N2 operations for N outputs. That can be significantly reduced with any of several fast algorithms. Digital signal processing and other applications typically use fast convolution algorithms to reduce the cost of the convolution to O(N log N) complexity.

The most common fast convolution algorithms use fast Fourier transform (FFT) algorithms via the circular convolution theorem. Specifically, the circular convolution of two finite-length sequences is found by taking an FFT of each sequence, multiplying pointwise, and then performing an inverse FFT. Convolutions of the type defined above are then efficiently implemented using that technique in conjunction with zero-extension and/or discarding portions of the output. Other fast convolution algorithms, such as the Schönhage–Strassen algorithm or the Mersenne transform,[14] use fast Fourier transforms in other rings.

If one sequence is much longer than the other, zero-extension of the shorter sequence and fast circular convolution is not the most computationally efficient method available.[15] Instead, decomposing the longer sequence into blocks and convolving each block allows for faster algorithms such as the overlap–save method and overlap–add method.[16] A hybrid convolution method that combines block and FIR algorithms allows for a zero input-output latency that is useful for real-time convolution computations.[17]

Convolution of f and g is also well defined when both functions are locally square integrable on R and supported on an interval of the form [a, +∞) (or both supported on [−∞, a]).

In the particular case p = 1, this shows that L1 is a Banach algebra under the convolution (and equality of the two sides holds if f and g are non-negative almost everywhere).

In addition to compactly supported functions and integrable functions, functions that have sufficiently rapid decay at infinity can also be convolved. An important feature of the convolution is that if f and g both decay rapidly, then f∗g also decays rapidly. In particular, if f and g are rapidly decreasing functions, then so is the convolution f∗g. Combined with the fact that convolution commutes with differentiation (see #Properties), it follows that the class of Schwartz functions is closed under convolution (Stein Weiss).

More generally, it is possible to extend the definition of the convolution in a unique way so that the associative law

remains valid in the case where f is a distribution, and g a compactly supported distribution (Hörmander 1983).

The convolution defines a product on the linear space of integrable functions. This product satisfies the following algebraic properties, which formally mean that the space of integrable functions with the product given by convolution is a commutative associative algebra without identity (Strichartz 1994). Other linear spaces of functions, such as the space of continuous functions of compact support, are closed under the convolution, and so also form commutative associative algebras.

If f and g are integrable functions, then the integral of their convolution on the whole space is simply obtained as the product of their integrals:[21]

This follows from Fubini's theorem. The same result holds if f and g are only assumed to be nonnegative measurable functions, by Tonelli's theorem.

In the one-variable case,

where d/dx is the derivative. More generally, in the case of functions of several variables, an analogous formula holds with the partial derivative:

A particular consequence of this is that the convolution can be viewed as a "smoothing" operation: the convolution of f and g is differentiable as many times as f and g are in total.

These identities hold under the precise condition that f and g are absolutely integrable and at least one of them has an absolutely integrable (L1) weak derivative, as a consequence of Young's convolution inequality. For instance, when f is continuously differentiable with compact support, and g is an arbitrary locally integrable function,

The convolution theorem states that

On the other hand, if [math]\displaystyle{ \mathcal W }[/math] is the Fourier transform matrix, then

The convolution commutes with translations, meaning that

Suppose that S is a bounded linear operator acting on functions which commutes with translations: S(τxf) = τx(Sf) for all x. Then S is given as convolution with a function (or distribution) gS; that is Sf = gS ∗ f.

Thus some translation invariant operations can be represented as convolution. Convolutions play an important role in the study of time-invariant systems, and especially LTI system theory. The representing function gS is the impulse response of the transformation S.

If G is a suitable group endowed with a measure λ, and if f and g are real or complex valued integrable functions on G, then we can define their convolution by

It is not commutative in general. In typical cases of interest G is a locally compact Hausdorff topological group and λ is a (left-) Haar measure. In that case, unless G is unimodular, the convolution defined in this way is not the same as [math]\displaystyle{ \int f\left(xy^{-1}\right)g(y) \, d\lambda(y) }[/math]. The preference of one over the other is made so that convolution with a fixed function g commutes with left translation in the group:

Furthermore, the convention is also required for consistency with the definition of the convolution of measures given below. However, with a right instead of a left Haar measure, the latter integral is preferred over the former.

The operator T is compact. A direct calculation shows that its adjoint T* is convolution with

which are precisely the characters of T. Each convolution is a compact multiplication operator in this basis. This can be viewed as a version of the convolution theorem discussed above.

A discrete example is a finite cyclic group of order n. Convolution operators are here represented by circulant matrices, and can be diagonalized by the discrete Fourier transform.

A similar result holds for compact groups (not necessarily abelian): the matrix coefficients of finite-dimensional unitary representations form an orthonormal basis in L2 by the Peter–Weyl theorem, and an analog of the convolution theorem continues to hold, along with many other aspects of harmonic analysis that depend on the Fourier transform.

Let G be a (multiplicatively written) topological group. If μ and ν are finite Borel measures on G, then their convolution μ∗ν is defined as the pushforward measure of the group action and can be written as

for each measurable subset E of G. The convolution is also a finite measure, whose total variation satisfies

If μ and ν are probability measures on the topological group (R,+), then the convolution μ∗ν is the probability distribution of the sum X + Y of two independent random variables X and Y whose respective distributions are μ and ν.

Let (X, Δ, ∇, ε, η) be a bialgebra with comultiplication Δ, multiplication ∇, unit η, and counit ε. The convolution is a product defined on the endomorphism algebra End(X) as follows. Let φ, ψ ∈ End(X), that is, φ, ψ: X → X are functions that respect all algebraic structure of X, then the convolution φ∗ψ is defined as the composition

The convolution appears notably in the definition of Hopf algebras (Kassel 1995). A bialgebra is a Hopf algebra if and only if it has an antipode: an endomorphism S such that 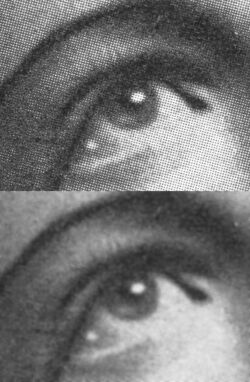 Gaussian blur can be used to obtain a smooth grayscale digital image of a halftone print.

Convolution and related operations are found in many applications in science, engineering and mathematics.