Some SDE techniques assume that a signal is composed of a limited (usually small) number of generating frequencies plus noise and seek to find the location and intensity of the generated frequencies. Others make no assumption on the number of components and seek to estimate the whole generating spectrum.

Example of voice waveform and its frequency spectrum 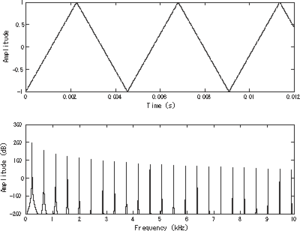 A periodic waveform (triangle wave) and its frequency spectrum, showing a "fundamental" frequency at 220 Hz followed by multiples (harmonics) of 220 Hz.

The power spectral density of a segment of music is estimated by two different methods, for comparison.

Spectrum analysis, also referred to as frequency domain analysis or spectral density estimation, is the technical process of decomposing a complex signal into simpler parts. As described above, many physical processes are best described as a sum of many individual frequency components. Any process that quantifies the various amounts (e.g. amplitudes, powers, intensities) versus frequency (or phase) can be called spectrum analysis.

Spectrum analysis can be performed on the entire signal. Alternatively, a signal can be broken into short segments (sometimes called frames), and spectrum analysis may be applied to these individual segments. Periodic functions (such as [math]\displaystyle{ \sin (t) }[/math]) are particularly well-suited for this sub-division. General mathematical techniques for analyzing non-periodic functions fall into the category of Fourier analysis.

The Fourier transform of a function produces a frequency spectrum which contains all of the information about the original signal, but in a different form. This means that the original function can be completely reconstructed (synthesized) by an inverse Fourier transform. For perfect reconstruction, the spectrum analyzer must preserve both the amplitude and phase of each frequency component. These two pieces of information can be represented as a 2-dimensional vector, as a complex number, or as magnitude (amplitude) and phase in polar coordinates (i.e., as a phasor). A common technique in signal processing is to consider the squared amplitude, or power; in this case the resulting plot is referred to as a power spectrum.

Because of reversibility, the Fourier transform is called a representation of the function, in terms of frequency instead of time; thus, it is a frequency domain representation. Linear operations that could be performed in the time domain have counterparts that can often be performed more easily in the frequency domain. Frequency analysis also simplifies the understanding and interpretation of the effects of various time-domain operations, both linear and non-linear. For instance, only non-linear or time-variant operations can create new frequencies in the frequency spectrum.

In practice, nearly all software and electronic devices that generate frequency spectra utilize a discrete Fourier transform (DFT), which operates on samples of the signal, and which provides a mathematical approximation to the full integral solution. The DFT is almost invariably implemented by an efficient algorithm called fast Fourier transform (FFT). The array of squared-magnitude components of a DFT is a type of power spectrum called periodogram, which is widely used for examining the frequency characteristics of noise-free functions such as filter impulse responses and window functions. But the periodogram does not provide processing-gain when applied to noiselike signals or even sinusoids at low signal-to-noise ratios. In other words, the variance of its spectral estimate at a given frequency does not decrease as the number of samples used in the computation increases. This can be mitigated by averaging over time (Welch's method[2])  or over frequency (smoothing). Welch's method is widely used for spectral density estimation (SDE). However, periodogram-based techniques introduce small biases that are unacceptable in some applications. So other alternatives are presented in the next section.

Many other techniques for spectral estimation have been developed to mitigate the disadvantages of the basic periodogram. These techniques can generally be divided into non-parametric, parametric, and more recently semi-parametric (also called sparse) methods.[3] The non-parametric approaches explicitly estimate the covariance or the spectrum of the process without assuming that the process has any particular structure. Some of the most common estimators in use for basic applications (e.g. Welch's method) are non-parametric estimators closely related to the periodogram. By contrast, the parametric approaches assume that the underlying stationary stochastic process has a certain structure that can be described using a small number of parameters (for example, using an auto-regressive or moving average model). In these approaches, the task is to estimate the parameters of the model that describes the stochastic process. When using the semi-parametric methods, the underlying process is modeled using a non-parametric framework, with the additional assumption that the number of non-zero components of the model is small (i.e., the model is sparse). Similar approaches may also be used for missing data recovery [4] as well as signal reconstruction.

And finally some examples of semi-parametric techniques:

If one wants to know all the (possibly complex) frequency components of a received signal (including transmitted signal and noise), one uses a multiple-tone approach.

The variance of [math]\displaystyle{ x_n }[/math] is, for a zero-mean function as above, given by

If these data were samples taken from an electrical signal, this would be its average power (power is energy per unit time, so it is analogous to variance if energy is analogous to the amplitude squared).

Now, for simplicity, suppose the signal extends infinitely in time, so we pass to the limit as [math]\displaystyle{ N\to \infty. }[/math] If the average power is bounded, which is almost always the case in reality, then the following limit exists and is the variance of the data.

Again, for simplicity, we will pass to continuous time, and assume that the signal extends infinitely in time in both directions. Then these two formulas become