Short description: A range finding device that uses a laser beam to determine the distance to an object 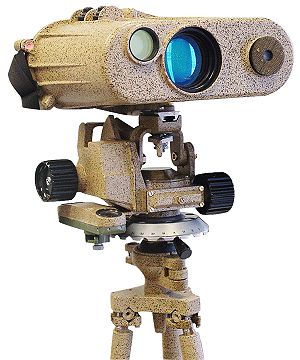 A long range laser rangefinder is capable of measuring distance up to 20 km; mounted on a tripod with an angular mount. The resulting system also provides azimuth and elevation measurements.

A laser rangefinder, also known as a laser telemeter, is a rangefinder that uses a laser beam to determine the distance to an object. The most common form of laser rangefinder operates on the time of flight principle by sending a laser pulse in a narrow beam towards the object and measuring the time taken by the pulse to be reflected off the target and returned to the sender. Due to the high speed of light, this technique is not appropriate for high precision sub-millimeter measurements, where triangulation and other techniques are often used.

The pulse may be coded to reduce the chance that the rangefinder can be jammed. It is possible to use Doppler effect techniques to judge whether the object is moving towards or away from the rangefinder, and if so, how fast.

The precision of the instrument is determined by the rise or fall time of the laser pulse and the speed of the receiver. One that uses very sharp laser pulses and has a very fast detector can range an object to within a few millimeters.

Despite the beam being narrow, it will eventually spread over long distances due to the divergence of the laser beam, as well as due to scintillation and beam wander effects, caused by the presence of air bubbles in the air acting as lenses ranging in size from microscopic to roughly half the height of the laser beam's path above the earth.

These atmospheric distortions coupled with the divergence of the laser itself and with transverse winds that serve to push the atmospheric heat bubbles laterally may combine to make it difficult to get an accurate reading of the distance of an object, say, beneath some trees or behind bushes, or even over long distances of more than 1 km in open and unobscured desert terrain.

Some of the laser light might reflect off leaves or branches which are closer than the object, giving an early return and a reading which is too low. Alternatively, over distances longer than 1200 ft (365 m), the target, if in proximity to the earth, may simply vanish into a mirage, caused by temperature gradients in the air in proximity to the heated surface bending the laser light. All these effects have to be taken into account.

The distance between point A and B is given by

where c is the speed of light and t is the amount of time for the round-trip between A and B.

where φ is the phase delay made by the light traveling and ω is the angular frequency of optical wave.

Then substituting the values in the equation,

In this equation, λ is the wavelength c/f; Δφ is the part of the phase delay that does not fulfill π (that is, φ modulo π); N is the integer number of wave half-cycles of the round-trip and ΔN the remaining fractional part.

Time of flight - this measures the time taken for a light pulse to travel to the target and back. With the speed of light known, and an accurate measurement of the time taken, the distance can be calculated. Many pulses are fired sequentially and the average response is most commonly used. This technique requires very accurate sub-nanosecond timing circuitry.

Multiple frequency phase-shift - this measures the phase shift of multiple frequencies on reflection then solves some simultaneous equations to give a final measure.

Interferometry - the most accurate and most useful technique for measuring changes in distance rather than absolute distances.

An American soldier with a GVS-5 laser rangefinder

Rangefinders provide an exact distance to targets located beyond the distance of point-blank shooting to snipers and artillery. They can also be used for military reconnaissance and engineering.

Handheld military rangefinders operate at ranges of 2 km up to 25 km and are combined with binoculars or monoculars. When the rangefinder is equipped with a digital magnetic compass (DMC) and inclinometer it is capable of providing magnetic azimuth, inclination, and height (length) of targets. Some rangefinders can also measure a target's speed in relation to the observer. Some rangefinders have cable or wireless interfaces to enable them to transfer their measurement(s) data to other equipment like fire control computers. Some models also offer the possibility to use add-on night vision modules. Most handheld rangefinders use standard or rechargeable batteries. 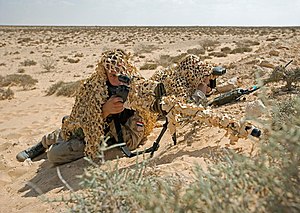 The more powerful models of rangefinders measure distance up to 25 km and are normally installed either on a tripod or directly on a vehicle or gun platform. In the latter case the rangefinder module is integrated with on-board thermal, night vision and daytime observation equipment. The most advanced military rangefinders can be integrated with computers.

To make laser rangefinders and laser-guided weapons less useful against military targets, various military arms may have developed laser-absorbing paint for their vehicles. Regardless, some objects don't reflect laser light very well and using a laser rangefinder on them is difficult.

The first commercial laser rangefinder was the Barr & Stroud LF1, developed in association with Hughes Aircraft, which became available in 1965. This was then followed by the Barr & Stroud LF2, which integrated the rangefinder into a tank sight, and this was used on the Chieftain tank in 1969, the first vehicle so-equipped with such a system. Both systems used ruby lasers.[2]

This LIDAR scanner may be used to scan buildings, rock formations, etc., to produce a 3D model. The LIDAR can aim its laser beam in a wide range: its head rotates horizontally, a mirror flips vertically. The laser beam is used to measure the distance to the first object on its path.

Laser rangefinders are used extensively in 3-D object recognition, 3-D object modelling, and a wide variety of computer vision-related fields. This technology constitutes the heart of the so-called time-of-flight 3D scanners. In contrast to the military instruments described above, laser rangefinders offer high-precision scanning abilities, with either single-face or 360-degree scanning modes.

A number of algorithms have been developed to merge the range data retrieved from multiple angles of a single object to produce complete 3-D models with as little error as possible. One of the advantages that laser rangefinders offer over other methods of computer vision is that the computer does not need to correlate features from two images to determine depth information as in stereoscopic methods.

Laser rangefinders used in computer vision applications often have depth resolutions of tenths of millimeters or less. This can be achieved by using triangulation or refraction measurement techniques as opposed to the time of flight techniques used in LIDAR. 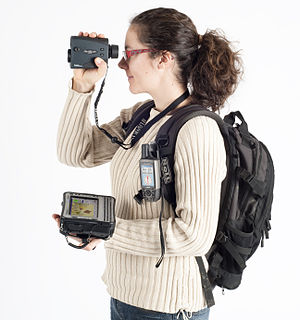 Laser rangefinders may be effectively used in various sports that require precision distance measurement, such as golf, hunting, and archery. Some of the more popular manufacturers are Caddytalk, Opti-logic Corporation, Bushnell, Leupold, LaserTechnology, Trimble, Leica, Newcon Optik, Op. Electronics, Nikon, Swarovski Optik and Zeiss. Many rangefinders from Bushnell come with advanced features, such as ARC (angle range compensation), multi-distance ability, slope, JOLT (Vibrate when the target is locked), and Pin-Seeking. ARC can be calculated by hand using the rifleman's rule, but it's usually much easier if you let a rangefinder do it when you are out hunting. In golfing where time is most important, a laser rangefinder comes useful in locating distance to the flag. However not all features are 100% legal for golf tournament play.[3] Many hunters in the eastern U.S. don't need a rangefinder, although many western hunters need them, due to longer shooting distances and more open spaces.

An important application is the use of laser rangefinder technology during the automation of stock management systems and production processes in steel industry. 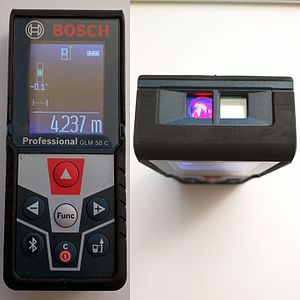 Laser rangefinders are also used in several industries like construction, renovation and real estate as an alternative to a tape measure, and was first introduced by Leica Geosystems in 1993 in France . To measure a large object like a room with a tape measure, one would need another person to hold the tape at the far wall and a clear line straight across the room to stretch the tape. With a laser measuring tool, the job can be completed by one operator with just a line of sight. Although the tape measure is typically more accurate, laser measuring tools can be calibrated to be generally reliable when taking several measurements. Laser measuring tools typically include the ability to produce some simple calculations, such as the area or volume of a room, as well as switch between imperial and metric units. These devices can be found in hardware stores and online marketplaces.

Laser rangefinders can vary in price, depending on the quality and application of the product. Military grade rangefinders need to be as accurate as possible and must also reach great distances. These devices can cost hundreds of thousands of dollars. For civilian applications, such as hunting or golf, devices are more affordable and much more readily accessible.[4]