Short description: Branch of atmospheric science in which the chemistry of the atmosphere is studied
This page is about field of academic study. For composition of the Earth's atmosphere, see Atmosphere of Earth.

Atmospheric chemistry is a branch of atmospheric science in which the chemistry of the Earth's atmosphere and that of other planets is studied. It is a multidisciplinary approach of research and draws on environmental chemistry, physics, meteorology, computer modeling, oceanography, geology and volcanology and other disciplines. Research is increasingly connected with other areas of study such as climatology.

The composition and chemistry of the Earth's atmosphere is of importance for several reasons, but primarily because of the interactions between the atmosphere and living organisms. The composition of the Earth's atmosphere changes as result of natural processes such as volcano emissions, lightning and bombardment by solar particles from corona. It has also been changed by human activity and some of these changes are harmful to human health, crops and ecosystems. Examples of problems which have been addressed by atmospheric chemistry include acid rain, ozone depletion, photochemical smog, greenhouse gases and global warming. Atmospheric chemists seek to understand the causes of these problems, and by obtaining a theoretical understanding of them, allow possible solutions to be tested and the effects of changes in government policy evaluated.

Visualisation of composition by volume of Earth's atmosphere. Water vapour is not included as it is highly variable. Each tiny cube (such as the one representing krypton) has one millionth of the volume of the entire block. Data is from NASA Langley.

Chemical composition of atmosphere according to altitude.[1] Axis: Altitude (km), Content of volume (%).

Besides the more major components listed above, Earth's atmosphere also has many trace gas species that vary significantly depending on nearby sources and sinks. These trace gases can include compounds such as CFCs/HCFCs which are particularly damaging to the ozone layer, and H2S which has a characteristic foul odor of rotten eggs and can be smelt in concentrations as low as 0.47 ppb. Some approximate amounts near the surface of some additional gases are listed below. In addition to gases, the atmosphere contains particulates as aerosol, which includes for example droplets, ice crystals, bacteria, and dust.

Schematic of chemical and transport processes related to atmospheric composition

The ancient Greeks regarded air as one of the four elements. The first scientific studies of atmospheric composition began in the 18th century, as chemists such as Joseph Priestley, Antoine Lavoisier and Henry Cavendish made the first measurements of the composition of the atmosphere.

In the late 19th and early 20th centuries interest shifted towards trace constituents with very small concentrations. One particularly important discovery for atmospheric chemistry was the discovery of ozone by Christian Friedrich Schönbein in 1840.

In the 20th century atmospheric science moved on from studying the composition of air to a consideration of how the concentrations of trace gases in the atmosphere have changed over time and the chemical processes which create and destroy compounds in the air. Two particularly important examples of this were the explanation by Sydney Chapman and Gordon Dobson of how the ozone layer is created and maintained, and the explanation of photochemical smog by Arie Jan Haagen-Smit. Further studies on ozone issues led to the 1995 Nobel Prize in Chemistry award shared between Paul Crutzen, Mario Molina and Frank Sherwood Rowland.[4]

In the 21st century the focus is now shifting again. Atmospheric chemistry is increasingly studied as one part of the Earth system. Instead of concentrating on atmospheric chemistry in isolation the focus is now on seeing it as one part of a single system with the rest of the atmosphere, biosphere and geosphere. An especially important driver for this is the links between chemistry and climate such as the effects of changing climate on the recovery of the ozone hole and vice versa but also interaction of the composition of the atmosphere with the oceans and terrestrial ecosystems.

Carbon dioxide in Earth's atmosphere if half of anthropogenic CO2 emissions[5][6] are not absorbed
(NASA simulation; 9 November 2015) 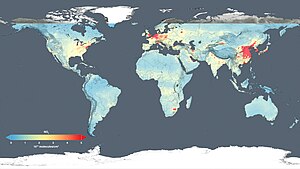 Observations, lab measurements, and modeling are the three central elements in atmospheric chemistry. Progress in atmospheric chemistry is often driven by the interactions between these components and they form an integrated whole. For example, observations may tell us that more of a chemical compound exists than previously thought possible. This will stimulate new modelling and laboratory studies which will increase our scientific understanding to a point where the observations can be explained.

Measurements made in the laboratory are essential to our understanding of the sources and sinks of pollutants and naturally occurring compounds. These experiments are performed in controlled environments that allow for the individual evaluation of specific chemical reactions or the assessment of properties of a particular atmospheric constituent.[8] Types of analysis that are of interest includes both those on gas-phase reactions, as well as heterogeneous reactions that are relevant to the formation and growth of aerosols. Also of high importance is the study of atmospheric photochemistry which quantifies how the rate in which molecules are split apart by sunlight and what resulting products are. In addition, thermodynamic data such as Henry's law coefficients can also be obtained.

Some models are constructed by automatic code generators (e.g. Autochem or Kinetic PreProcessor). In this approach a set of constituents are chosen and the automatic code generator will then select the reactions involving those constituents from a set of reaction databases. Once the reactions have been chosen the ordinary differential equations that describe their time evolution can be automatically constructed.