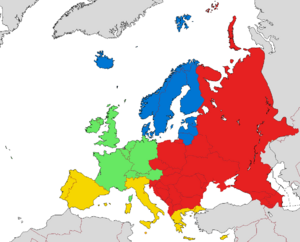 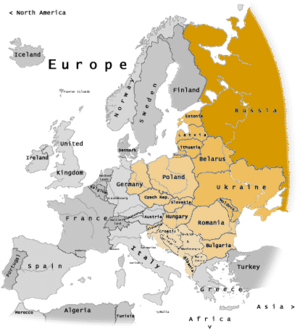 Central and Eastern Europe is a term encompassing the countries in the Baltics, Central Europe, Eastern Europe and Southeast Europe (mostly the Balkans), usually meaning former communist states from the Eastern Bloc and Warsaw Pact in Europe. Scholarly literature often uses the abbreviations CEE or CEEC for this term.[1][2][3] The Organisation for Economic Co-operation and Development (OECD) also uses the term "Central and Eastern European Countries (CEECs)" for a group comprising some of these countries.

The term CEE includes the Eastern Bloc (Warsaw Pact) countries west of the post-World War II border with the former Soviet Union; the independent states in former Yugoslavia (which were not considered part of the Eastern bloc); and the two Baltic states – Latvia, Lithuania (which chose not to join the CIS with the other 12 former republics of the USSR).

The CEE countries include the former socialist states, which extend east of Austria, Germany (western part), and Italy; north of Greece and Turkey (European part); Estonia, south of Finland and Sweden; and west of Belarus , Moldova, Russia , and Ukraine :

According to the Organisation for Economic Co-operation and Development, "Central and Eastern European Countries (CEECs) is an OECD term for the group of countries comprising Albania, Bulgaria, Croatia, the Czech Republic, Hungary, Poland, Romania, the Slovak Republic, Slovenia, and the three Baltic States: Estonia, Latvia and Lithuania."[6]

The term Central and Eastern Europe (abbreviated CEE) has displaced the alternative term East-Central Europe in the context of transition countries, mainly because the abbreviation ECE is ambiguous: it commonly stands for Economic Commission for Europe, rather than East-Central Europe.[8]