The game engine was originally employed in the Battlefield video game series, but would later be expanded to other first-person shooter video games and a variety of other genres. To date, Frostbite has been exclusive to video games published by Electronic Arts. 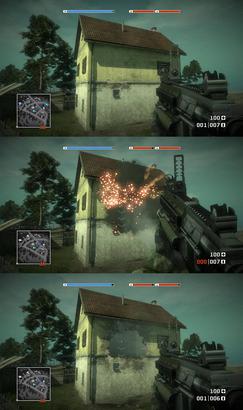 Destruction in Battlefield on Frostbite 1

The first iteration of the Frostbite game engine made its debut in the 2008 video game, Battlefield.[1] The engine was developed with an HDR Audio and Destruction 1.0. HDR Audio allowed differing sound levels to be perceived by the player whilst Destruction 1.0 allowed players to destroy the environment.[2] A newer version of Frostbite would later be employed in Battlefield 1943 (2009) and Battlefield (2010), which would come to be known as Frostbite 1.5.[3][4] In the upgraded game engine, it was now possible for players to cause enough destruction to entirely demolish structures.[5] This version was also employed in the multiplayer aspect of Medal of Honor (2010), becoming the first video game outside of the Battlefield series to run on Frostbite.[6]

On 25 October 2011, Frostbite 2 made its debut in Battlefield 3. Also making its debut was Destruction 3.0, which made falling debris potentially lethal to the player. Further changes to the engine included the addition of suppressive fire and disabling vehicles before destroying them.[5] For the first time in a game that was not a shooter nor developed by DICE, Frostbite was employed in Need for Speed, which was released on 15 November.[7] It took a year for EA Black Box, the developer of Need for Speed: The Run, to re-purpose the game engine for driving instead of shooting.[8] On 21 May 2012, DICE rendering architect Johan Andersson said that future personal computer video games running on Frostbite would have to be played on 64-bit operating systems.[9] On 23 October, Medal of Honor became the first game of its series to feature Frostbite in both single and multiplayer.[10] On 26 March 2013, Army of Two became the first third-person shooter and last video game to employ Frostbite 2.[11]

In March 2013, Battlefield executive producer Patrick Bach announced that Frostbite 3 would not support the Wii U, saying that "the Wii U is not a part of our focus right now."[12] The third generation of Frostbite made its debut in Battlefield 4 on 29 October. In the updated engine, the environments became much more dynamic upon the actions of the players and Destruction 4.0, which was known as Levolution in Battlefield 4.[13] On one map of Battlefield 4, it was possible for players to destroy a dam, causing the entire map to be flooded by water.[5] On 13 November in San Jose, Andersson announced that future Frostbite games and an updated version of Battlefield 4 would be powered by Mantle,[14] a low-overhead rendering API co-developed by AMD and DICE.[15] On 15 November, Need for Speed Rivals became the second game of its series to use the game engine and the first since the upgrade to Frostbite 3.[16]

In February 2021, following the announcement of a Nintendo Switch version of Plants vs. Zombies, Frostbite will run on a Nintendo console for the first time.[34] Prior to the game's production, Switch support was added into the Frostbite engine.[35]

The PlayStation 5 and Xbox Series X and Series S versions of FIFA 21, released 4 December 2020, feature graphical enhancements to take advantage of the newer hardware.[36] So far, FIFA 21 is one of two Frostbite games to receive major enhancements for the PlayStation 5 and Xbox Series X and S, with Star Wars receiving support for high frame rates and 4K, alongside visual improvements.[37] It has been rumored that 2021's installment of the NHL series, NHL 22, will run on Frostbite (over the Ignite engine used in previous installments), bringing it to that series for the first time,[38] which would be confirmed when a reveal trailer was released on August 19.[39][40]