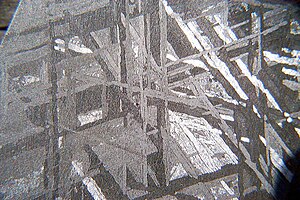 The Widmanstätten pattern that can be found inside iron–nickel meteorites, often related to M-type asteroids.[1]

There are also M-types whose composition is uncertain. For example, 22 Kalliope has an accurately known density that is far too low for a solid metallic object or even a metal rubble pile: a rubble pile of iron-nickel metal would need about 70% porosity which is inconsistent with packing considerations. 22 Kalliope and 21 Lutetia have features in their spectra which appear to indicate the presence of hydration minerals[2] and silicates,[3] anomalously low radar albedos inconsistent with a metallic surface,[4] as well as characteristics more in common with C-type asteroids. A variety of other M-type asteroids do not fit well into a metallic body picture.

M-type spectra are flat to reddish and usually devoid of large features, although subtle absorption features longward of 0.75 μm and shortward of 0.55 μm are sometimes present.[5]

16 Psyche is the largest M-type asteroid, and does appear to be metallic. The Psyche spacecraft is slated to visit 16 Psyche. 21 Lutetia, an anomalous, probably non-metallic body, was the first M-type asteroid to be imaged by a spacecraft when the Rosetta space probe visited it on July 10, 2010. Another M-type asteroid, 216 Kleopatra, was imaged by radar by the Arecibo Observatory in Puerto Rico, and has a dog bone-like shape.[6]

M-type was one of three basic asteroid types in early classifications (the others being the S- and C-types), and was thought to indicate a metallic body.