Main-belt comets (MBCs) are bodies orbiting within the asteroid belt that have shown comet-like activity during part of their orbit. The Jet Propulsion Laboratory defines a main-belt asteroid as an asteroid with a semi-major axis (average distance from the Sun) of more than 2 AU but less than 3.2 AU, and a perihelion (closest approach distance to the Sun) of no less than 1.6 AU.[1] David Jewitt from UCLA points out that these objects are most likely not comets with sublimating ice, but asteroids that exhibit dust activity, and hence he and others started calling these class of objects active asteroids.[2][3] The first main-belt comet discovered is 7968 Elst–Pizarro. It was discovered in 1979 and was found to have a tail by Eric Elst and Guido Pizarro in 1996 and given the cometary designation 133P/Elst-Pizarro.[4][5] 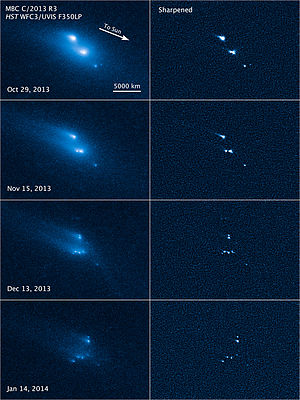 It is not known how an outer Solar System body like the other comets could have made its way into a low-eccentricity orbit typical of the asteroid belt, which is only weakly perturbed by the planets. Hence it is assumed that unlike other comets, the main-belt comets are simply icy asteroids, which formed in an inner Solar System orbit close to their present positions, and that many outer asteroids may be icy.[7]

Some main-belt comets display a cometary dust tail only for a part of their orbit near perihelion. This strongly suggests that volatiles at their surfaces are sublimating, driving off the dust.[8] Activity in 133P/Elst–Pizarro is recurrent, having been observed at each of the last three perihelia.[4] The activity persists for a month or several[7] out of each 5-6 year orbit, and is presumably due to ice being uncovered by minor impacts in the last 100 to 1000 years.[7] These impacts are suspected to excavate these subsurface pockets of volatile material helping to expose them to solar radiation.[7]

When discovered in January 2010, P/2010 A2 (LINEAR) was initially given a cometary designation and considered a member of this group,[9] but P/2010 A2 is now thought to be the remnant of an asteroid-on-asteroid impact.[10][11] Observations of (596) Scheila indicated that large amounts of dust were kicked up by the impact of another asteroid of approximately 35 meters in diameter.

In October 2013, observations of P/2013 R3, taken with the 10.4 m Gran Telescopio Canarias on the island of La Palma, showed that this comet was breaking apart.[13] Inspection of the stacked CCD images obtained on October 11 and 12 showed that the main-belt comet presented a central bright condensation that was accompanied on its movement by three more fragments, A,B,C. The brightest A fragment was also detected at the reported position in CCD images obtained at the 1.52 m telescope of the Sierra Nevada Observatory in Granada on October 12.[13]

NASA reported on a series of images taken by the Hubble Space Telescope between October 29, 2013 and January 14, 2014 that show the increasing separation of the four main bodies.[14] The Yarkovsky–O'Keefe–Radzievskii–Paddack effect, caused by sunlight, increased the spin rate until the centrifugal force caused the rubble pile to separate.[14]

It has been hypothesized that main-belt comets may have been the source of Earth's water, because the deuterium–hydrogen ratio of Earth's oceans is too low for classical comets to have been the principal source.[15] European scientists have proposed a sample-return mission from a MBC called Caroline to analyse the content of volatiles and collect dust samples.[8]

The term 'main-belt comet' is a classification based on orbit and the presence of an extended morphology. It does not imply that these objects are comets or that the material surrounding their nuclei was ejected by the sublimation of volatiles, as on comets.

Identified members of this morphology class include: 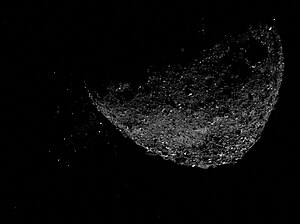 Castalia is a proposed mission concept for a robotic spacecraft to explore 133P/Elst–Pizarro and make the first in situ measurements of water in the asteroid belt, and thus, help solve the mystery of the origin of Earth's water.[17] The lead is Colin Snodgrass, from The Open University in the UK. Castalia was proposed in 2015 and 2016 to the European Space Agency within the Cosmic Vision programme missions M4 and M5, but it was not selected. The team continues to mature the mission concept and science objectives.[17] Because of the construction time required and orbital dynamics, a launch date of October 2028 was proposed.[17]

On January 6, 2019, the OSIRIS-REx mission first observed episodes of particle ejection from 101955 Bennu shortly after entering orbit around the near-Earth asteroid, leading it to be newly classified as an active asteroid. The scale of these observed mass loss events is much smaller than those previously observed at other active asteroids by telescopes, indicating that there is a continuum of mass loss event magnitudes at active asteroids.[16]