A small Solar System body (SSSB) is an object in the Solar System that is neither a planet, a dwarf planet, nor a natural satellite. The term was first defined in 2006 by the International Astronomical Union (IAU) as follows: "All other objects, except satellites, orbiting the Sun shall be referred to collectively as 'Small Solar System Bodies' ".[1] 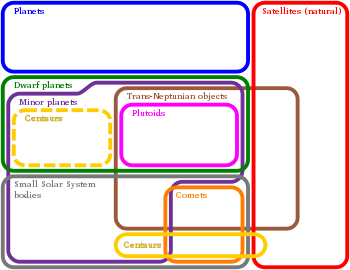 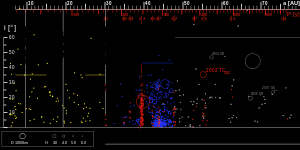 Distribution of centaurs and trans-Neptunian objects.

It is not presently clear whether a lower size bound will be established as part of the definition of small Solar System bodies in the future, or if it will encompass all material down to the level of meteoroids, the smallest macroscopic bodies in orbit around the Sun. (On a microscopic level there are even smaller objects such as interplanetary dust, particles of solar wind and free particles of hydrogen.)

Some of the larger small Solar System bodies may be reclassified in future as dwarf planets, pending further examination to determine whether or not they are in hydrostatic equilibrium.

The orbits of the vast majority of small Solar System bodies are located in two distinct areas, namely the asteroid belt and the Kuiper belt. These two belts possess some internal structure related to perturbations by the major planets (particularly Jupiter and Neptune, respectively), and have fairly loosely defined boundaries. Other areas of the Solar System also encompass small bodies in smaller concentrations. These include the near-Earth asteroids, centaurs, comets, and scattered disc objects.