Short description: Asteroid orbiting the Sun near one of the stable Lagrangian points of Neptune 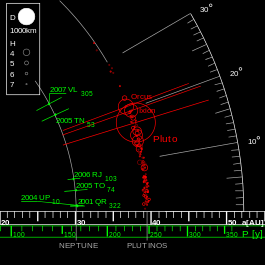 The discovery of 2005 TN53 in a high-inclination (>25°) orbit was significant, because it suggested a "thick" cloud of trojans[2] (Jupiter trojans have inclinations up to 40°[3]), which is indicative of freeze-in capture instead of in situ or collisional formation.[2] It is suspected that large (radius ≈ 100 km) Neptune trojans could outnumber Jupiter trojans by an order of magnitude.[4][5]

In 2010, the discovery of the first known L5 Neptune trojan, 2008 LC18, was announced.[6] Neptune's trailing L5 region is currently very difficult to observe because it is along the line of sight to the center of the Milky Way, an area of the sky crowded with stars.

In 2001, the first Neptune trojan was discovered, 2001 QR322, near Neptune's L4 region, and with it the fifth[note 1] known populated stable reservoir of small bodies in the Solar System. In 2005, the discovery of the high-inclination trojan 2005 TN53 has indicated that the Neptune trojans populate thick clouds, which has constrained their possible origins (see below).

On August 12, 2010, the first L5 trojan, 2008 LC18, was announced.[6] It was discovered by a dedicated survey that scanned regions where the light from the stars near the Galactic Center is obscured by dust clouds.[7] This suggests that large L5 trojans are as common as large L4 trojans, to within uncertainty,[7] further constraining models about their origins (see below).

It would have been possible for the New Horizons spacecraft to investigate L5 Neptune trojans discovered by 2014, when it passed through this region of space en route to Pluto.[5] Some of the patches where the light from the Galactic Center is obscured by dust clouds are along New Horizons's flight path, allowing detection of objects that the spacecraft could image.[7] 2011 HM102, the highest-inclination Neptune trojan known, was just bright enough for New Horizons to observe it in end-2013 at a distance of 1.2 AU.[8] However, New Horizons may not have had sufficient downlink bandwidth, so it was eventually decided to give precedence to the preparations for the Pluto flyby.[9][10]

An animation showing the path of six of Neptune's L4 trojans in a rotating frame with a period equal to Neptune's orbital period. Neptune is held stationary. (Click to view.)

The orbits of Neptune trojans are highly stable; Neptune may have retained up to 50% of the original post-migration trojan population over the age of the Solar System.[2] Neptune's L5 can host stable trojans equally well as its L4.[11] Neptune trojans can librate up to 30° from their associated Lagrangian points with a 10,000-year period.[7] Neptune trojans that escape enter orbits similar to centaurs.[11] Although Neptune cannot currently capture stable trojans,[2] roughly 2.8% of the centaurs within 34 AU are predicted to be Neptune co-orbitals. Of these, 54% would be in horseshoe orbits, 10% would be quasi-satellites, and 36% would be trojans (evenly split between the L4 and L5 groups).[12]

The unexpected high-inclination trojans are the key to understanding the origin and evolution of the population as a whole.[11] The existence of high-inclination Neptune trojans points to a capture during planetary migration instead of in situ or collisional formation.[2][7] The estimated equal number of large L5 and L4 trojans indicates that there was no gas drag during capture and points to a common capture mechanism for both L4 and L5 trojans.[7] The capture of Neptune trojans during a migration of the planets occurs via process similar to the chaotic capture of Jupiter trojans in the Nice model. When Uranus and Neptune are near but not in a mean-motion resonance the locations where Uranus passes Neptune can circulate with a period that is in resonance with the libration periods of Neptune trojans. This results in repeated perturbations that increase the libration of existing trojans causing their orbits to become unstable.[13] This process is reversible allowing new trojans to be captured when the planetary migration continues.[14] For high-inclination trojans to be captured the migration must have been slow,[15] or their inclinations must have been acquired previously.[16]

The first four discovered Neptune trojans have similar colors.[2] They are modestly red, slightly redder than the gray Kuiper belt objects, but not as extremely red as the high-perihelion cold classical Kuiper belt objects.[2] This is similar to the colors of the blue lobe of the centaur color distribution, the Jupiter trojans, the irregular satellites of the gas giants, and possibly the comets, which is consistent with a similar origin of these populations of small Solar System bodies.[2]

The Neptune trojans are too faint to efficiently observe spectroscopically with current technology, which means that a large variety of surface compositions are compatible with the observed colors.[2]

In 2015, the IAU adopted a new naming scheme for Neptune trojans, which are to be named after Amazons, with no differentiation between objects in L4 and L5.[17] The Amazons were an all-female warrior tribe that fought in the Trojan War on the side of the Trojans against the Greeks. As of 2019, the named Neptune trojans are 385571 Otrera (after Otrera, the first Amazonian queen in Greek mythology) and Clete (an Amazon and the attendant to the Amazons' queen Penthesilea, who led the Amazons in the Trojan war).[18][19]

2001 QR322 and 2008 LC18 display significant dynamical instability.[11] This means they could have been captured after planetary migration, but may as well be a long-term member that happens not to be perfectly dynamically stable.[11]

As of February 2020, 29 Neptune trojans are known, of which 24 orbit near the Sun–Neptune L4 Lagrangian point 60° ahead of Neptune,[1] four orbit near Neptune's L5 region 60° behind Neptune, and one orbits on the opposite side of Neptune (L3) but frequently changes location relative to Neptune to L4 and L5.[1] These are listed in the following table. It is constructed from the list of Neptune trojans maintained by the IAU Minor Planet Center[1] and with diameters from Sheppard and Trujillo's paper on 2008 LC18,[7] unless otherwise noted.