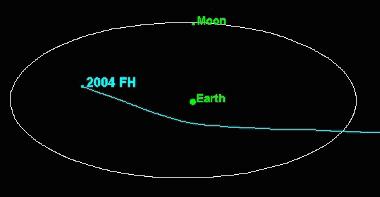 Trajectory of 2004 FH in the Earth–Moon system

This is a list of examples where an asteroid or meteoroid travels close to the Earth. Some are regarded as potentially hazardous objects if they are estimated to be large enough to cause regional devastation.

Near-Earth object detection technology greatly improved about 1998, so objects being detected as of 2004 could have been missed only a decade earlier due to a lack of dedicated near-Earth astronomical surveys. As sky surveys improve, smaller and smaller asteroids are regularly being discovered. The small near-Earth asteroids 2008 TC3, 2014 AA, 2018 LA and 2019 MO are the only four asteroids discovered before impacting into Earth (see asteroid impact prediction). Scientists estimate that several dozen asteroids in the 6–12 m (20–39 ft) size range fly by Earth at a distance closer than the moon every year, but only a fraction of these are actually detected.[1][2]

Timeline of approaches within one lunar distance

The average distance to the Moon (or lunar distance (LD)) is about 384,400 km (238,900 mi), which is around 30 times the diameter of the Earth.[3] Below are lists of close approaches less than one LD for a given year. (See also near-Earth asteroids published by the International Astronomical Union[note 1] and NEO Earth Close Approaches.)

From the list in the first section, these are the closest-known asteroids per year that approach Earth within one lunar distance. More than one asteroid per year may be listed if its geocentric distance[note 2] is within a tenth of the lunar distance, or 0.10 LD. For comparison, since a satellite in a geostationary orbit has an altitude of about 36,000 km (22,000 mi), then its geocentric distance is 0.11 LD (approximately three times the width of the Earth).

The table shows that the years 2016 and 2017 had a total of 13 such close encounters that are known. Of these, eight were undetected until after they'd happened and only one was detected with more than 24 hours' notice. 2018 has fared better so far, with six out of the eight known close encounters being detected beforehand, albeit with less than 24 hours' notice in most cases.

Rows highlighted blue indicate objects discovered more than one year before closest approach, i.e. objects successfully cataloged on a previous orbit, rather than being detected during final approach.

A notable case is the relatively large asteroid Duende, which was predicted nearly a year in advance, coincidentally approaching just a few hours after the unrelated Chelyabinsk meteor, which was unpredicted, but injured thousands of people when it impacted.

From the lists in the first section, these are the largest-known asteroids per year that approach Earth within one LD. (More than one asteroid per year may be listed if its size is 100 m [330 ft] or more.) For comparison, the 1908 Tunguska event was caused by an object about 60–190 m (200–620 ft) in size, while the 2013 Chelyabinsk meteor which injured thousands of people and buildings when it generated a large airburst over Russia was estimated to be just 20 m (66 ft) across.

The table shows about 14 events in the 12 decades of 1900–2020 involving a body with an upper size estimate of 100 m (330 ft) or more making a close approach to Earth within one LD, with one (the Tunguska object) making impact.

The year 2011 was notable as two asteroids with size 100 m (330 ft) or more approached within one lunar distance.

Passed by outside of atmosphere

Objects with distances greater than 100 km (62 mi) are listed here, although there is no discrete beginning of space. 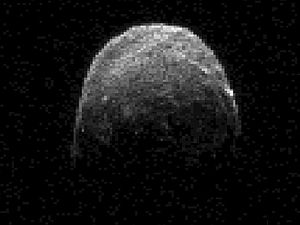 Asteroids with large uncertainty regions are not included.

* Asteroid approach did not occur during an observed apparition. Passage is calculated by integrating the equations of motion.

** Only the nominal (best-fit) orbit shows a passage this close. The uncertainty region is still somewhat large due to a short observation arc.

A list of predicted NEO approaches at larger distances is maintained as a database by the NASA Near Earth Object Program.[22]

** Only the nominal (best-fit) orbit shows a passage this close. The uncertainty region is still somewhat large due to a short observation arc.

All-sky photo with the Earth-grazing meteoroid of 13 October 1990 (the light track across the picture going from the south to the north) taken at Červená hora (Czechoslovakia), one of the stations of the European Fireball Network. The bright track on the left is the Moon.

Objects which enter and then leave Earth's atmosphere, the so-called 'Earth-grazers', are a distinct phenomenon, in as much as entering the lower atmosphere can constitute an impact event rather than a close pass. Earth grazer can also be short for a body that "grazes" the orbit of the Earth, in a different context.