V838 Monocerotis (V838 Mon) is a cataclysmic variable - or outburst - star in the constellation Monoceros about 20,000 light years (6 kpc) from the Sun.[10] The previously unknown star was observed in early 2002 experiencing a major outburst, and was possibly one of the largest known stars for a short period following the outburst. Originally believed to be a typical nova eruption, it was then identified as something completely different. The reason for the outburst is still uncertain, but several conjectures have been put forward, including an eruption related to stellar death processes and a merger of a binary star or planets.

The remnant is evolving rapidly. By 2009 its temperature had increased a bit (since 2005) to 3,270 K and its luminosity was 15,000 times solar (L☉), but its radius had decreased to 380 times that of the Sun (R☉) although the ejecta continues to expand.[4] The opaque ejected dust cloud has completely engulfed a B-type companion.

On January 6, 2002, an unknown star was seen to brighten in the constellation Monoceros, the Unicorn.[11] Being a new variable star, it was designated V838 Monocerotis, the 838th variable star of Monoceros. The initial light curve resembled that of a nova, an eruption that occurs when enough hydrogen gas has accumulated on the surface of a white dwarf from its close binary companion. Therefore, it was also designated Nova Monocerotis 2002. V838 Monocerotis reached maximum visual magnitude of 6.75 on February 6, 2002, after which it started to dim rapidly, as expected. However, in early March the star started to brighten again, especially in infrared wavelengths. Yet another brightening in infrared occurred in early April. In 2003 the star had returned to near its original brightness before the eruption (magnitude 15.6) but now as a red supergiant rather than a blue main-sequence star. The light curve produced by the eruption is unlike anything previously seen.[2] In 2009 the star was about 15,000 L☉,[4] which in the absence of extinction would correspond to an apparent magnitude of 8.5[12] 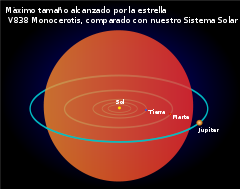 Comparison between the size of V838 Monocerotis and the Inner Solar System.

The star brightened to about a million times solar luminosity[13] and absolute magnitude of −9.8,[6] ensuring that at the time of maximum V838 Monocerotis was one of the most luminous stars in the Milky Way galaxy. The brightening was caused by a rapid expansion of the outer layers of the star. The star was observed using the Palomar Testbed Interferometer, which indicated a radius of 1,570±400 R☉ (comparable to Jupiter's orbital radius), confirming the earlier indirect calculations.[8] At the currently accepted distance of 6,100 pc, the measured angular diameter in late 2004 (1.83 mas) corresponded to a radius of 1,200±150 R☉, but by 2014 it had shrunk to 750±200 R☉, similar to Betelgeuse.[7] The expansion took only a couple of months, meaning that its speed was abnormal. The laws of thermodynamics dictate that expanding gases cool. Therefore, the star became extremely cool and deep red. In fact, some astronomers argue that the spectrum of the star resembled that of L-type brown dwarfs. If that is the case, V838 Monocerotis would be the first known L-type supergiant.[3] However, current estimates of the distance, and hence of the radius, are about 25% lower than assumed in those papers.[6]

There are a handful of outbursts resembling that of V838 Monocerotis. In 1988, a red star was detected erupting in the Andromeda Galaxy. The star, designated M31-RV, reached the absolute bolometric magnitude of −9.95 at maximum (corresponding to a luminosity of 0.75 million L☉) before dimming beyond detectability. A similar eruption occurred in 1994 in the Milky Way (V4332 Sagittarii).[14]

Location of V838 Monocerotis within the Milky Way galaxy.

Some details are emerging on the nature of the star that experienced the outburst. Based on an incorrect interpretation of the light echo the eruption generated, the distance of the star was first estimated to be 1,900 to 2,900 light years. Combined with the apparent magnitude measured from pre-eruption photographs, it was thought to be an underluminous F-type dwarf, which posed a considerable enigma.[15]

More accurate measurements gave a much larger distance, 20,000 light years (6 kpc). It appears that the star was considerably more massive and luminous than the Sun. The star probably has a mass of from 5 to 10 times solar (M☉).[16] It was apparently either a B1.5V star with a B3V companion, or an A0.5V with a B4V companion. In the latter case it would have had a luminosity around 550 L☉ (being 0.43 times as luminous as its companion), and in the former case it would have been more luminous (about 1.9 times as luminous as its companion).[16][17] The star may have originally had a radius roughly 5 R☉ and its temperature would have been that of a B-type star (more than 10,000K but less than 30,000K[16]). Munari et al. (2005) suggested that the progenitor star was a very massive supergiant with an initial mass of about 65 M☉,[9] but this has been contested.[16] There seems to be agreement that the star system is relatively young. Munari et al. conclude that the system may be only about 4 million years old.

Based on the photometric parallax of the companion, Munari et al. calculate a greater distance, 36,000 light years (10 kpc).[9] 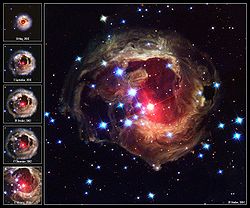 Images showing the expansion of the light echo. Credit: NASA/ESA.

Animation of 11 images of light echo of V838 Mon

Rapidly brightening objects like novae and supernovae are known to produce a phenomenon known as light echo. The light that travels directly from the object arrives first. If there are clouds of interstellar matter around the star, some light is reflected from the clouds. Because of the longer path, the reflected light arrives later, producing a vision of expanding rings of light around the erupted object. The rings appear to travel faster than the speed of light, but in fact they do not.[2][19]

In the case of V838 Monocerotis, the light echo produced was unprecedented and is well documented in images taken by the Hubble Space Telescope. While the photos appear to depict an expanding spherical shell of debris, they are actually formed by the illumination of an ever-expanding ellipsoid with the progenitor star at one focus and the observer at the other. Hence, despite appearances, the structures in these photos are actually concave toward the viewer.

It is not yet clear if the surrounding nebulosity is associated with the star itself. If that is the case, they may have been produced by the star in earlier eruptions which would rule out several models that are based on single catastrophic events.[2] However, there is strong evidence that the V838 Monocerotis system is very young and still embedded in the nebula from which it formed.[13]

The eruption initially emitted at shorter wavelengths (i.e. was bluer), which can be seen in the light echo: the outer border is bluish in the Hubble images.[2]

Two pictures taken in November 2005 and September 2006 showing the changes that occurred to the bright echo of V838 Mon.

So far several rather different explanations for the eruption of V838 Monocerotis have been published.[21]

The outburst of V838 Monocerotis may be a nova eruption after all, albeit a very unusual one. However, this is very unlikely considering that the system includes a B-type star, and stars of this type are young and massive. There has not been enough time for a possible white dwarf to cool and accrete enough material to cause the eruption.[14]

Thermal pulse of a dying star

V838 Monocerotis may be a post-asymptotic giant branch star, on the verge of its death. The nebulosity illuminated by the light echo may actually be shells of dust surrounding the star, created by the star during previous similar outbursts. The brightening may have been a so-called helium flash, where the core of a dying low-mass star suddenly ignites helium fusion disrupting, but not destroying, the star. Such an event is known to have occurred in Sakurai's Object. However, several pieces of evidence support the argument that the dust is interstellar rather than centered on V838 Monocerotis. A dying star that has lost its outer envelopes would be appropriately hot, but the evidence points to a young star instead.[16]

Thermonuclear event within a massive supergiant

According to some evidence, V838 Monocerotis may be a very massive supergiant. Also in this case, the outburst may have been a helium flash. Very massive stars survive multiple such events; however, they experience heavy mass loss (about half of the original mass is lost while in the main sequence) before settling as extremely hot Wolf-Rayet stars. This theory may also explain the apparent dust shells around the star. V838 Monocerotis is located in the approximate direction of the galactic anticenter and off from the disk of the Milky Way. Stellar birth is less active in outer galactic regions, and it is not clear how such a massive star can form there. However, there are very young clusters like Ruprecht 44 and the 4-million-year-old NGC 1893 at a distance of about 7 and 6 kiloparsecs, respectively.[9]

The outburst may have been the result of a so-called mergeburst, the merger of two main sequence stars (or an 8 M☉ main sequence star and a 0.3 M☉ pre-main sequence star). This model is strengthened by the apparent youth of the system and the fact that multiple stellar systems may be unstable. The less massive component may have been in a very eccentric orbit or deflected towards the massive one. Computer simulations have shown the merger model to be plausible. The simulations also show that the inflated envelope would have come almost entirely from the smaller component. In addition, the merger model explains the multiple peaks in the light curve observed during the outburst.[13] In fact, based on further observations of stars similar to V838 Monocerotis, such as V1309 Scorpii, astronomers believe that this is the most likely scenario.(citation?)

Another possibility is that V838 Monocerotis may have swallowed its giant planets. If one of the planets entered into the atmosphere of the star, the stellar atmosphere would have begun slowing down the planet. As the planet penetrated deeper into the atmosphere, friction would become stronger and kinetic energy would be released into the star more rapidly. The star's envelope would then warm up enough to trigger deuterium fusion, which would lead to rapid expansion. The later peaks may then have occurred when two other planets entered into the expanded envelope. The authors of this model calculate that every year about 0.4 planetary capture events occur in Sun-like stars in the Milky Way galaxy, whereas for massive stars like V838 Monocerotis the rate is approximately 0.5–2.5 events per year.[10]