Short description: Stars powered by fusion of hydrogen and helium in shell with an inactive core of carbon and oxygen 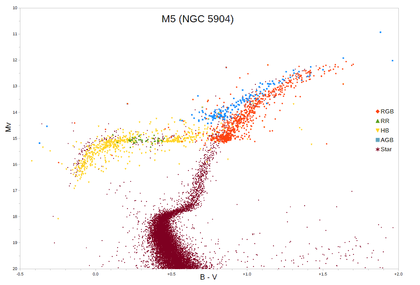 H–R diagram for globular cluster M5, with known AGB stars marked in blue, flanked by some of the more luminous red-giant branch stars, shown in orange

The asymptotic giant branch (AGB) is a region of the Hertzsprung–Russell diagram populated by evolved cool luminous stars. This is a period of stellar evolution undertaken by all low- to intermediate-mass stars (0.5–7/8 solar masses) late in their lives.

Observationally, an asymptotic-giant-branch star will appear as a bright red giant with a luminosity ranging up to thousands of times greater than the Sun. Its interior structure is characterized by a central and largely inert core of carbon and oxygen, a shell where helium is undergoing fusion to form carbon (known as helium burning), another shell where hydrogen is undergoing fusion forming helium (known as hydrogen burning), and a very large envelope of material of composition similar to main-sequence stars (except in the case of carbon stars).[1] 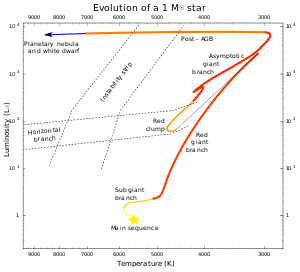 When a star exhausts the supply of hydrogen by nuclear fusion processes in its core, the core contracts and its temperature increases, causing the outer layers of the star to expand and cool. The star becomes a red giant, following a track towards the upper-right hand corner of the HR diagram.[2] Eventually, once the temperature in the core has reached approximately 3×108 K, helium burning (fusion of helium nuclei) begins. The onset of helium burning in the core halts the star's cooling and increase in luminosity, and the star instead moves down and leftwards in the HR diagram. This is the horizontal branch (for population II stars) or red clump (for population I stars), or a blue loop for stars more massive than about 2 M☉.[3]

After the completion of helium burning in the core, the star again moves to the right and upwards on the diagram, cooling and expanding as its luminosity increases. Its path is almost aligned with its previous red-giant track, hence the name asymptotic giant branch, although the star will become more luminous on the AGB than it did at the tip of the red-giant branch. Stars at this stage of stellar evolution are known as AGB stars.[3]

The AGB phase is divided into two parts, the early AGB (E-AGB) and the thermally pulsing AGB (TP-AGB). During the E-AGB phase, the main source of energy is helium fusion in a shell around a core consisting mostly of carbon and oxygen. During this phase, the star swells up to giant proportions to become a red giant again. The star's radius may become as large as one astronomical unit (~215 R☉).[3] 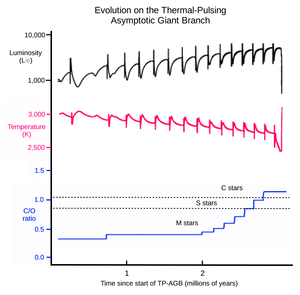 Evolution of a 2 M☉ star on the TP-AGB

AGB stars are typically long-period variables, and suffer mass loss in the form of a stellar wind. For M-type AGB stars, the stellar winds are most efficiently driven by micron-sized grains.[7] Thermal pulses produce periods of even higher mass loss and may result in detached shells of circumstellar material. A star may lose 50 to 70% of its mass during the AGB phase.[8] The mass-loss rates typically range between 10−8 to 10−5 M⊙ year−1, and can even reach as high as 10−4 M⊙ year−1.[9] 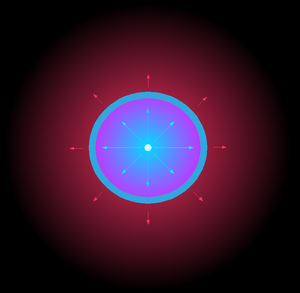 Formation of a planetary nebula at the end of the asymptotic giant branch phase.

The extensive mass loss of AGB stars means that they are surrounded by an extended circumstellar envelope (CSE). Given a mean AGB lifetime of one Myr and an outer velocity of 10 km/s, its maximum radius can be estimated to be roughly 3×1014 km (30 light years). This is a maximum value since the wind material will start to mix with the interstellar medium at very large radii, and it also assumes that there is no velocity difference between the star and the interstellar gas.

These envelopes have a dynamic and interesting chemistry, much of which is difficult to reproduce in a laboratory environment because of the low densities involved. The nature of the chemical reactions in the envelope changes as the material moves away from the star, expands and cools. Near the star the envelope density is high enough that reactions approach thermodynamic equilibrium. As the material passes beyond about 5×109 km the density falls to the point where kinetics, rather than thermodynamics, becomes the dominant feature. Some energetically favorable reactions can no longer take place in the gas, because the reaction mechanism requires a third body to remove the energy released when a chemical bond is formed. In this region many of the reactions that do take place involve radicals such as OH (in oxygen rich envelopes) or CN (in the envelopes surrounding carbon stars). In the outermost region of the envelope, beyond about 5×1011 km, the density drops to the point where the dust no longer completely shields the envelope from interstellar UV radiation and the gas becomes partially ionized. These ions then participate in reactions with neutral atoms and molecules. Finally as the envelope merges with the interstellar medium, most of the molecules are destroyed by UV radiation.[10][11]

The temperature of the CSE is determined by heating and cooling properties of the gas and dust, but drops with radial distance from the photosphere of the stars which are 2,000–3,000 K. Chemical peculiarities of an AGB CSE outwards include:[12]

The dichotomy between oxygen-rich and carbon-rich stars has an initial role in determining whether the first condensates are oxides or carbides, since the least abundant of these two elements will likely remain in the gas phase as COx.

In the dust formation zone, refractory elements and compounds (Fe, Si, MgO, etc.) are removed from the gas phase and end up in dust grains. The newly formed dust will immediately assist in surface catalyzed reactions. The stellar winds from AGB stars are sites of cosmic dust formation, and are believed to be the main production sites of dust in the universe.[13]

The stellar winds of AGB stars (Mira variables and OH/IR stars) are also often the site of maser emission. The molecules that account for this are SiO, H2O, OH, HCN, and SiS.[14][15][16][17][18] SiO, H2O, and OH masers are typically found in oxygen-rich M-type AGB stars such as R Cassiopeiae and U Orionis,[19] while HCN and SiS masers are generally found in carbon stars such as IRC +10216. S-type stars with masers are uncommon.[19]

After these stars have lost nearly all of their envelopes, and only the core regions remain, they evolve further into short-lived protoplanetary nebula. The final fate of the AGB envelopes are represented by planetary nebulae (PNe).[20]

The outer atmosphere of the born-again star develops a stellar wind and the star once more follows an evolutionary track across the Hertzsprung–Russell diagram. However, this phase is very brief, lasting only about 200 years before the star again heads toward the white dwarf stage. Observationally, this late thermal pulse phase appears almost identical to a Wolf–Rayet star in the midst of its own planetary nebula.[21]

Stars such as Sakurai's Object and FG Sagittae are being observed as they rapidly evolve through this phase.

Mapping the circumstellar magnetic fields of thermal-pulsating (TP-) AGB stars has recently been reported[23] using the so called Goldreich-Kylafis effect.

Stars close to the upper mass limit to still qualify as AGB stars show some peculiar properties and have been dubbed super-AGB stars. They have masses above 7 M☉ and up to 9 or 10 M☉ (or more[24]). They represent a transition to the more massive supergiant stars that undergo full fusion of elements heavier than helium. During the triple-alpha process, some elements heavier than carbon are also produced: mostly oxygen, but also some magnesium, neon, and even heavier elements. Super-AGB stars develop partially degenerate carbon–oxygen cores that are large enough to ignite carbon in a flash analogous to the earlier helium flash. The second dredge-up is very strong in this mass range and that keeps the core size below the level required for burning of neon as occurs in higher-mass supergiants. The size of the thermal pulses and third dredge-ups are reduced compared to lower-mass stars, while the frequency of the thermal pulses increases dramatically. Some super-AGB stars may explode as an electron capture supernova, but most will end as oxygen–neon white dwarfs.[25] Since these stars are much more common than higher-mass supergiants, they could form a high proportion of observed supernovae. Detecting examples of these supernovae would provide valuable confirmation of models that are highly dependent on assumptions.