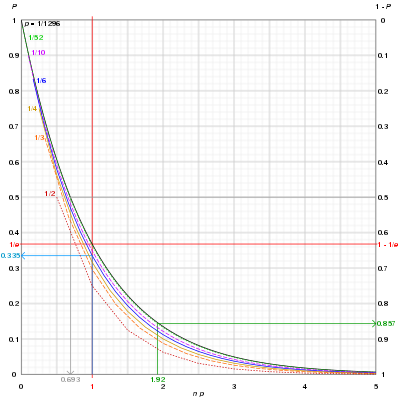 Graphs of probability P of not observing independent events each of probability p after n Bernoulli trials vs np for various p. Three examples are shown:
Blue curve: Throwing a 6-sided die 6 times gives 33.5% chance that 6 (or any other given number) never turns up; it can be observed that as n increases, the probability of a 1/n-chance event never appearing after n tries rapidly converges to 0.
Grey curve: To get 50-50 chance of throwing a Yahtzee (5 cubic dice all showing the same number) requires 0.69 × 1296 ~ 898 throws.
Green curve: Drawing a card from a deck of playing cards without jokers 100 (1.92 × 52) times with replacement gives 85.7% chance of drawing the ace of spades at least once.

In the theory of probability and statistics, a Bernoulli trial (or binomial trial) is a random experiment with exactly two possible outcomes, "success" and "failure", in which the probability of success is the same every time the experiment is conducted.[1] It is named after Jacob Bernoulli, a 17th-century Swiss mathematician, who analyzed them in his Ars Conjectandi (1713).[2]

Since a Bernoulli trial has only two possible outcomes, it can be framed as some "yes or no" question. For example:

Therefore, success and failure are merely labels for the two outcomes, and should not be construed literally. The term "success" in this sense consists in the result meeting specified conditions, not in any moral judgement. More generally, given any probability space, for any event (set of outcomes), one can define a Bernoulli trial, corresponding to whether the event occurred or not (event or complementary event). Examples of Bernoulli trials include:

These are multiplicative inverses, so they multiply to 1, with the following relations:

Note that here the odds are computed by dividing the number of outcomes, not the probabilities, but the proportion is the same, since these ratios only differ by multiplying both terms by the same constant factor.

where [math]\displaystyle{ {n \choose k} }[/math] is a binomial coefficient.

When multiple Bernoulli trials are performed, each with its own probability of success, these are sometimes referred to as Poisson trials.[3]

Consider the simple experiment where a fair coin is tossed four times. Find the probability that exactly two of the tosses result in heads.

Using the equation above, the probability of exactly two tosses out of four total tosses resulting in a heads is given by: