Haüyne belongs to the hexatetrahedral class of the isometric system, 43m, space group P43n. It has one formula unit per unit cell (Z = 1), which is a cube with side length of 9 Å. More accurate measurements are as follows:

All silicates have a basic structural unit that is a tetrahedron with an oxygen ion O at each apex, and a silicon ion Si in the middle, forming (SiO4)4−. In tectosilicates (framework silicates) each oxygen ion is shared between two tetrahedra, linking all the tetrahedra together to form a framework. Since each O is shared between two tetrahedra only half of it "belongs" to the Si ion in either tetrahedron, and if no other components are present then the formula is SiO2, as in quartz.

Aluminium ions Al, can substitute for some of the silicon ions, forming (AlO4)5− tetrahedra. If the substitution is random the ions are said to be disordered, but in haüyne the Al and Si in the tetrahedral framework are fully ordered.[3]

Si has a charge 4+, but the charge on Al is only 3+. If all the cations (positive ions) are Si then the positive charges on the Si's exactly balance the negative charges on the O's. When Al replaces Si there is a deficiency of positive charge, and this is made up by extra positively charged ions (cations) entering the structure, somewhere in between the tetrahedra.

In haüyne these extra cations are sodium Na+ and calcium Ca2+, and in addition the negatively charged sulfate group (SO4)2− is also present. In the haüyne structure the tetrahedra are linked to form six-membered rings that are stacked up in an ..ABCABC.. sequence along one direction, and rings of four tetrahedra are stacked up parallel to another direction. The resulting arrangement forms continuous channels that can accommodate a large variety of cations and anions.[9]

Haüyne crystallizes in the isometric system forming rare dodecahedral or pseudo-octahedral crystals that may reach 3 cm across; it also occurs as rounded grains. The crystals are transparent to translucent, with a vitreous to greasy luster. The color is usually bright blue, but it can also be white, grey, yellow, green and pink.[3][4][5] In thin section the crystals are colorless or pale blue,[5][11] and the streak is very pale blue to white.

Haüyne is isotropic. Truly isotropic minerals have no birefringence, but haüyne is weakly birefringent when it contains inclusions.[5][11] The refractive index is 1.50; although this is quite low, similar to that of ordinary window glass, it is the largest value for minerals of the sodalite group.[11] It may show reddish orange to purplish pink fluorescence under longwave ultraviolet light.[4][5]

Cleavage is distinct to perfect, and twinning is common, as contact, penetration and polysynthetic twins.[3] The fracture is uneven to conchoidal, the mineral is brittle, and it has hardness ​5 1⁄2 to 6, almost as hard as feldspar. All the members of the sodalite group have quite low densities, less than that of quartz; haüyne is the densest of them all, but still its specific gravity is only 2.44 to 2.50.[11] If haüyne is placed on a glass slide and treated with nitric acid HNO3, and then the solution is allowed to evaporate slowly, monoclinic needles of gypsum form. This distinguishes haüyne from sodalite, which forms cubic crystals of chlorite under the same conditions.[11] The mineral is not radioactive.[2] 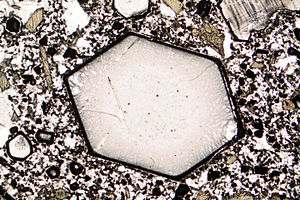 A six-sided phenocryst of haüyne (diameter about 1 mm) surrounded by a fine-grained groundmass in a foidite (volcanic rock) from Melfi (Italy), as seen in thin section under a petrographic microscope