Thermochemistry is the study of the heat energy which is associated with chemical reactions and/or phase changes such as melting and boiling. A reaction may release or absorb energy, and a phase change may do the same. Thermochemistry focuses on the energy exchange between a system and its surroundings in the form of heat. Thermochemistry is useful in predicting reactant and product quantities throughout the course of a given reaction. In combination with entropy determinations, it is also used to predict whether a reaction is spontaneous or non-spontaneous, favorable or unfavorable.

Endothermic reactions absorb heat, while exothermic reactions release heat. Thermochemistry coalesces the concepts of thermodynamics with the concept of energy in the form of chemical bonds. The subject commonly includes calculations of such quantities as heat capacity, heat of combustion, heat of formation, enthalpy, entropy, and free energy. 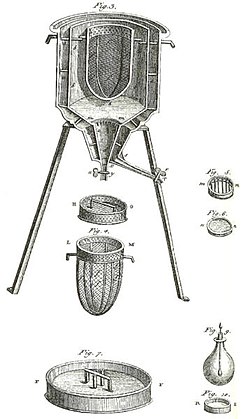 The world's first ice-calorimeter, used in the winter of 1782–83, by Antoine Lavoisier and Pierre-Simon Laplace, to determine the heat evolved in various chemical changes; calculations which were based on Joseph Black's prior discovery of latent heat. These experiments mark the foundation of thermochemistry.

Thermochemistry rests on two generalizations. Stated in modern terms, they are as follows:[1]

These statements preceded the first law of thermodynamics (1845) and helped in its formulation.

Thermochemistry also involves the measurement of the latent heat of phase transitions. Joseph Black had already introduced the concept of latent heat in 1761, based on the observation that heating ice at its melting point did not raise the temperature but instead caused some ice to melt.[4]

The measurement of heat changes is performed using calorimetry, usually an enclosed chamber within which the change to be examined occurs. The temperature of the chamber is monitored either using a thermometer or thermocouple, and the temperature plotted against time to give a graph from which fundamental quantities can be calculated. Modern calorimeters are frequently supplied with automatic devices to provide a quick read-out of information, one example being the differential scanning calorimeter.

Several thermodynamic definitions are very useful in thermochemistry. A system is the specific portion of the universe that is being studied. Everything outside the system is considered the surroundings or environment. A system may be:

A system undergoes a process when one or more of its properties changes. A process relates to the change of state. An isothermal (same-temperature) process occurs when temperature of the system remains constant. An isobaric (same-pressure) process occurs when the pressure of the system remains constant. A process is adiabatic when no heat exchange occurs.