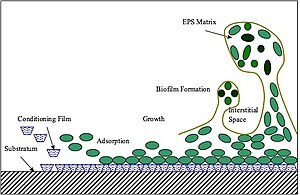 Extracellular polymeric substances (EPSs) are natural polymers of high molecular weight secreted by microorganisms into their environment.[1] EPSs establish the functional and structural integrity of biofilms, and are considered the fundamental component that determines the physiochemical properties of a biofilm.[2]

EPSs are mostly composed of polysaccharides (exopolysaccharides) and proteins, but include other macro-molecules such as DNA, lipids and humic substances. EPSs are the construction material of bacterial settlements and either remain attached to the cell's outer surface, or are secreted into its growth medium. These compounds are important in biofilm formation and cells' attachment to surfaces. EPSs constitute 50% to 90% of a biofilm's total organic matter.[2][3][4]

Capsular exopolysaccharides can protect pathogenic bacteria against desiccation and predation, and contribute to their pathogenicity.[6] Bacteria existing in biofilms are less vulnerable compared to planktonic bacteria, as the EPS matrix is able to act as a protective diffusion barrier.[7] The physical and chemical characteristics of bacterial cells can be affected by EPS composition, influencing factors such as cellular recognition, aggregation, and adhesion in their natural environments.[7] Furthermore, the EPS layer acts as a nutrient trap, facilitating bacterial growth.[7]

The exopolysaccharides of some strains of lactic acid bacteria, e.g., Lactococcus lactis subsp. cremoris, contribute a gelatinous texture to fermented milk products (e.g., Viili), and these polysaccharides are also digestible.[8][9] An example of the industrial use of exopolysaccharides is the application of dextran in panettone and other breads in the bakery industry.[10]

Exopolysaccharides can facilitate the attachment of nitrogen-fixing bacteria to plant roots and soil particles, which mediates a symbiotic relationship.[11] This is important for colonization of roots and the rhizosphere, which is a key component of soil food webs and nutrient cycling in ecosystems. It also allows for successful invasion and infection of the host plant.[11]

Bacterial extracellular polymeric substances can aid in bioremediation of heavy metals as they have the capacity to adsorb metal cations, among other dissolved substances.[12] This can be useful in the treatment of wastewater systems, as biofilms are able to bind to and remove metals such as copper, lead, nickel, and cadmium.[12] The binding affinity and metal specificity of EPSs varies, depending on polymer composition as well as factors such as concentration and pH.[12]

In a geomicrobiological context, EPSs have been observed to affect precipitation of minerals, particularly carbonates.[13] EPS may also bind to and trap particles in biofilm suspensions, which can restrict dispersion and element cycling.[13] Sediment stability can be increased by EPS, as it influences cohesion, permeability, and erosion of the sediment.[13] There is evidence that the adhesion and metal-binding ability of EPS affects mineral leaching rates in both environmental and industrial contexts.[13] These interactions between EPS and the abiotic environment allow for EPS to have a large impact on biogeochemical cycling.

Predator-prey interactions between biofilms and bacterivores, such as the soil-dwelling nematode Caenorhabditis elegans, had been extensively studied. Via the production of sticky matrix and formation of aggregates, Yersinia pestis biofilms can prevent feeding by obstructing the mouth of C. elegans.[14] Moreover, Pseudomonas aeruginosa biofilms can impede the slithering motility of C. elegans, termed as 'quagmire phenotype', resulting in trapping of C. elegans within the biofilms and preventing the exploration of nematodes to feed on susceptible biofilms.[15] This significantly reduced the ability of predator to feed and reproduce, thereby promoting the survival of biofilms.

Due to the growing need to find a more efficient and environmentally friendly alternative to conventional waste removal methods, industries are paying more attention to the function of bacteria and their EPS sugars in bioremediation.[16]

Researchers found that adding EPS sugars from cyanobacteria to wastewaters removes heavy metals such as copper, cadmium and lead.[16] EPS sugars alone can physically interact with these heavy metals and take them in through biosorption.[16] The efficiency of removal can be optimized by treating the EPS sugars with different acids or bases before adding them to wastewater.[16] Some contaminated soils contain high levels of polycyclic aromatic hydrocarbons (PAHs); EPSs from the bacterium Zoogloea sp. and the fungus Aspergillus niger, are efficient at removing these toxic compounds.[17] EPSs contain enzymes such as oxidoreductase and hydrolase, which are capable of degrading PAHs.[17] The amount of PAH degradation depends on the concentration of EPSs added to the soil. This method proves to be low cost and highly efficient.[17]

In recent years, EPS sugars from marine bacteria have been found to speed up the cleanup of oil spills.[18] During the Deepwater Horizon oil spill in 2010, these EPS-producing bacteria were able to grow and multiply rapidly.[18] It was later found that their EPS sugars dissolved the oil and formed oil aggregates on the ocean surface, which sped up the cleaning process.[18] These oil aggregates also provided a valuable source of nutrients for other marine microbial communities. This let scientists modify and optimize the use of EPS sugars to clean up oil spills.[18]