Short description: Change in the action or side effects of a drug caused

Drug interactions occur when a drug's mechanism of action is disturbed by the concomitant administration of substances such as foods, beverages, or other drugs. The cause is often the inhibition of the specific receptors available to the drug, forcing the drug molecules to bind to other non-intended targets which results in an array of side-effects.

For example, consuming both Zolpidem (i.e., Ambien) and alcohol (both depressants) influxes the GABAA receptors, resulting in the over-stimulation of sleep-inducing chemicals, resulting in unconsciousness. The risk of a drug-drug interaction increases with the number of drugs used.[1] Over a third (36%) of the elderly in the U.S. regularly use five or more medications or supplements, and 15% are at risk of a significant drug-drug interaction.[2]

Drug interactions can be additive (the result is what you expect when you add together the effect of each drug taken independently), synergistic (combining the drugs leads to a larger effect than expected), or antagonistic (combining the drugs leads to a smaller effect than expected).[3] On some occasions it is difficult to distinguish between synergistic or additive interactions, since the individual effects of each drug may vary from patient to patient.[4] A synergistic interaction may be beneficial for patients, but may also increase the risk of overdose. Drug interaction predictors enable risk assessment of multiple drugs simultaneously with visualizations risk per therapeutic class, to indicate a spectrum from no risk to high risk.[5]

Both synergy and antagonism can occur during different phases of the interaction between a drug and an organism. The different responses of a drug receptor have resulted in several classifications, such as partial agonist, competitive agonist, an inverse agonist. These concepts have fundamental applications in the pharmacodynamics of these interactions. The proliferation of existing classifications at this level and lack of knowledge around drug mechanisms means that it is difficult to offer a clear classification for these concepts. It is possible that authors would misapply any given classification.[6]

Direct interactions between drugs are also possible and may occur when two drugs are mixed before intravenous injection. For example, mixing Thiopentone and Suxamethonium can lead to the precipitation of thiopentone.[7]

The change in an organism's response upon administration of a drug is an important factor in pharmacodynamic interactions. These changes are extraordinarily difficult to classify given the wide variety of modes of action that exist, and the fact that many drugs can cause their effect through several different mechanisms. This wide diversity also means that in all but the most obvious cases, it is important to investigate and understand these mechanisms. A well-founded suspicion exists that there are more unknown interactions than known ones. 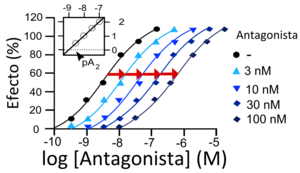 Pharmacodynamic interactions can occur on:

Modifications in the effect of a drug are caused by differences in the absorption, transport, distribution, metabolism, or excretion of one or both of the drugs compared with the expected behaviour of each drug when taken individually. These changes are modifications in the concentration of the drugs. In this respect, two drugs can be homergic if they have the same effect on the organism and heterergic if their effects are different.

Some drugs, such as prokinetic agents, increase the speed with which a substance passes through the intestines. If a drug is present in the digestive tract's absorption zone for a short amount of time, its blood concentration will decrease. The opposite will occur with drugs that decrease intestinal motility.

Certain drugs require an acid stomach pH for absorption. Others require the basic pH of the intestines. Any modification in the pH could change this absorption. In the case of antacids, an increase in pH can inhibit the absorption of other drugs such as zalcitabine (absorption can be decreased by 25%), tipranavir (25%) and amprenavir (up to 35%). However, this occurs less often than an increase in pH causes an increase in absorption. Such occurs when cimetidine is taken with didanosine. In this case, a gap of two to four hours between taking the two drugs is usually sufficient to avoid the interaction.[11]

The main interaction mechanism is competition for plasma protein transport. In these cases the drug that arrives first binds with the plasma protein, leaving the other drug dissolved in the plasma, which modifies its concentration. The organism has mechanisms to counteract these situations (by, for example, increasing plasma clearance), which means that they are not usually clinically relevant. However, these situations should be taken into account if other associated problems are present such as when the method of excretion is affected.[14] 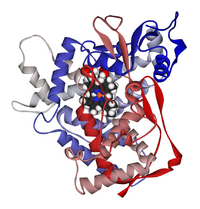 Diagram of cytochrome P450 isoenzyme 2C9 with the haem group in the centre of the enzyme.

Many drug interactions are due to alterations in drug metabolism.[15] Further, human drug-metabolizing enzymes are typically activated through the engagement of nuclear receptors.[15] One notable system involved in metabolic drug interactions is the enzyme system comprising the cytochrome P450 oxidases.

Cytochrome P450 is a very large family of haemoproteins (hemoproteins) that are characterized by their enzymatic activity and their role in the metabolism of a large number of drugs.[16] Of the various families that are present in humans, the most interesting in this respect are the 1, 2 and 3, and the most important enzymes are CYP1A2, CYP2C9, CYP2C19, CYP2D6, CYP2E1 and CYP3A4.[17] The majority of the enzymes are also involved in the metabolism of endogenous substances, such as steroids or sex hormones, which is also important should there be interference with these substances. The function of the enzymes can either be stimulated (enzyme induction) or inhibited (enzyme inhibition).

If drug A is metabolized by a cytochrome P450 enzyme and drug B inhibits or decreases the enzyme's activity, then drug A will remain with high levels in the plasma for longer as its inactivation is slower. As a result, enzymatic inhibition will cause an increase in the drug's effect. This can cause a wide range of adverse reactions.

It is possible that this can occasionally lead to a paradoxical situation, where the enzymatic inhibition causes a decrease in the drug's effect: if the metabolism of drug A gives rise to product A2, which actually produces the effect of the drug. If the metabolism of drug A is inhibited by drug B, the plasma concentration of A2 will decrease and so will the final effect of the drug.

If drug A is metabolized by a cytochrome P450 enzyme and drug B induces or increases the enzyme's activity, then blood plasma concentrations of drug A will quickly fall as its inactivation will take place more rapidly. As a result, enzymatic induction will cause a decrease in the drug's effect.

It can often occur that a patient is taking two drugs that are enzymatic inductors; one inductor and the other inhibitor ;or both inhibitors, which greatly complicates the control of an individual's medication and the avoidance of possible adverse reactions.

An example of this is shown in the following table for the CYP1A2 enzyme, which is the most common enzyme found in the human liver. The table shows the substrates (drugs metabolized by this enzyme) and the inductors and inhibitors of its activity:[17]

Enzyme CYP3A4 is the most commonly used substrate in a great number of drugs. Over a hundred drugs depend on its metabolism for their activity and many others act on the enzyme as inductors or inhibitors.

Some foods also act as inductors or inhibitors of enzymatic activity. The following table shows the most common: 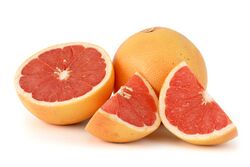 Grapefruit juice can act as an enzyme inhibitor.

Any study of pharmacological interactions between particular medicines should also discuss the likely interactions of some medicinal plants. The effects caused by medicinal plants should be considered in the same way as those of medicines as their interaction with the organism gives rise to a pharmacological response. Other drugs can modify this response and also the plants can give rise to changes in the effects of other active ingredients.

There is little data available regarding interactions involving medicinal plants for the following reasons: 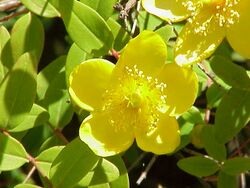 St John's wort can act as an enzyme inductor.

They are usually included in the category of foods as they are usually taken as tea or food supplement. However, medicinal plants are increasingly being taken in a manner more often associated with conventional medicines: pills, tablets, capsules, etc. 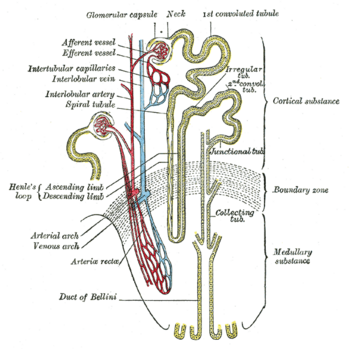 Only the free fraction of a drug that is dissolved in the blood plasma can be removed through the kidney. Therefore, drugs that are tightly bound to proteins are not available for renal excretion, as long as they are not metabolized when they may be eliminated as metabolites.[20] Creatinine clearance is used as a measure of kidney functioning but it is only useful in cases where the drug is excreted in an unaltered form in the urine. The excretion of drugs from the kidney's nephrons has the same properties as that of any other organic solute: passive filtration, reabsorption, and active secretion. In the latter phase, the secretion of drugs is an active process that is subject to conditions relating to the saturability of the transported molecule and competition between substrates. Therefore, these are key sites where interactions between drugs could occur. Filtration depends on a number of factors including the pH of the urine, it having been shown that the drugs that act as weak bases are increasingly excreted as the pH of the urine becomes more acidic, and the inverse is true for weak acids. This mechanism is of great use when treating intoxications (by making the urine more acidic or more alkali) and it is also used by some drugs and herbal products to produce their interactive effect.

Bile excretion is different from kidney excretion as it always involves energy expenditure in active transport across the epithelium of the bile duct against a concentration gradient. This transport system can also be saturated if the plasma concentrations of the drug are high. Bile excretion of drugs mainly takes place where their molecular weight is greater than 300 and they contain both polar and lipophilic groups. The glucuronidation of the drug in the kidney also facilitates bile excretion. Substances with similar physicochemical properties can block the receptor, which is important in assessing interactions. A drug excreted in the bile duct can occasionally be reabsorbed by the intestines (in the enterohepatic circuit), which can also lead to interactions with other drugs.

Examples of herb-drug interactions include, but are not limited to:

The mechanisms underlying most herb-drug interactions are not fully understood.[29] Interactions between herbal medicines and anticancer drugs typically involve enzymes that metabolize cytochrome P450.[27] For example, St. John's Wort has been shown to induce CYP3A4 and P-glycoprotein in vitro and in vivo.[27]

Among US adults older than 56, 4% are taking medication and or supplements that put them at risk of a major drug interaction.[33] Potential drug-drug interactions have increased over time[34] and are more common in the less-educated elderly even after controlling for age, sex, place of residence, and comorbidity.[35]