Cockayne syndrome (CS), also called Neill-Dingwall syndrome, is a rare and fatal autosomal recessive neurodegenerative disorder characterized by growth failure, impaired development of the nervous system, abnormal sensitivity to sunlight (photosensitivity), eye disorders and premature aging.[1][2][3] Failure to thrive and neurological disorders are criteria for diagnosis, while photosensitivity, hearing loss, eye abnormalities, and cavities are other very common features.[3] Problems with any or all of the internal organs are possible. It is associated with a group of disorders called leukodystrophies, which are conditions characterized by degradation of neurological white matter. The underlying disorder is a defect in a DNA repair mechanism.[4] Unlike other defects of DNA repair, patients with CS are not predisposed to cancer or infection.[5] Cockayne syndrome is a rare but destructive disease usually resulting in death within the first or second decade of life. The mutation of specific genes in Cockayne syndrome is known, but the widespread effects and its relationship with DNA repair is yet to be well understood.[5]

It is named after English physician Edward Alfred Cockayne (1880–1956) who first described it in 1936 and re-described in 1946.[6] Neill-Dingwall syndrome was named after Mary M. Dingwall and Catherine A. Neill.[6] These two scientists described the case of two brothers with Cockayne syndrome and asserted it was the same disease described by Cockayne. In their article, the two contributed to the signs of the disease through their discovery of calcifications in the brain. They also compared Cockayne syndrome to what is now known as Hutchinson–Gilford progeria syndrome (HGPS), then called progeria, due to the advanced aging that characterizes both disorders.[6] 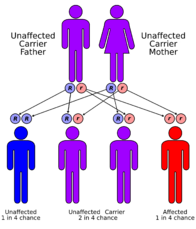 In contrast to cells with normal repair capability, CSA and CSB deficient cells are unable to preferentially repair cyclobutane pyrimidine dimers induced by the action of ultraviolet (UV) light on the template strand of actively transcribed genes.[12] This deficiency reflects the loss of ability to perform the DNA repair process known as transcription coupled nucleotide excision repair (TC-NER).[13]

Within the damaged cell, the CSA protein normally localizes to sites of DNA damage, particularly inter-strand cross-links, double-strand breaks and some monoadducts.[14] CSB protein is also normally recruited to DNA damaged sites, and its recruitment is most rapid and robust as follows: interstrand crosslinks > double-strand breaks > monoadducts > oxidative damage.[14] CSB protein forms a complex with another DNA repair protein, SNM1A (DCLRE1A), a 5' – 3' exonuclease, that localizes to inter-strand cross-links in a transcription dependent manner.[15] The accumulation of CSB protein at sites of DNA double-strand breaks occurs in a transcription dependent manner and facilitates homologous recombinational repair of the breaks.[16] During the G0/G1 phase of the cell cycle, DNA damage can trigger a CSB-dependent recombinational repair process that uses an RNA (rather than DNA) template.[17]

The premature aging features of CS are likely due, at least in part, to the deficiencies in DNA repair (see DNA damage theory of aging).[13]

People with this syndrome have smaller than normal head sizes (microcephaly), are of short stature (dwarfism), their eyes appear sunken, and they have an "aged" look. They often have long limbs with joint contractures (inability to relax the muscle at a joint), a hunched back (kyphosis), and they may be very thin (cachetic), due to a loss of subcutaneous fat. Their small chin, large ears, and pointy, thin nose often give an aged appearance.[8] The skin of those with Cockayne syndrome is also frequently affected: hyperpigmentation, varicose or spider veins (telangiectasia),[8] and serious sensitivity to sunlight are common, even in individuals without XP-CS. Often patients with Cockayne Syndrome will severely burn or blister with very little heat exposure. The eyes of patients can be affected in various ways and eye abnormalities are common in CS. Cataracts and cloudiness of the cornea (corneal opacity) are common. The loss of and damage to the nerves of the optic nerve, causing optic atrophy, can occur.[3] Nystagmus, or involuntary eye movement, and pupils that fail to dilate demonstrate a loss of control of voluntary and involuntary muscle movement.[8] A salt and pepper retinal pigmentation is also a typical sign. Diagnosis is determined by a specific test for DNA repair, which measures the recovery of RNA after exposure to UV radiation. Despite being associated with genes involved in nucleotide excision repair (NER), unlike xeroderma pigmentosum, CS is not associated with an increased risk of cancer.[5]

Prenatal evaluation is possible. Amniotic fluid cell culturing is used to demonstrate that fetal cells are deficient in RNA synthesis after UV irradiation.

Imaging studies reveal a widespread absence of the myelin sheaths of the neurons in the white matter of the brain and general atrophy of the cortex.[5] Calcifications have also been found in the putamen, an area of the forebrain that regulates movements and aids in some forms of learning,[8] along with the cortex.[6] Additionally, atrophy of the central area of the cerebellum found in patients with Cockayne syndrome could also result in the lack of muscle control, particularly involuntary, and poor posture typically seen.

There is no permanent cure for this syndrome, although patients can be symptomatically treated. Treatment usually involves physical therapy and minor surgeries to the affected organs, such as cataract removal.[3] Also wearing high-factor sunscreen and protective clothing is recommended because Cockayne Syndrome patients are very sensitive to UV radiation.[18] Optimal nutrition can also help. Genetic counseling for the parents is recommended, as the disorder has a 25% chance of being passed to any future children, and prenatal testing is also a possibility.[3] Another important aspect is the prevention of recurrence of CS in other siblings. Identification of gene defects involved makes it possible to offer genetic counseling and antenatal diagnostic testing to the parents who already have one affected child.[19]

The recent research on Jan 2018 mentions different CS features that are seen globally with similarities and differences: CS has an incidence of 1 in 250,000 live births, and a prevalence of approximately 1 per 2.5 million, which is remarkably consistent across various regions globally:[21][22]